Dubbed “farmHand,” the four-fingered robotic manipulator incorporates technology that can be applied to vehicle tires and shoes. 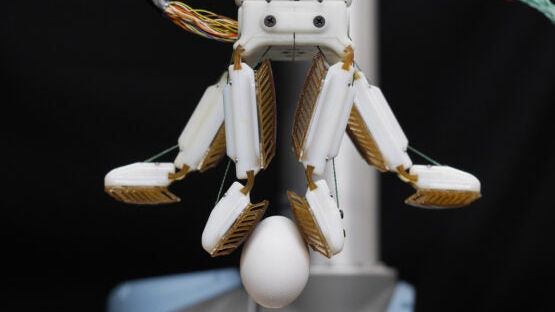 The robotic farmHand was developed at Stanford University's biomimetics lab and incorporates fingertips and an adhesive inspired by acrobatic gecko lizards, which can climb vertical surfaces unaided by liquids or surface tension. (Biomimetics and Dextrous Manipulation Lab, Stanford University)

Mimicking a human’s ability to adjust tension in the hand according to the power or delicacy required to grasp an object has met with limited success until now, as roboticists have developed a “hand” featuring sticky fingertips inspired by the gecko lizard.

Researchers say they devised a robotic hand that is able to grasp a basketball and carefully handle an egg or a delicate tomato that would have defeated previous robotic attempts. “You’ll see robotic hands do a power grasp and a precision grasp and then kind of imply that they can do everything in between,” said Wilson Ruotolo, lead author of the study published in Science Robotics.

Ruotolo and his collaborators wanted to create manipulators that are simultaneously dexterous and strong. He and Dane Brouwer of Stanford University’s Biomimetics and Dextrous Manipulation Lab developed the robotic “farmHand,” which can handle diverse objects ranging from raw eggs to jugs of liquids and an angle grinder.

The four-fingered farmHand was inspired not only by a human hand but also the gecko’s sticky toes. The adhesive toepads allow these acrobatic carnivores to adhere to surfaces without the use of liquids or surface tension. The grippy material for farmHand was developed by the Stanford lab, led by co-author Mark Cutkosky, a professor of mechanical engineering.

The gecko-inspired adhesive uses microscopic flaps to create a firm grip, using what is called a Van der Waals force — a weak intermolecular force that results from differences in the positions of electrons on the outsides of molecules. The adhesive’s grip, therefore, requires little force to be strong yet leaves behind no residue.

“The first applications of the gecko adhesives had to do with climbing robots, climbing people or grasping very large, very smooth objects in space. But we’ve always had it in our minds to use them for more down-to-earth applications,” Cutkosky said. “The problem is that… gecko adhesives are actually very fussy.”

Gecko adhesives must connect with a surface in just the right way to activate the essential Van der Waals force. It is easy to apply smoothly onto a flat surface, but grasping an object with multiple gecko patches at various angles presents a challenge.

To address this challenge, the researchers designed finger pads for farmHand that are made of a collapsible rib structure, which buckles with little force. The ribs consistently buckle, regardless of location or angle of contact. This means that the adhesive pads apply equal force and prevent premature slipping.

“If you move these ribs, the buckling results in a similar force no matter where you start,” said Brouwer. “It’s a simple, physical behavior that could be deployed even in spaces outside of robotics, perhaps as shoe tread or all-terrain tires.” Commercial applications for the technology are a possibility.

The authors also developed tendon-like structures for the robotic hand that allow a hyperextended pinch. Other robotic hands pinch objects in a shape resembling a “C,” while farmHand pinches with the ends of its fingers pressed pad to pad, thus giving the adhesives more surface area to work with.

The authors found that computer simulations predicting the interactions of a robot with something as soft as an heirloom tomato can be inaccurate. Despite this, they were successful due to 3D printing parts and testing them quickly: something that would have been impossible just a few years ago.