Incentivizing businesses to use wood residue as biofuel and engineered wood building products could fund efforts to save forests. 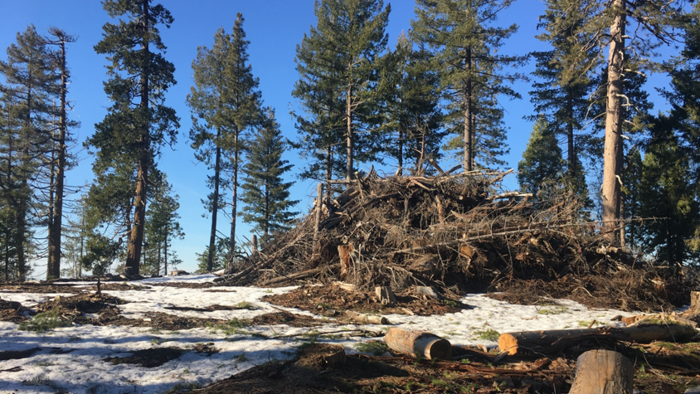 Thinning treatments reduce the risk of wildfire and provide ecological benefits to forests but also generate wood residues that are burnt or left to decay, like this burn pile of underbrush, releasing carbon dioxide. New analysis by the University of California, Berkeley, shows how giving incentives to businesses to convert residues into biofuels and engineered lumber could fund forest thinning treatments while preventing the release of carbon. (Bodie Cabiyo, Courtesy of UC Berkeley)

Scientists at the University of California, Berkeley have offered a new perspective on reducing the threat of wildfires by thinning forests while limiting carbon emissions.

“It’s hard to manage our forests without releasing carbon,” said Bodie Cabiyo of the university’s Energy and Resources Group. He is a co-author of the study suggesting a market for small-diameter trees can create economic incentives for improving forest management and prevent trees’ stored carbon from being released through controlled burns.

By using wood carefully and efficiently and creating innovative products from waste wood, Cabiyo said “both net carbon benefits and wildfire mitigation benefits” can be achieved.

California says it is committed to achieving full carbon neutrality by 2045. In cooperation with the U.S. Forest Service, the state is managing 1 million acres of state forests through prescribed burns, thinning trees and harvesting timber. The goal is to reduce overall carbon emissions, but also to invest in carbon sinks, such as forests, to remove carbon from the air.

“Creating a market for forest biomass produced by forest thinning could reduce wildfire hazard, prevent air pollution from smoke and potentially displace fossil fuels and increase water availability,” study co-author Brandon Collins of the U.S. Forest Service said. “We need to deal with this small diameter biomass, and there is a solution if we could just find a way to connect the dots politically and economically.”

The study’s authors say that bringing innovative wood products to market could simultaneously generate revenue for the state and private landowners while thinning forests and limiting emissions.

“A lot of people are pointing towards forests as a source of sucking carbon out of the air and not adding carbon to the atmosphere,” Cabiyos said. Noting that effective forest management of 1 million acres each year is costly, he said that “it’s still unclear where that money is going to come from.”

Co-author Daniel Sanchez said he hopes the study aligns the twin objectives of reducing wildfires and meeting lofty emission goals. The study could provide a “framework for managing temperate forests across the world while trying to meet the needs of a changing climate,” he said.

Forest management now relies on removing small trees and underbrush and leaving behind the larger, fire-resistant mature trees. Large trees have a ready market, but wood residue from forest thinning is not marketable and is either burned or left to decay.

“If you drive through these forest treatment projects, you’ll see massive burn piles that can be over 20 feet tall — the size of multiple school buses — and they’re just sitting there waiting to be combusted,” Cabiyo said. “That’s a lot of carbon that is going to go back into the atmosphere.”

Wood residue can be transformed into engineered lumber, such as oriented strand board, which is made by compressing wood particles and adhesives into sheets. Homes in California and elsewhere are made of such products. Wood residue can also be used as biofuel at power plants that, if they have carbon scrubbers, can eliminate the carbon dioxide they generate, the authors contend.

The study offered a scenario in which the California government creates incentives for local businesses to use engineered wood in building “multi-unit affordable housing.”

Cabiyo said that the proposed thinning treatments would generate a “lot more lumber and wood residues,” raising the question of where that material will end up. He agreed that using engineered timber for affordable housing would reduce carbon emissions because otherwise, builders would use concrete and steel, both of which have a significant carbon footprint.

Thinning treatments could reduce wildfire risk. In 2021, 2.6 million acres burned in California in the second-worst season on record, burning down homes, businesses and large trees.