VIDEO: Men Jailed After Mowing Woman Down During Car Chase 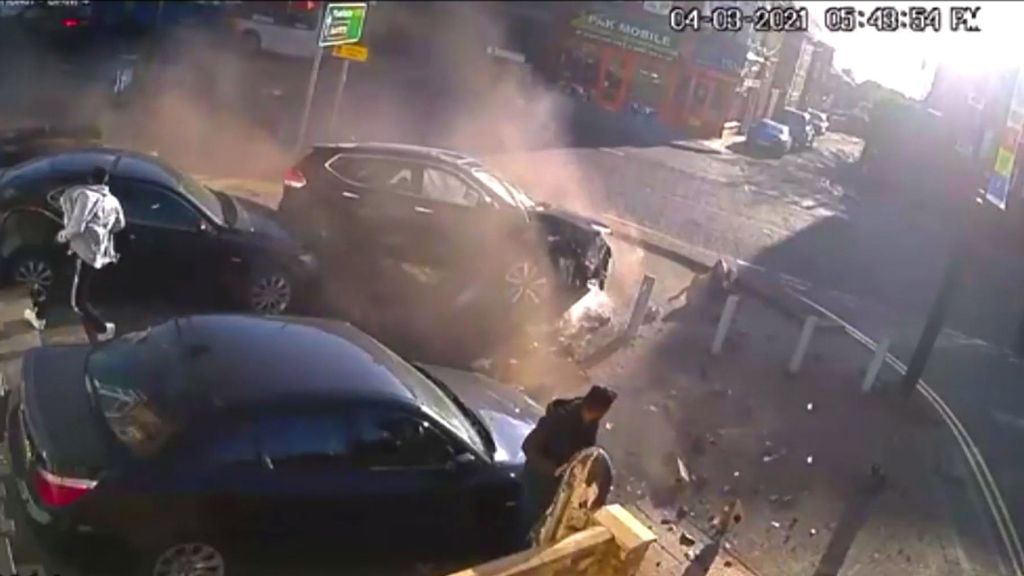 A stolen SUV piles into a pedestrian in Manchester, England on April 3. The three men who caused the pile-up were sentenced on Dec. 10. (Greater Manchester Police/Zenger)

Three men in a stolen SUV who ran over a woman while fleeing police in Manchester, England, have been sentenced for their roles in the melee. Two of those involved in the April incident received jail sentences on Dec. 10.

Footage of the harrowing scene in Manchester’s Cheetham Hill neighborhood has been shared online by the Greater Manchester Police, along with an accompanying account of the incident.

“The trio were brought to justice by detectives from GMP Salford’s dedicated taskforce tackling organized crime and concludes the latest investigation under Operation Naseby — which has seen 250 arrests made and 113 stolen vehicles seized since April 2020,” authorities said.

Deans was driving the vehicle, which officers from the department’s Tactical Vehicle Intercept Unit on Operation Naseby spotted as a stolen Nissan X-Trail.

“The Xtrail — taken from an address in Longsight a month previously — sped off when asked to pull over. Officers then gave pursuit.”

During the chase, Deans veered onto the wrong side of the road, reaching speeds of 50 mph in a 30-mph zone, in addition to running red lights and driving recklessly toward oncoming traffic, police said.

“After a two-minute pursuit into the north of Manchester, Deans lost control of the vehicle and smashed into a combination of a wall, bollards, parked vehicles and a 36-year-old woman as she was walking on the pavement.”

The suspects abandoned their vehicle and ran from the scene — first by dashing to the right in the footage, then doubling back through the scene in the opposite direction — as the injured woman attempted to drag herself clear of the tangled cars.

The woman, whose name was not disclosed, was hospitalized for eight days “with life-changing injuries, including a fractured spine, broken pelvis and a broken leg,” police said.

“Despite attempting to run from police, Deans, Keogh and Barrett were arrested and taken to custody where they were later charged for a series of offenses.

“Deans, of no fixed abode, pleaded guilty to causing serious injury by dangerous driving, handling stolen goods, disqualified driving, driving without insurance, failing to stop for police, and failing to stop at the scene of a collision; he was ordered to serve four years and six months in prison.

“Keogh, of Beckett Street, Manchester, admitted theft without consent, being carried in a stolen motor vehicle and possession of a bladed article and was also sentenced to spend one year and nine months in prison.

“Barrett, of Tarpoley Avenue, Manchester, was also sentenced to a community order, curfew with a tag, and disqualified from driving after already pleading guilty to theft without consent and being carried in a stolen motor vehicle.”

The April incident could have been much worse, police said.

“Anyone can see from the shocking footage of this collision that these three men are very lucky to be facing even more serious charges purely due to innocent woman miraculously not suffering more life-threatening injuries — and we continue to wish her well with her recovery.”

Police also defended the decision to pursue the trio by the officers involved.

“It’s vital as part of Operation Naseby that we use all available resources to take such criminals off the streets of Salford and the surrounding areas, and this includes utilizing our Vehicle Interceptors to pursue and catch offenders who go about their unlawful activity by using stolen cars and having total disregard for others.”