Sun Stroke: Spacecraft Touches The Sun For The First Time

NASA’s Parker Solar Probe — the fastest man-made object ever — survived the heat of the sun, revealing the start of its mysteries. 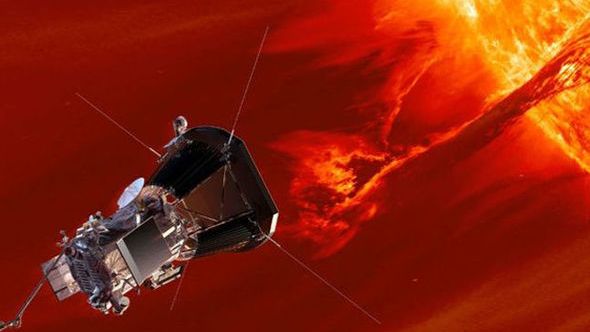 Launched in 2018, NASA's Parker Solar Probe has added to its list of achievements by becoming the first spacecraft to descend into the solar atmosphere and survive the experience. (NASA)

A space mission has reached into the solar atmosphere, known as the corona, withstanding a temperature of 2 million degrees Fahrenheit and making observations that could previously only be conjectured.

A paper presented at the fall meeting of the American Geophysical Union this week provided data from the April 2021 entry of NASA’s Parker Solar Probe into the solar corona, becoming the first spacecraft to enter the outer margins of the sun.

“This marks the achievement of the primary objective of the Parker mission and a new era for understanding the physics of the corona,” said lead author Justin Kasper, a professor at the University of Michigan and deputy chief technology officer at BWX Technologies.

The mission was the first to make direct observations of the solar atmosphere. Beyond its outer boundaries, the sun’s gravitational and magnetic forces directly control the solar wind, which consists of a dangerous stream of charged particles or plasma, that is regularly deflected by Earth’s atmosphere. Launched in 2018, the probe spent five hours in direct contact with the sun’s plasma.

The goal of the probe is to learn how the sun works, according to study co-author Michael Stevens, an astrophysicist at the Center for Astrophysics. “The only way to do that is for the spacecraft to cross the outer boundary, which scientists call the Alfvén point. So a basic part of this mission is to be able to measure whether we crossed this critical point,” said Stevens.

The corona is where the sun’s magnetic fields keep plasma and turbulent solar winds in check. At the Alfvén point, when solar winds exceed the critical speed, they break free and lash out at the cosmos.

“If you look at close-up pictures of the Sun, sometimes you’ll see these bright loops or hairs that seem to break free from the Sun but then reconnect with it,” Stevens said. “That’s the region we’ve flown into — an area where the plasma, atmosphere and wind are magnetically stuck and interacting with the Sun.”

Dangerous outbursts from the sun, such as high-speed solar wind and solar flares, can impact the Earth by causing power and communications outages. Co-author Anthony Case of the Center for Astrophysics said the Solar Probe Cup on the spacecraft is an amazing bit of engineering.

“The amount of light hitting the Parker Solar Probe determines how hot the spacecraft will get,” Case said. The cup is on the exterior of the craft and has no protection. While making its measurements in the corona, it glows red-hot and surpasses 1,800 degrees Fahrenheit. Made of tungsten, niobium, molybdenum and sapphire, it resisted degradation.

Making three passes above and below the surface of the sun, the probe was not only the first spacecraft to enter the solar corona, but it was also the first to touch the solar atmosphere. It is also the fastest vehicle ever produced. It has already made several other discoveries about space weather and the dangers posed by superfast space dust.

“We have been observing the sun and its corona for decades, and we know there is interesting physics going on there to heat and accelerate the solar wind plasma. Still, we cannot tell precisely what that physics is,” said Nour Raouafi of Johns Hopkins University, who also worked on the study. “With [the] Parker Solar Probe now flying into the magnetically dominated corona, we will get long-awaited insights into the inner workings of this mysterious region.”

The next step for the probe is to dive deeper and stay longer in the solar atmosphere to learn more about the origins of solar winds and coronal heating.