As trade winds begin to pick up around the NBA, Jerami Grant is a hot commodity. Which teams make sense as a landing spot? 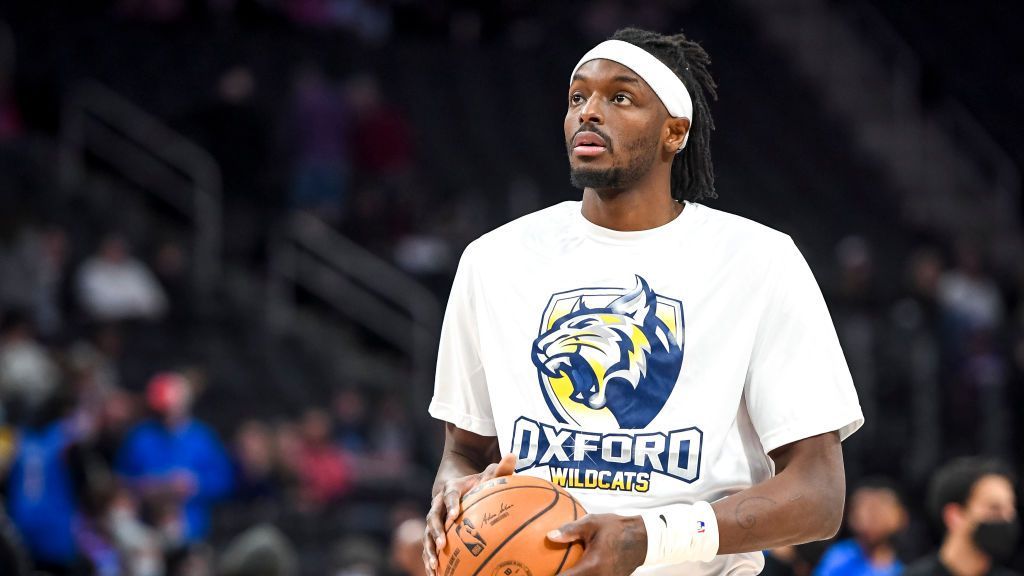 Jerami Grant #9 of the Detroit Pistons warms up wearing a shirt in support of the victims of the Oxford High School shooting. Grant is one of the NBA’s most sought-after players in potential deals as February’s trade deadline approaches. (Nic Antaya/Getty Images)

According to The Athletic’s Shams Charania, Detroit Pistons wing Jerami Grant is one of the NBA’s most sought-after players in potential deals as February’s trade deadline approaches. This shouldn’t come as a surprise, even with Grant sidelined due to torn ligaments in his right thumb. Once Grant is fully healthy, which should be around February anyways, he can provide a huge boost to just about any win-now team.

Since taking on more of an expanded role with the Pistons, he has averaged 21.6 points, 4.7 rebounds, 2.7 assists and 1.1 blocks per game on a respectable 55.2% True Shooting percentage. Presumably on a winning team in his next stop, Grant should slide back into the coveted-role-player spot he thrived in during his stints with the Oklahoma City Thunder and Denver Nuggets.

Detroit is 4-21 this season, and No. 1 overall pick Cade Cunningham is beginning to blossom and showcase his superstar upside. With Grant’s injury, now is the perfect time to let Cunningham spread his wings even further and recoup some assets for the Pistons’ best trade chip.

Charania mentioned many teams have been calling Detroit consistently about Grant, including the Los Angeles Lakers and Portland Trail Blazers. So, which teams should be blowing up the Pistons’ phone lines trying to acquire a souped-up three-and-D wing who can fit like a glove on any roster? Let’s examine some potential blockbusters revolving around Grant.

Excuse me, because the idea of a potential Rudy Gobert and Grant frontcourt pairing would be filthy for Utah. Immediately, this trade vaults the Jazz into the Western Conference’s top tier of Finals contenders alongside the Golden State Warriors and Phoenix Suns.

If the Jazz wanted to make an all-in Finals push, getting aggressive for Grant is the perfect scenario. Imagine them trotting out this starting lineup: Mike Conley, Donovan Mitchell, Bojan Bogdanovic, Grant, Gobert. Wow, I can’t stop thinking about how lethal that would be on top of their copious amounts of depth.

But how can the Jazz get into the Grant sweepstakes? Here’s where it gets interesting.

Detroit receives a culture-setter in O’Neale, a young asset in Butler, plus some future draft capital. Ingles likely never suits up for the Pistons and either gets flipped or hits the buyout market to join another win-now contender.

In the end, Utah trades two fan favorites. However, the risk-reward ratio certainly leans heavily toward the latter. Grant in Utah is one of my favorite fits.

The Wizards are beginning to fall back down to Earth after their hot start to the season. With pressure building as Bradley Beal inches closer to unrestricted free agency this offseason, Washington could be a sleeper team to watch out for when it comes to making an aggressive move to appease their superstar.

Grant alongside Beal and Spencer Dinwiddie would be a lot of fun in D.C., but what’s the cost? It won’t be cheap for the Wizards, who would have to give up one of their top young assets in the process.

For a team in win-now mode, acquiring Grant makes a lot of sense for the Wizards. He would slide right into the starting lineup and provide two-way versatility they desperately need. Although giving up a prospect like Avdija is a tough pill to swallow, getting aggressive could be what seals the deal on Beal staying long-term in the nation’s capital.

Luka Doncic is a superstar. Kristaps Porzingis is playing with confidence we haven’t seen since his New York Knicks days. However, the Mavericks are in desperate need of another reliable long-term piece. Grant would be such a fun fit alongside Doncic and Porzingis, providing exactly what they need as look to make noise in the Western Conference playoffs.

Detroit likely asks for a player like Jalen Brunson in return, but Dallas should be very wary of doing that. Brunson is earning himself a hefty pay raise as he moves toward restricted free agency, but he’s more than worth that price after his recent stretch of excellent performances for Dallas. The Mavericks could still make an interesting offer, countering with the following package:

Detroit nabs an intriguing prospect in Green on top of two ideal complementary pieces to go alongside Cunningham. Powell would be able to stretch the floor, plus Finney-Smith is a bulky wing who can add some defensive value.

Dallas would be such an interesting team if they were to get serious on chasing Grant as their third option behind Doncic and Porzingis.

For years, Minnesota has been missing a complementary frontcourt piece to pair with Karl-Anthony Towns’ elite offensive ceiling. Well, the answer could be poached on the open market with Grant.

Grant is the perfect piece to fit alongside Towns, Anthony Edwards and D’Angelo Russell. On a solid contract that won’t break the bank (although a long-term extension should soon be in the cards wherever he lands), Grant provides exactly what is missing in Minnesota.

However, the cost could be a gut punch to some Timberwolves fans who are enjoying the recent development of their young role players:

As you can see, no draft compensation goes back to Detroit here because they receive arguably the two best young assets listed thus far in McDaniels and Bolmaro. Both would certainly fit Detroit’s long-term plan of building around with Cunningham as their No. 1 option. Meanwhile, Minnesota gets a much-needed boost in terms of two-way versatility.

This feels like a true win-win scenario for both sides, another deal I absolutely love the more I look it over.

The Kings are in desperation mode and seem like a strong candidate to shake things up sometime soon. Adding a piece like Grant would help alleviate some serious defensive concerns, plus add a true No. 2 scoring option alongside De’Aaron Fox.

The question is, would the Kings’ likely offer be enough to entice Detroit?

There has been smoke billowing around a potential Bagley-to-Detroit deal for quite sometime. If the Pistons still wanted to explore that possibility, now could be the perfect time. The only way this package gets Sacramento into the final conversations is the draft picks. Would the Kings be willing to give up two future protected first-round picks to acquire Grant? If so, Detroit would certainly listen intently.

Detroit brings back the 2018 No. 2 overall on top of some eye-opening draft picks, which could become gold mines soon enough. Is this a trade that makes sense for both sides?

Blazers superstar Damian Lillard is frustrated, and he’s begging for more help. Portland is stuck in the bottom-end of playoff contenders with no real chance to climb the Western Conference rankings anytime soon. With one of the NBA’s most inconsistent defenses, Grant would be a much-needed spark to place alongside Lillard and C.J. McCollum as a true third option.

The question is, what makes sense for Detroit in a potential return package for Grant? As mentioned, the interest around Grant is robust, so Detroit will demand a pretty compelling package in exchange for the 27-year-old. Perhaps this three-for-one swap could be compelling for both sides:

Detroit lands an intriguing young asset in Little as well as some additional future draft capital. Who knows if Covington even plays for Detroit, but for including him is necessary for salary-matching purposes. I love this deal for the Blazers, and I bet Lillard would appreciate it as well.

Somehow, the Lakers always make their way into discussions for any potential impact player. From the Pistons’ point of view, does Los Angeles even have enough to make an enticing offer for someone like Grant? I would say it’s doubtful, but that doesn’t mean the Lakers won’t try.

The Lakers’ best trade asset at this point is Talen Horton-Tucker, who signed a three-year extension this past offseason. THT is their lone remaining young asset as well, so he would certainly need to be included in a deal for Grant. Horton-Tucker is an intriguing fit to think about alongside Cunningham in Detroit, but does it really move the needle for the Pistons’ front office? Unless the Lakers toss in some serious draft assets, the Pistons likely hang up the phone and look elsewhere without hesitation.

For Los Angeles, this is probably the best offer they can come up with in this scenario:

So, it’s really a package built around THT and a little draft capital. Rondo would immediately get bought out, and Nunn wouldn’t be in the Pistons’ rotation. This trade feels very one-sided, which makes a Lakers offer very low on the potential totem pole. Since Charania did mention the Lakers’ interest, though, it’s intriguing to see what they could actually offer.

Every team in the NBA could use a player like Grant, who provides endless amounts of versatility and winning qualities. After proving he can handle an expanded role in Detroit, Grant’s price has increased significantly.

Stay tuned for the latest on the Grant situation, plus what should be a very explosive trade deadline. Also, check out recent articles breaking down potential trade destinations for Ben Simmons, Domantas Sabonis, Myles Turner, Caris LeVert and Terrence Ross.