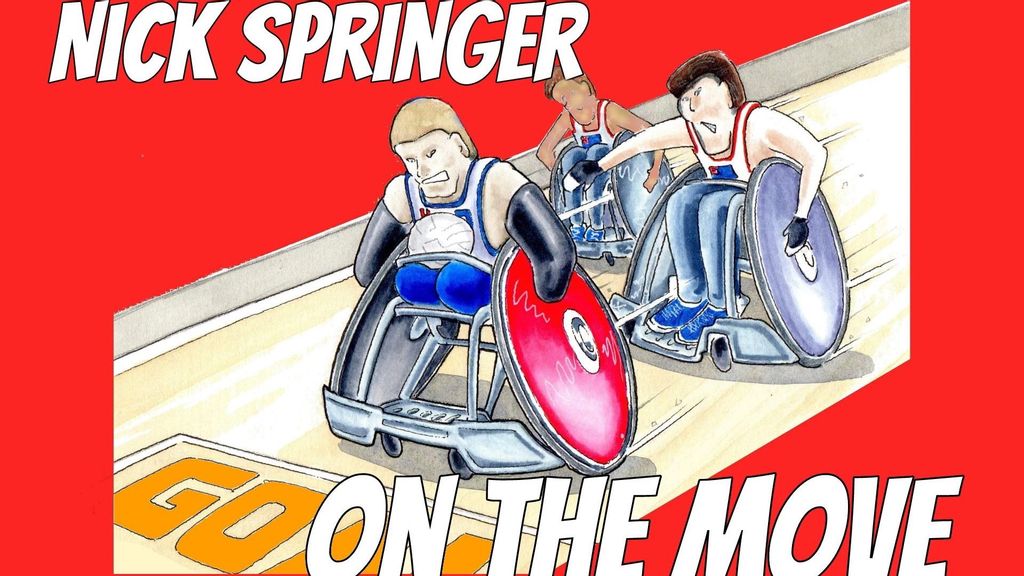 When Jennifer Stratton’s daughter Caitlin wanted to share a photo with her kindergarten class of an athlete wearing his gold medal in wheelchair rugby at the 2008 Paralympic Games, the teacher wouldn’t allow it.

The teacher said it would scare the children.

That’s when Stratton, an educator herself, knew something had to change.

After doing research and finding very little about people with disabilities that was positive and encouraging, Stratton decided to write a children’s book about athlete Nick Springer’s life because, she says, she knew it belonged in the classroom.

The quadruple amputee, who earned several gold medals at championships throughout his life, died at age 35 on April 21.

“Nick Springer on the Move” written by Stratton and illustrated by mouth painter Christopher Kuster is a captivating, brightly illustrated story of the many challenges Springer overcame to represent his country and earn a gold medal.

Springer is a cousin of Stratton’s husband, so she is quite familiar with his story.

Springer was born in Manhattan in 1985 and contracted meningococcal meningitis in 1999, causing the partial amputation of his arms and legs. An avid hockey player in his youth, Springer turned to wheelchair rugby to remain competitive. He quickly excelled at the sport, eventually earning a spot on Team USA that achieved ultimate success in Beijing in 2008. He also competed at the 2012 Paralympics in London, where he won bronze.

Stratton had interviewed Springer extensively after deciding to write the book. She recognized the dearth of children’s books about people with disabilities, and especially amputees, who are commonly depicted as pirates and villains.

“It’s very difficult to find books that portray amputees like Nick, who is an athlete, someone who represents our country, someone who overcomes tremendous obstacles,” Stratton said.  “’Nick Springer on the Move’ is filling a void.”

Springer was an active participant in the development of the book.

“He loved the idea because of the way people interacted with him,” Stratton said. “He knew people needed to be more educated. He was open about being disabled and how he lived his life.”

Stratton contacted the Association of Mouth and Foot Painting Artists Worldwide because she wanted a disabled artist to bring something to the story that she as an able-bodied person couldn’t. She also knew the world of publishing doesn’t employ many people with disabilities.

MFPA connected her with artist Kuster, who was paralyzed in a shallow-water diving accident in 1992. He paints by manipulating a paintbrush he holds in his mouth.

Illustrating a book was unusual for Kuster; most of his work through MFPA was for greeting cards and calendars.  But his love of drawing cartoons, cars and other action-related illustrations proved a natural fit.

He was instantly attracted to the project. “Here’s something I can check off my bucket list, which was a children’s book, and show the world my style of illustration and what I’m able to do in my situation,” he said.

The book contains 28 illustrations by Kuster, who brings the rough-and-tumble action of wheelchair rugby to life.

“The first thing I thought about was how do I create a children’s book where someone loses their limbs without it turning into a horror story,” he said.

“I actually got to see them play the game, and what I remember the most was how violent it was and how fast-paced it was,” Kuster said. “Here’s this bunch of guys crashing into each other and falling out of their chairs. I remember the loud smashing of the chairs, so that was something I tried to portray with colors and large words. I went back to the old Batman comic style with words like ‘Pow, Bam and Smash,’ words to portray activity and people leaning forward.”

It took Kuster a year to complete the illustrations. “There were a lot more illustrations that ended up on the floor than were actually in the book,” he said. “Some of them didn’t have the punch that I really wanted it to have.”

Stratton says the core message of the book is to redefine ability for the reader.

“When people see Nick with his loss of limbs or see Chris with paralysis, they think they’re unable to do certain things,” she said. “Through Nick’s story, he shows the reader you can achieve great things without having hands or having partial limbs.  Chris shows you can create beautiful images with your mouth.”

Stratton has read the book to children and is often amazed by their responses. One statement that impressed her was when a child said, “Thank you for telling us the truth. Now I realize there’s so much that people with disabilities can do, they just do it differently.”

Kuster says there’s a message for adults in the children’s book, as well.

“I want the book to let everyone know people can do anything they put their mind to, no matter what their challenges are,” he said. “And I think that needs to happen at an early age.

“Some of these kids might have some trauma in their life, and they can reflect back on a young man that made the best of the cards that were dealt to him. Everyone has the ability to do the same thing. We can all achieve greatness no matter where we start from.”