Officer’s blows to the back bring lifeless boy back from the brink. 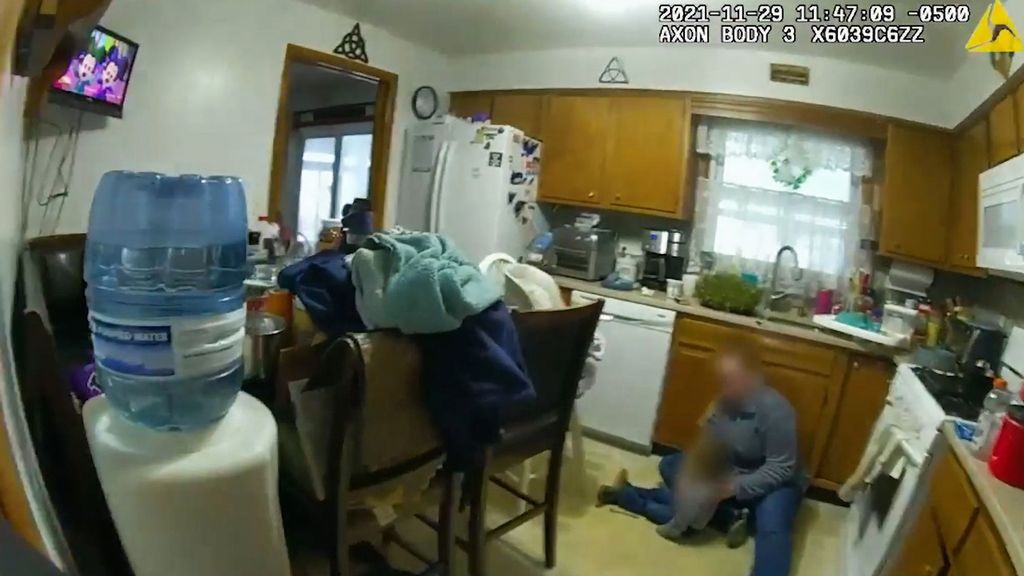 Bodycam footage shows a mother and her 2-year-old son (lower right, faces obscured) on the floor of their kitchen when a New York trooper entered the scene to help the youngster, who was choking on a piece of food. (New York State Police/Zenger)

A New York state trooper saved the life of a two-year-old boy who was choking on a piece of pancake.

The incident took place in Binghamton, New York, when trooper David Draudt responded to a call about a child choking and being unresponsive.

Body camera footage of the incident starts by shows the officer getting out of his police car and running up to a home.

The boy’s grandmother, who has not been named, waves him inside the house, and he runs in.

There, the 2-year-old, who has not been named, can be seen lying motionless on the floor in the kitchen.

Draudt enters the kitchen and the unnamed mother of the young boy can be seen cradling him in her arms.

In the footage, to which officer Draudt added his own commentary of how the incident unfolded, it is revealed that the young boy had apparently choked on a piece of pancake and that the mother had attempted to perform the Heimlich maneuver to dislodge the piece of food trapped in the boy’s windpipe.

The Heimlich maneuver — also known as abdominal thrusts — is a first-aid procedure that is used to dislodge foreign objects that have obstructed the airway. It is named after a Cincinnati physician who developed the technique in the early 1970s.

The young boy was “new to starting some dry foods,” said Draudt, who explained he first tried “to clear his airway with my finger, but his jaws not closed, so then I just began giving him back blows until I could hear him start to breathe again. At least I knew what I was doing was working.”

He was then able to retrieve the piece of food from the young boy’s mouth.

“I’m just happy that I was in the right place at the right time,” the officer said.

In sharing the footage online, the New York State police said, “The boy’s mom says they are able to be with their son today because of Trooper Draudt.

Unfortunately, the Binghamton youngster has plenty of company in experiencing a traumatic choking.

“The most common cause of nonfatal choking in young children is food,” reports the New York Department of Health. “At least one child dies from choking on food every five days in the U.S., and more than 12,000 children are taken to a hospital emergency room each year for food-choking injuries.”

The health department offers a variety of strategies for helping prevent such incidents: