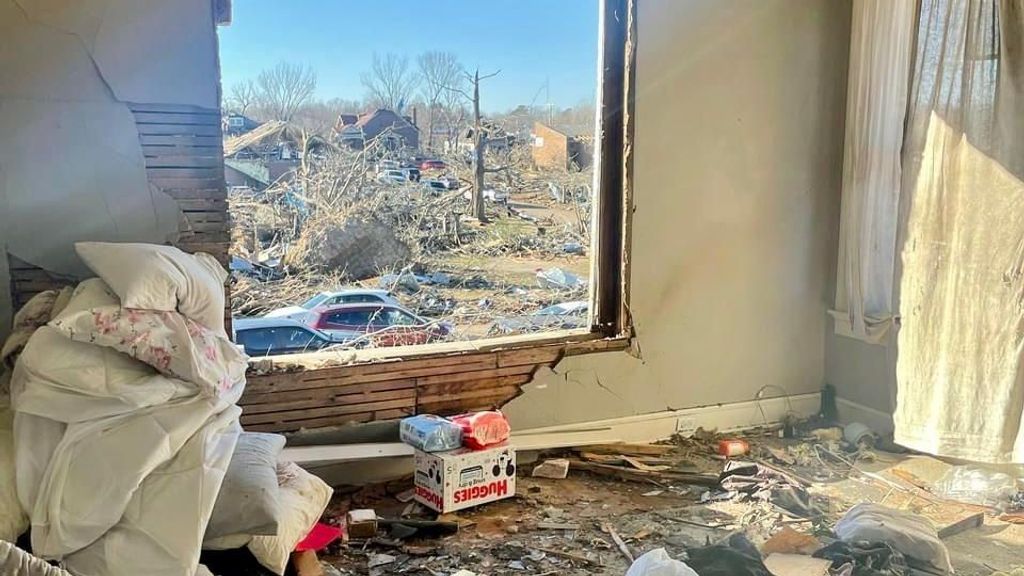 Devastation from tornadoes that hit Kentucky on Dec. 10. Aid is pouring in from national and international agencies. (Courtesy of SmartAID)

Following four weekend tornadoes that killed dozens and destroyed homes and businesses in western Kentucky, disaster-aid and humanitarian groups from as far away as China and Israel are lending assistance.

At least 74 people died when a swarm of tornadoes hit Kentucky and other states on Dec. 10.

Gov. Andy Beshear said on Dec. 13 that there were 74 confirmed deaths in Kentucky, which was the hardest hit.

In his briefing, the governor said the ages of those lost range from 5 months to 86 years, and at least six of those lost were younger than 18. He said 105 people remain unaccounted for, and that the final tally of death and destruction may take a week or more.

President Joseph R. Biden Jr. on Dec. 12 declared that a major disaster exists in Kentucky and ordered federal aid to supplement state and local recovery efforts in the areas affected, the governor said.

“China is willing to provide emergency humanitarian assistance to the people affected by the disaster in accordance with the needs of the U.S.,” the China International Development Cooperation Agency said on Dec. 13.

Volunteers for Israeli humanitarian aid organization SmartAID are working with local partners to install a coordination center for emergency workers in hard-hit Mayfield and Benton, Kentucky.

“Kentucky was the worst-hit state by far in an unusual mid-December swarm of twisters across the Midwest and the South that leveled entire communities, leaving tens of thousands homeless,” said Zahavi.

“Most communities have been left without access to power, clean water, telecommunication, medical treatment and basic survival items.”

SmartAID was founded in 2019 with the mission of integrating technology into humanitarian aid settings worldwide.

Israeli Ambassador to the United States Michael Herzog tweeted Israel’s condolences to those who lost loved ones. He and Foreign Minister Yair Lapid said that Israel “stands together with the American people and is ready to offer any assistance needed.”

In addition to aid from the American Red Cross, other organizations providing aid include World Vision, a Christian humanitarian group, which began transporting food and other relief supplies to Kentucky on Dec. 12; and Samaritan’s Purse, based in Boone, North Carolina, which has sent volunteers to Kentucky. Arkansas, Tennessee and Illinois.