VIDEO: Under Fire: Gunman Who Held Police At Bay In Standoff Died In His Burning Home

After the shooting ended, a small fire erupted in the garage of the suspect's residence.
By Joseph Golder December 13, 2021
Facebook
Twitter
Linkedin
Email 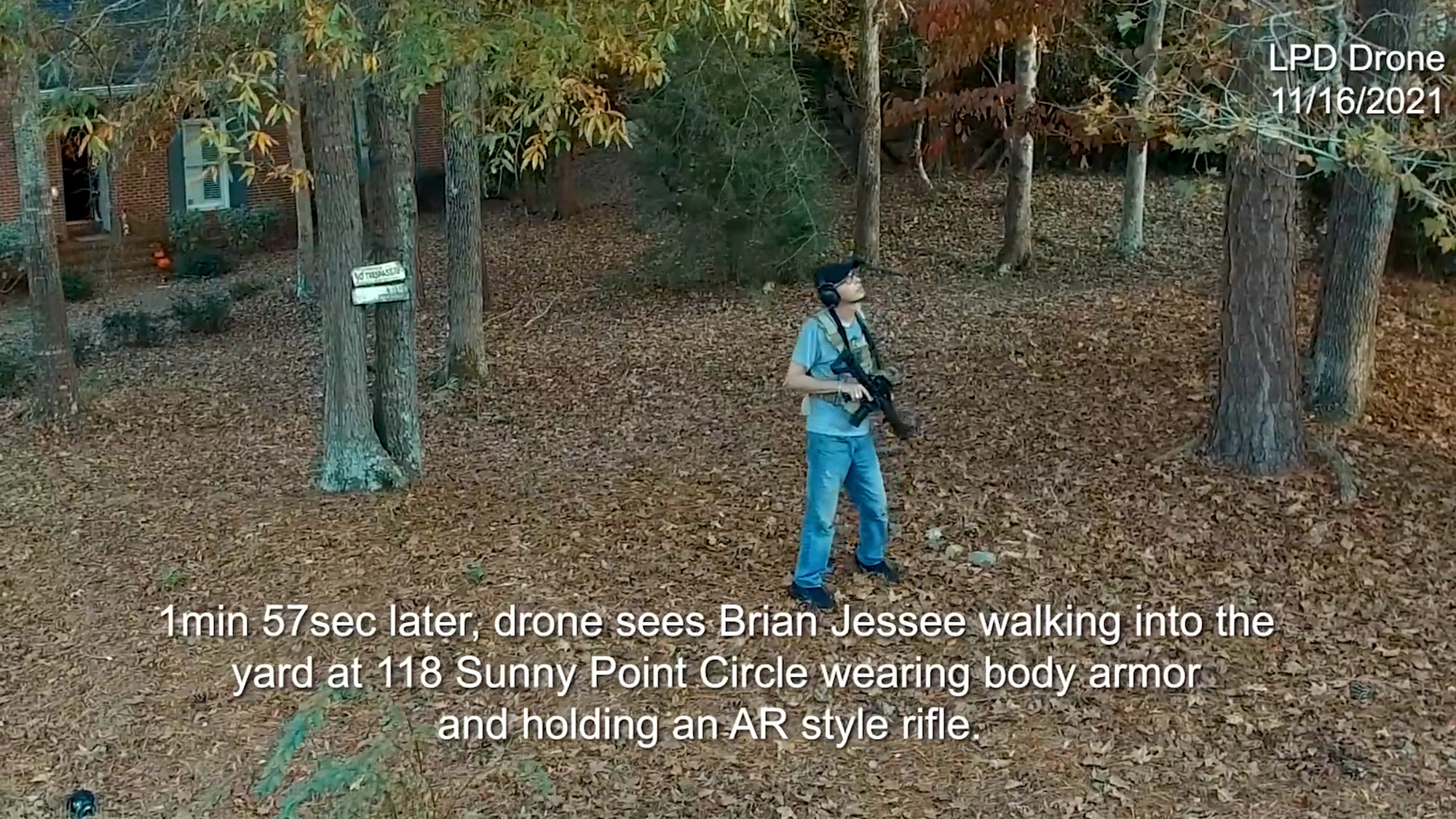 Brian Jessee is pictured with a firearm during his standoff with police last month in LaGrange, Georgia, (LaGrange Police/Zenger)

Police in Georgia have released video of a day-long standoff in November between officers and an armed suspect who was ultimately found dead in his burning home.

“The recordings document the original 911 calls for service for Jessee and the medical and police responses,” LaGrange Police said in an online post.

LaGrange Police spent most of the day on Nov. 15 negotiating with Jessee “in an attempt to coordinate medical treatment and to ensure the safety of his two young children, who were located inside the home with him.”

During the negotiations, police said, Jessee refused medical treatment and threatened to shoot police officers. Negotiations were suspended after the children were safely outside the residence and taken into police custody. Jessee continued to refuse medical assistance, police said.

On Nov. 16, police said they initiated commitment proceedings for a mental health evaluation for Jessee and a court order was issued.

Before the court order, however, police determined they had information that led to arrest warrants for six counts of felony terroristic threats, one count of cruelty to a child in the second degree, and one count of felony obstruction.

“Based on additional verified information that Jessee had multiple firearms and explosives inside the residence, an immediate operation plan was developed to evacuate the neighborhood,” police said.

While the evacuation was in process, police said, “Jessee was observed … with an AR-15. Jessee fired multiple rounds from that rifle, placing officers and residents in imminent danger.”

“Over the next 16 hours, officers made multiple attempts to communicate with Jessee in order to safely resolve the incident but were met with additional and continuous gunfire,” the police report says. “Jessee retreated into his residence where he remained barricaded. As officers attempted to breach areas of the residence with use of armored vehicles they were met with gunfire.

“Officers deployed CS gas (tear gas) and smoke in an effort to minimize the risk of danger to Jessee and the officers as they attempted to take Jessee into custody during the early morning hours of Nov. 17.”

“When provided with a tactical opportunity,” LaGrange Police said, “officers exchanged gunfire with Jessee. After that exchange no further shots were fired. At approximately 7:35 a.m., officers observed a small fire inside the garage of the residence. ”

The LaGrange Fire Department, which was on standby nearby, responded immediately to extinguish the fire, police said. “However, despite their best efforts, the house was unable to be saved. Jessee’s remains were recovered inside of the residence and were transported for autopsy to the Georgia Bureau of Investigations Medical Examiner’s Office.”

Police said the Georgia Bureau of Investigations is continuing its inquiry into the incident because it involved an exchange of gunfire between the suspect and the police.