A high-tech armor invented by the world's first superpower has been found in the tomb of a Chinese soldier, experts say.
By Joseph Golder December 13, 2021
Facebook
Twitter
Linkedin
Email 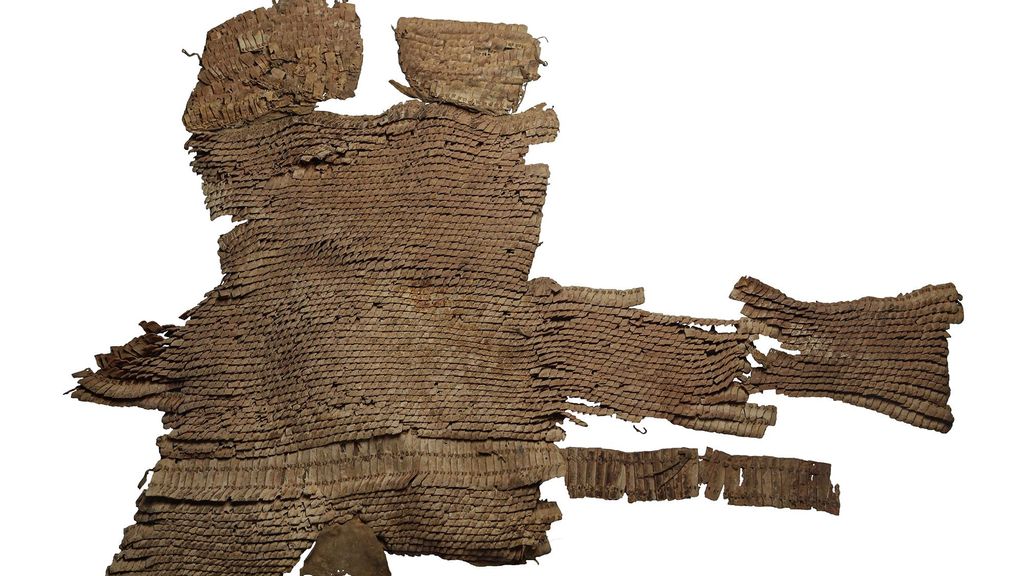 The ancient leather armor, which was high-tech at the time, found in China could be dated to between 786 and 543 B.C. (D.L. Xu, P. Wertmann, M. Yibulayinmu/Zenger)

Swiss experts have found evidence that no sooner had the world’s first superpower developed weapons in the form of an ultra-light, easy-to-wear armor than a version of it ended up in China.

Researchers at the University of Zurich made the claim after studying a 2,700-year-old piece of armor found in China that they said originated in the Middle East and proves that technology transfers took place in antiquity.

The team had been studying leather-scale armor, believed to have been made in the Neo-Assyrian Empire between the 8th and 6th centuries B.C. but retrieved from the tomb of a horseman in northwestern China.

The University of Zurich said in a statement that the design and construction details of the armor indicate that it was made about 2,700 years ago in the Neo-Assyrian Empire.

In existence from about 900 to 600 B.C., it was the largest empire in the world at the time and the first to use iron weapons.

The nearly complete leather scale armor was unearthed in 2013 in the tomb of a man who is thought to have been about 30 years old, near what is now the city of Turfan, in the Xinjiang Uygur Autonomous Region in northwestern China.

Researchers say the armor survived all this time thanks the extremely arid climate of the region. The international team, led by Patrick Wertmann from the Institute of Asian and Oriental Studies of the University of Zurich, published their findings in the journal Quaternary International.

They explained that scale armor was useful for protecting the user’s organs “like an extra layer of skin” but without restricting mobility.

This type of armor was typically made using small, “shield-shaped” plates arranged in horizontal rows that were then sewn onto a backing.

Armor was very expensive and precious because of the cost of the materials and the difficult manufacturing process, researchers said, noting that only the elites would have had the privilege of wearing any.

It was rare for armor to be buried with its owner but “the emergence of powerful states with large armies in the ancient world led to the development of less precious but nevertheless effective armors made of leather, bronze or iron for ordinary soldier,” the statement added.

The experts used radiocarbon dating to determine that it was created between 786 and 543 B.C. They said that it was originally made of about 5,444 individual scales and 140 larger scales. With the leather laces and lining of the armor included, it weighed between 8.8 and 11 pounds.

The armor appears to have been very easy to use as it could be put on without the help of another person and could fit people of different sizes.

“The armor was professionally produced in large numbers,” Wertmann said.

As chariots became increasingly used in warfare among the ancient powers of the Middle East, a “special armor for horsemen was developed.”

This kind of armor later became standard equipment for the Neo-Assyrian Empire’s military, whose presence extended from “parts of present-day Iraq to Iran, Syria, Turkey and Egypt.”

The university said that “while there is no direct parallel to the 2,700-year-old armor in the whole of Northwest China, there are some stylistic and functional similarities to a second contemporary armor of unknown origin held by the Metropolitan Museum of Art in New York (the Met).

“It is possible that the two armors were intended as outfits for distinct units of the same army, i.e. the Yanghai armor for cavalry and the armor in the Met for infantry,” researchers said.

It’s still a mystery whether the Yanghai armor belonged to a foreign soldier of the Assyrian forces who brought it back home or whether the armor was captured.

“Even though we can’t trace the exact path of the scale armor from Assyria to Northwest China, the find is one of the rare actual proofs of West-East technology transfer across the Eurasian continent during the early first millennium B.C.,” Wertmann said.