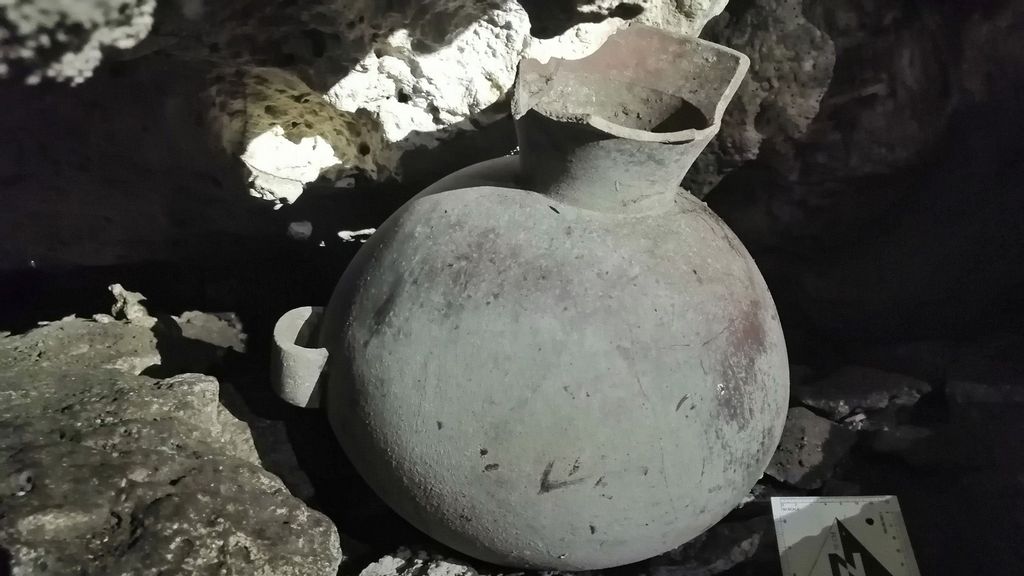 Pots found in a cave near Chemuyil, Mexico, dated to the Late Postclassic period of the Maya (1200–1550), were likely used to collect water that dripped from stalactites on the cave's ceiling. (Antonio Reyes-INAH-Quintana Roo/Zenger)

One of the pots was crushed after a tree root grew under it, but the others were still intact when the researchers were alerted to the find near the town of Chemuyil, in the eastern Mexican state of Quintana Roo in the Yucatan peninsula.

The caves represented “entrances to the underworld, to the home of the deities, as well as sites to obtain pristine water for sustenance” for the pre-Hispanic Mayans, the Mexican National Institute of Anthropology and History (Instituto Nacional de Antropología e Historia) said in a statement.

The institute said it had been alerted on Nov. 20 to the “presence of archeological assets within a natural cavity in the vicinity of the town of Chemuyil.”

Margarito Molina Rendón, the director of the INAH Quintana Roo Center, instructed the archeologist Antonio Reyes to locate and recover the pieces.

Jose Antonio Reyes Solis, the head of Cultural Property Protection of the INAH Quintana Roo Center, said the pieces needed to be moved and protected because the cave is near a road and people regularly go inside the cave and leave their rubbish behind.

“For this reason, we will not only continue working with the Urban Cenotes Project in the exploration and mapping of the cavern and its galleries but also in cleaning it,” he said.

The researcher explained that the three archeological objects were located in the “most intricate part of the cave” that was the most difficult to access.

The objects found include a rough ceramic vessel and a globular pot, which was in fragments because the root of one of the trees on the surface pressed it against the rocks, causing it to break.

Both vessels, Reyes pointed out, were placed over natural niches in the cave, “probably in places where water was draining from the stalactites.”

The third object, a tripod bowl with conical supports, was “very close to a body of water.”

“The bowl was placed face down and covered with stones, so it is clear that it is an offering, while the vessels were used for the ritual collection of the pristine water that came down from the stalactites,” Reyes said.

The pieces were dated to the Late Postclassic period of the Maya from about A.D. 1200 to 1550.

For INAH, the area is “part of an extensive region with numerous natural cavities that were often used for the purpose of rituals.”

The three objects have been transferred to the Mayan Museum in Cancun, where they were to undergo a manual cleaning phase in the collections cellar of the facility.