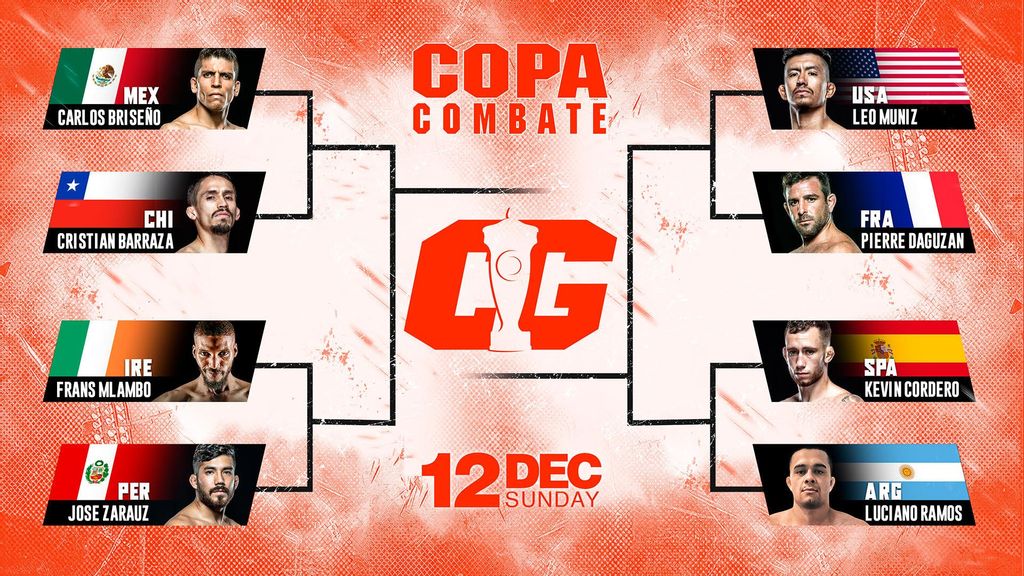 Former UFC champion Khabib Nurmagomedov is campaigning to get mixed martial arts into the Olympic Games when it comes to Los Angeles in 2028.

Whether that happens remains to be seen, but Combate Global is offering an early glimpse of what the Olympic competition might look like by staging a single-elimination tournament Sunday Dec. 12 featuring eight fighters from eight different countries.

Fighters from the 135-pound bantamweight division representing Mexico, Spain, Peru, Chile, Argentina, France, Ireland, and the United States won’t be competing for a gold medal. But the winner will earn $100,000 if he can win three fights in one night.

“When you come into a tournament like this when you’re literally representing your country, it adds an extra spin,” Combate Global CEO Campbell McLaren told Zenger. “They’re all proud of their homeland.”

Martial arts were among the first sports featured in the Olympic Games beginning with wrestling as part of the 708 B.C. Olympics. Six martial arts were held at the 2021 Olympics in Tokyo: boxing, judo, karate, Taekwondo, wrestling, and fencing. Modern MMA is a mixture of all of them except fencing but has yet to be seriously considered as an Olympic sport. Some consider it too violent. That could change as MMA’s popularity continues to grow globally.

“I think it’s going to be an Olympic sport for three categories of reasons,” McLaren said. “It’s a legitimate sport because it already contains several disciplines already in the Olympics and is deserving from a sporting fashion to be in there. It also takes skill, technique, training, endurance, cardio … all the things world-class sports do, and from a popularity perspective it’s a sport that has a global following. It also has a historical perspective, dating back to when the Olympics were created in Greece.”

The camaraderie and respect commonly displayed in MMA are also consistent with Olympic values. “That’s particularly important in these acrimonious times,” McLaren said. “We’ve forgotten how to fight and make up. We’ve forgotten how to fight fair and respect our opponent. Everything in the world is a fight to the death these days. We don’t hug it out at the end anymore. Combat sports actually sets a good example.”

Paramount Plus opens with a pre-show at 9:30 EST with competition to begin at 10 p.m. Univision begins it English and Spanish broadcasts along with Mexican network TUDN MX at 11 p.m.

Leo Muniz, who hails from the Bronx but now lives in Pennsylvania, will represent the United States. He was out of the sport for nearly six years due to injuries and a lack of opportunities but has fought twice, winning both bouts, since signing with Combate Global.

“I’m 2–0 with Combate and looking to make it 5–0,” Muniz told Zenger. “I have a huge opportunity to change my life, and I’m thankful for that.”

Training out of Gracie, New Jersey, Muniz frequently rotated fresh sparring partners to mimic the different styles he might face in the tournament. “You have to make adjustments on the fly,” he said. “It’s more mental. You have to forget the last fight and move on to the next one. I have to be ready and willing to fight anyone on any given night against however many opponents.”

To question Muniz’s courage would be a mistake. When he’s not fighting, he works in construction and rappels down for high-rise projects in New York City. “We go from the roof and deploy ropes and rappel down to solve the problem,” he said.

Muniz faces Pierre Daguzan of France in the opening round. The winner advances to face the victor between Kevin Cordero of Spain and Luciano Ramos of Argentina in the semifinals. On the other side of the bracket, Carlos Briseno of Mexico battles Cristian Barraza of Chile, and Frans Mlambo of Ireland faces Jose Zarauz of Peru in the quarterfinals.

Mlambo, the first fighter in history to represent Ireland in the Copa Combate tournament, would bet on himself. “It’s an unbelievable opportunity,” he said. “I feel so good. I came in underweight so I got to eat. I feel like I’ve got this in the bag, to be honest.”

With the uncertainty of whom he might face after the first round, Mlambo spent his training time in Dublin developing his own skills. “I’m trying to get as good as I can and let my opponent try to deal with me instead of me trying to deal with my opponent,” he said.

“My camp has been the best. I think I’ve trained like a professional for the very first time. I feel like I’m more prepared better than ever before. That’s where the confidence comes from. If anything goes wrong, it just wasn’t meant to be.”

Mlambo already has a gold medal, winning top honors at the International Mixed Martial Arts Federation world championships in 2015. Among the goals of the IMMAF is to gain recognition of the sport from the various national Olympic committees.

“The sport has grown by miles the last few years,” Mlambo said. “Countries you never heard of are coming out with some serious fighters. It’s booming globally and the skill level is amazing.”