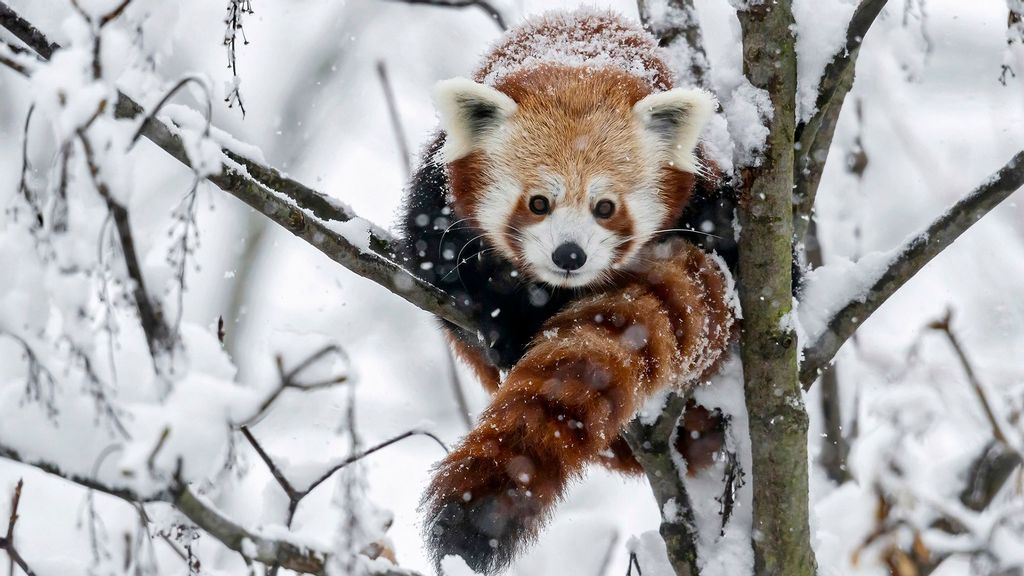 Schönbrunn Zoo, located in the heart of the Austrian capital, was blanketed by a thick layer of snow on Dec. 9. The zoo released images and video of the animals enjoying the weather.

Video footage shows a red panda licking some snow as it falls. Two red pandas, Mahalia and Manjul, demonstrate great climbing skills on the snow-covered branches. They run on elevated, horizontal logs inside their enclosure. Though covered in snow, they easily manage to stay balanced, thanks to their long, pointed claws.

“The higher the better is the motto,” said the zoo.

The footage also shows seals, found mainly in the Arctic Circle, enjoying their pool. Next, a white wolf dips its nose in the snow, with some snow sticking to it. Other wolves are seen nibbling on snow. A few zoo animals forage for the last few green leaves available on trees as the video ends.

The winter wonderland setting coincides with the zoo reopening after the latest pandemic lockdown in Austria. The country imposed a lockdown after its coronavirus numbers spiked.

The zoo said in a statement: “That and a romantic blanket of snow bring double the joy. Many animals are waiting for the visitors who are looking forward to the onset of winter.

“Polar bear Nora wallows in the white splendor, panda female Yang Yang eats her bamboo ration in the snow and the arctic wolves leave their tracks in the snow cover.”

Zoo director Stephan Hering-Hagenbeck said: “Many animals are naturally prepared for winter with thick fur or an insulating layer of fat under their skin. For us, it means wrap up warm. But it’s worth it, because when it has snowed, a visit to the zoo is a very special experience.”

The zoo said: “In addition to well-known snow lovers, such as the maned seals and reindeer, the red pandas are now completely in their element.”

“In colder temperatures, the red pandas are more active than usual,” said zoologist Eveline Dungl. “Up in the trees, they feel most comfortable because they can see everything. They also like to take a nap there.”

The species use their bushy tails for balance and to cover themselves in winter. The World Wildlife Fund reports a loss of nesting trees and bamboo in the Himalayas is creating a decline in the red panda population.