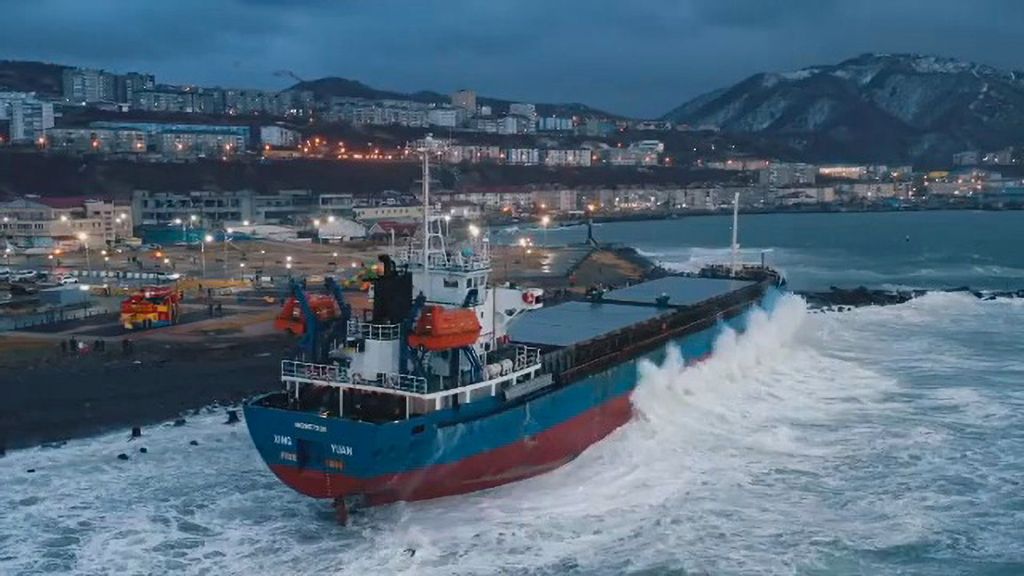 A local resident, Denis Ovsyannikov, used a drone to film this bird's-eye view of the Chinese cargo ship that ran aground on the coast of Kholmsk in Sakhalin, Russia, on Dec. 6. (Denis Ovsyannikov/Zenger)

A massive Chinese cargo ship has run aground in a port city in eastern Russia during a powerful storm, resulting in severe damage to its hull. No fuel or cargo leakage from the vessel has been reported so far.

The incident took place on Dec. 6, when the Chinese vessel — identified as the Xing Yuan — ran aground in the port town of Kholmsk, which is located on the southwestern coast of Sakhalin Island in far-eastern Russia.

Drone footage shared online by local resident Denis Ovsyannikov shows the stricken vessel, which was built in 1993, after it ran aground. The dry-cargo vessel was washed ashore by a strong westerly wind, he said.

Dry-cargo vessels are multipurpose freighters that can carry large amounts of bulk cargo, such as grain or ore. It is currently unclear what, if any, cargo the vessel was carrying and if its damaged hull poses a threat to the local marine ecosystem via any leakage.

“The crew wanted to wait out the bad weather away from the coast, but their main engine failed,” Ovsyannikov said in an interview.

The ship then drifted east before running aground parallel to the shore.

The footage shows huge waves smashing against the side of the stricken vessel, with the town visible in the background.

The Xing Yuan flies a Sierra Leone flag and is operated by the Yun Xing Shipping Co., of Shandong, China.

The vessel’s 12 crew members have since been successfully rescued, the Russian Ministry of Emergency Situations said in a statement. “Specialists of the Sakhalin Marine Rescue Service will inspect the vessel and develop a plan for further actions,” the ministry said.

“For preventive purposes, specialists are planning to install booms. No fuel spills are observed at this time.

“There is no threat to the life and health of the crew,” the ministry said. “Twenty-five people and eight pieces of equipment were involved in the rescue operation.”

The vessel’s crew are all citizens of the People’s Republic of China. It is unclear if any of them required medical treatment.

The hull of the vessel is said to have been seriously damaged, although inspections are underway and the authorities are continuing to investigate the mishap.