US Inflation Surges Again In November, Highest In 39 Years 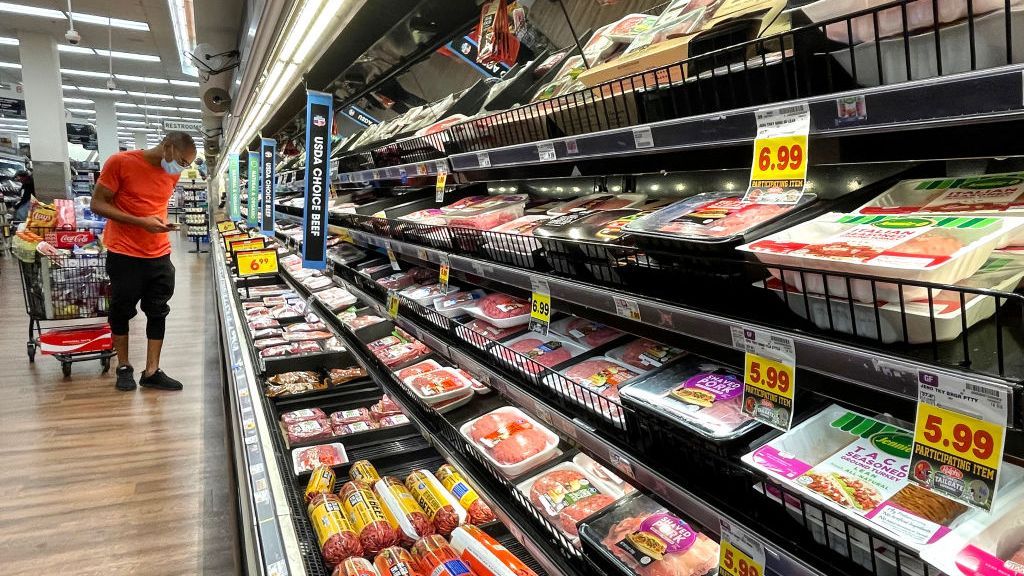 A person shops in the meat section of a grocery store on Nov. 11, 2021, in Los Angeles, California. The Dec. 10 Consumer Price Index showed that steaks jumped 25 percent in price in November, with bacon rising 21 percent and pork up 17 percent. (Mario Tama/Getty Images)

Inflation shot up again in November as prices increased at their highest rate since the 1980s, as the costs for housing grew at a record pace and prices for food and energy remain high.

The U.S. Bureau of Labor Statistics’ Consumer Price Index showed that the prices of goods and services in the U.S. economy rose 0.8 percent in November, marking another consecutive month inflation has grown.

The Consumer Price Index also jumped 0.9 percent in October and the Dec. 10 release of the price index showed that inflation has grown 6.8 percent over the year. The year-over-year rise in inflation is the largest since the July 1982 report.

As inflation continues to grow, it’s having a disproportionate impact on low-wage earners, several economists noted.

“The shelter component is the biggest part of CPI at 33 percent of the index and is being wildly understated with rents up 17.7 percent over the last year and home prices up nearly 20 percent,” Biello wrote on Twitter, adding that the year-over-year rise in rents and home prices is the largest ever recorded.

Harvard University Economics Professor Jason Furman agreed that inflation was rising rapidly, even taking into account price shifts associated with the pandemic. The November inflation report continues a trend of rising inflation, with prices rising more than 0.5 percent from March through July.

“Stripping out some volatile pandemic items from the core, the underlying trend is still quite high and broadly trending up,” Furman wrote on Twitter.

Furman wrote that he expected some prices to fall in upcoming months, especially gasoline, which was 6.1 percent higher in November, and used cars, which were 2.5 percent more expensive for the month. He put the latest inflation numbers against recent reports on wages, which have also been rising.

Real wages, which take inflation into account, were down 1 percent since February 2020, Furman wrote, which is 2.9 percent below pre-pandemic trends. However, the trends weren’t bad for all classes of workers.

“Much better for lower-wage workers. The bottom quarter of workers have seen wage gains outpace inflation but by less than before. The second quartile had been positive but has now turned negative,” Furman wrote following the Dec. 10 report. The highest 50 percent of wage earners all saw inflation overtake wage gains, he said.

In its November 2021 jobs report, released on Dec. 3, the Bureau of Labor Statistics reported that hourly wages rose an average of eight cents during the month, bringing the average to $31.03, a 4.6 percent jump from last year.

The Peterson Institute of International Economics said that wage growth was even stronger than pre-pandemic forecasts, outpacing trends by 1.4 percent.

Another thorny issue for the economy is rising energy prices.

Gasoline saw the highest gains of any goods or product in November, rising 58 percent. Rental cars are up 37 percent, used cars are up 31 percent, hotels prices were 26 percent higher and utilities were up 25 percent Food prices also shot up, with steaks jumping 25 percent in price in November, bacon rising 21 percent and pork up 17 percent.

Of the 6.8 percent total growth in inflation over the last year, 2 percent can be attributed to higher energy prices, namely for gasoline, according to the White House Council of Economic Advisers.

Diane Swonk, chief economist at Grant Thornton, said that prices at the pump are up nearly 60 percent from a year ago, and there are few options to attack inflation in this sector.

“These are the prices that worry consumers most but the Federal Reserve is limited in reducing,” Swonk wrote on Twitter.

The latest inflation numbers come days before the Federal Reserve Board of Governors is set to meet and consider how to end measures that helped shore up U.S. markets during the pandemic lockdowns, but are also likely contributing to U.S. inflation.

“The Fed’s goal is to see inflation come down to levels that are insignificant, which will require them to more forcefully reign in demand,” Swonk wrote on Twitter ahead of the Dec. 14-15 meeting of the Federal Reserve Board of Governors.