The books are thought to have been buried under the floor of the house to protect them. The owners were killed in the Holocaust. 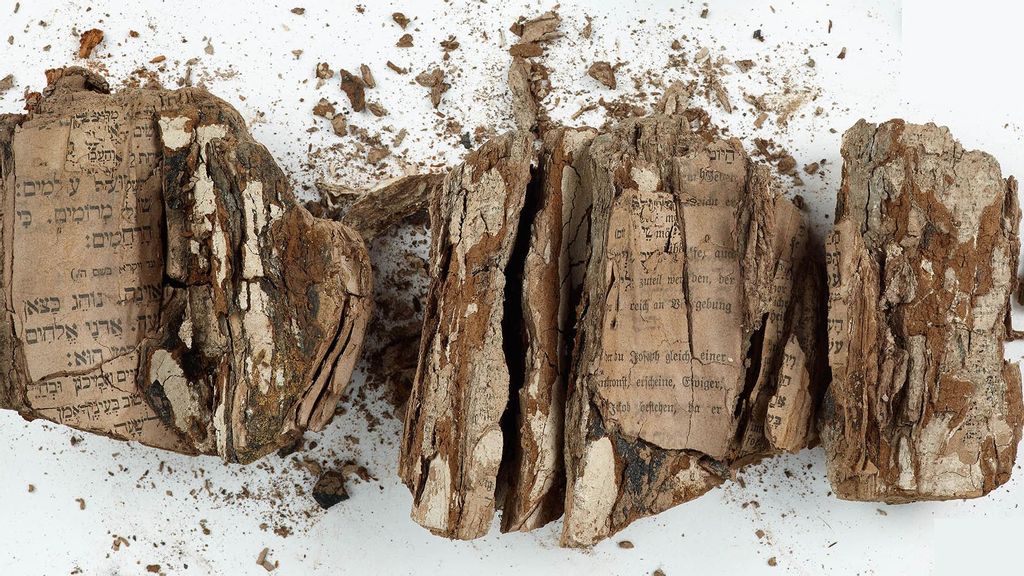 This fragment unearthed during road excavation in Germany shows passages from a Jewish prayer book. The book is thought to have been hidden under floor boards of a home whose owners were killed by the Nazis in the 1940s. (J. Vogel, LVR-LandesMuseum Bonn/Zenger)

Fragments of wood and printed paper with Hebrew characters that were discovered during road excavation in Zuelpich, Germany, last year have been identified as Jewish prayer books dating to the 1940s.

“It turned out that the fragments were originally in a wooden box. This was in a pit that had been dug directly into the ground and laid out with stones. When examining the fragments, it quickly became clear that there were different printed products with Hebrew characters and Gothic script,” according to the Office for Land Monument Preservation in the Rhineland.

“The experts called in from the LVR Institute for Regional Studies and Regional History were able to identify these as Jewish prayer books. They are likely from the 1920s, which is suggested by paper and stapling with iron staples.”

Prayer books have been found in many Jewish households since the 19th century, the agency said.

The prayer books contain the morning, afternoon and evening prayers, with the most important main prayers such as “Shma Israel” (Hear Israel) or “Schmone Esre” (Prayer for 18) as well as blessings and psalms.

The agency said that “Shma Israel” is visible in sections on the find. “On the first fragment you can read the following words in German: “My words in … characters above … on your head … when you … stand … when you … write them …”. It is a Biblical text (Deuteronomy 6:4–9). On weekdays the “Shma Israel” is recited in the morning and in the evening and on Shabbat for evening prayer. It is also known as the Jewish Creed. Above the German text, part of Psalm 29 can be seen in Hebrew letters and below part of Psalm 95.”

The historically significant find was discovered in a pit that had been dug directly into the ground, the agency said. The remnants were in very poor condition, and removing them was a “laborious undertaking, because the paper had deformed into a pulpy mass and the individual sheets were difficult or impossible to separate.”

During their investigation, the excavation company found that there had originally been a house at that location.

Research by Rita Reibold from the Zuelpich City Archives revealed that a Jewish cattle dealer, Moritz Sommer, had lived there with his family.

The house, including the rear stable and shed, was destroyed by a bomb in the final stages of World War II. Before that, the house had been used by the Nazis as a “Jewish house” from 1941 onwards.

Starting in May 1941, local Jews were expelled from their homes so that the buildings could be made available to other people, in what Hans-Gerd Dick, cultural advisor for the city of Zuelpich said was an attempt to “Aryanize” the homes.

The people who were forcibly evicted were moved to a few houses in the district that were still under Jewish ownership at that point. These were called “Jewish houses” by the Nazis due to massive overcrowding. The living conditions were poor.

From the surviving files it was determined that at least three families and one other person lived in the house with the Sommer family.

Moritz Sommer, his wife Lina and their son Kurt were deported to Minsk in Belarus on July 20, 1942, where they were killed four days later in the Maly Trostenets extermination camp. None of the other residents of the home survived either.

“It is likely that the prayer books were buried in a wooden box by the Sommer family or one of the families also housed there, under the floorboards of a shed behind the house, in order to hide them there and protect them from third party access,” the Rhineland agency said.

“In the post-war period, the area was used to expand the street, which meant that the text fragments ended up under the pavement.

Today, on the site there is a stone with a brass plate inscribed with the names of the victims of Nazi extermination “to remind of the Sommer family,” the Rhineland agency said.

The restored fragments are now in the collection of the LVR-LandesMuseum Bonn.