Bowled Over: What Happens To Goldfish When They’re Released Into The Wild

Fisheries officials show how these fish turn into bloated whoppers when they’re released into natural bodies of water. 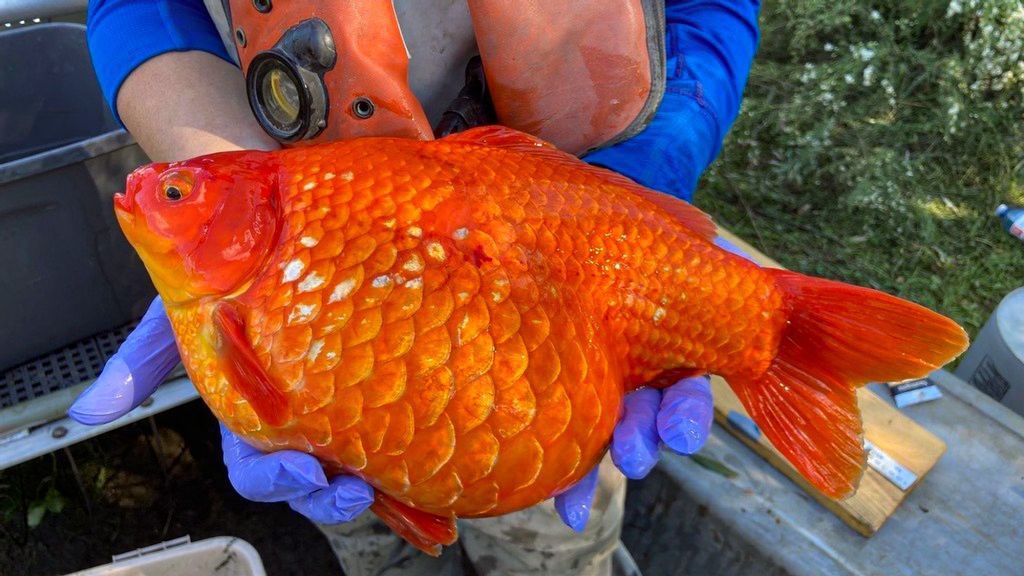 A bloated goldfish pulled from the waters off Hamilton Harbour, Canada. Invasive species such as goldfish that are released into natural waters can destroy aquatic habitats by tearing up aquatic plants for food and clouding the waters, which means less sunlight and less food for native species, authorities said. (Fisheries and Oceans Canada/Zenger)

A study of aquatic invasive species reveals that goldfish are being released into the waters off Hamilton Harbour in Ontario, Canada, growing to a huge size.

The goldfish were pulled out of the harbor on the western tip of Lake Ontario at the end of November.

“Ever wonder what happens to a pet goldfish when it ends up in our waterways? This one was pulled from Hamilton Harbour, where we’re studying this aquatic invasive species to learn how it’s affecting our waters,” Fisheries and Oceans Canada posted online with accompanying images of bloated goldfish.

“This is a big problem because in large numbers, goldfish can destroy aquatic habitats by tearing up aquatic plants for food and clouding the waters, which means less sunlight and less food for our native species. They can also thrive on toxic blue-green algae and may even aid in toxic algal growth.”

The agency said most goldfish “likely end up in our waters after being released into local entry points like stormwater ponds, which is why it’s so important to never release any pets into the wild.”

In its online post, the agency encouraged people to learn more about how to prevent the spread of aquatic invasive species.

“They can establish themselves in our waters and spread rapidly when they don’t face natural predators or competitors,” the agency states on its website. “In recent years, the introduction and spread of aquatic invasive species has been much more rapid because of globalization, including increased international shipping, online shopping and travel.

“Prevention is the most efficient and cost-effective method of dealing with aquatic invasive species.”

The agency posted general measures to prevent the introduction and spread of aquatic invasive species, including:

“Under the federal Aquatic Invasive Species Regulations, it is illegal to introduce an aquatic species into a body of water where it is not native, unless authorized under federal, provincial or territorial law,” the government said.

«Previous Post
VIDEO: Ice Got You: Hero Cops Strip Off To Save Dog From Frozen Lake»Next Post
Mammoth Discovery: Giant Tuskers And Wild Horses Roaming North America Died Out Only 5,000 Years Ago