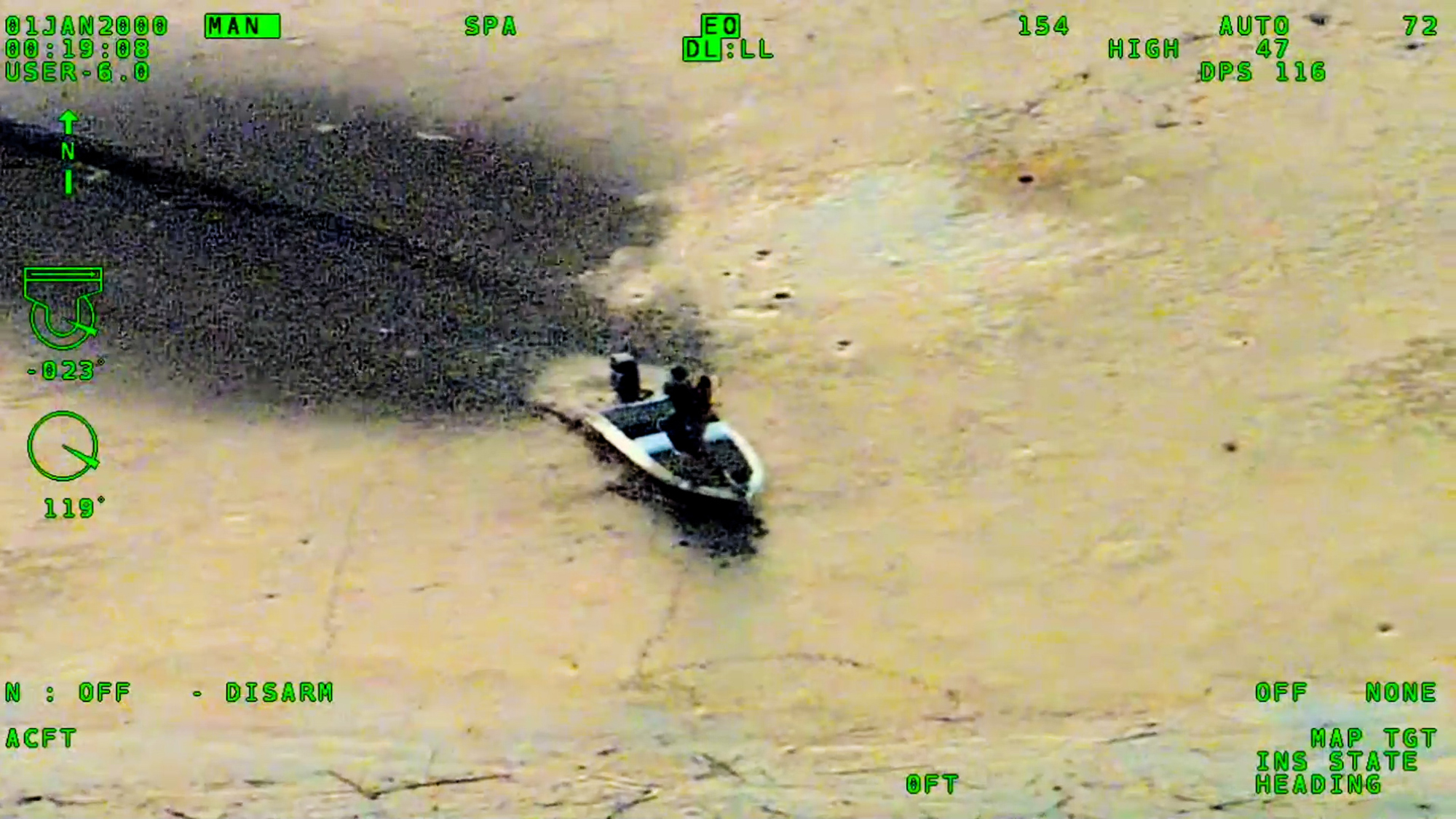 Two fishermen were stranded on a sinking boat on the river portion of Lake Amistad, just north of Del Rio, Texas, on Dec. 4. (Texas Department of Public Safety/Zenger)

A police helicopter in Texas rescued two stranded fishermen after their boat got stuck on a sandbank and began to sink.

The incident took place on a river area of the Lake Amistad reservoir, near the city of Del Rio, Texas, on Dec. 4. Amistad, whose name derives from the Spanish word meaning friendship, is best known for water-based recreation, camping, hiking and viewing prehistoric Native American rock art.

In the footage, shot from a helicopter, a second chopper approaches the vessel as two people in a motorboat wait to be saved before their boat is engulfed by the shoal.

A rescuer is seen dangling from a rope, having been lowered from the helicopter. He attaches himself to one of the fishermen before both men are hoisted to safety.

The helicopter moves from the stranded boat and lowers the rescuer and the fisherman to dry land. A Texas Parks and Wildlife Game Wardens truck waits nearby.

The footage then shows the rescuer, from the San Antonio Police Department’s EAGLE unit, being lowered down a second time to collect the remaining fisherman.

The rescuer attaches the man to his harness and both are then hoisted up to the helicopter, which takes the second man to safety. He is dropped off at the same location as the first man.

The footage was shared by the Texas Department of Public Safety. The agency released a statement that said: “After two local fishermen found themselves stranded, DPS and San Antonio Police sprung into action to rescue the two stranded boaters.

“DPS and our partner agencies practice and work alongside each other for these types of missions all the time, and although this particular team wasn’t familiar with the terrain in South Texas, their training prepared them to act quickly and help the fishermen in need.”

Sergeant Steve Tippett of the DPS Dive Recovery Team said: “We’re constantly doing cross-training with other agencies, which enable us to perform these types of missions.”

Multiple attempts to help the fishermen had been made by the Texas Parks and Wildlife Game Wardens, whose rescue helicopter was down for maintenance. Multiple types of boats were deployed, but were thwarted by the muddy terrain that had stranded the first boat. The police helicopter was deployed as evening approached.

It is unclear if either of the two fishermen, who have not been named, required any medical treatment. It is also unknown how or when the motorboat will be removed from the sandbank.

«Previous Post
VIDEO: Ice Got You: Hero Cops Strip Off To Save Dog From Frozen Lake»Next Post
VIDEO: Hull Of A Crash: Giant Chinese Cargo Ship Runs Aground In Massive Storm