VIDEO: Ice Got You: Hero Cops Strip Off To Save Dog From Frozen Lake

Trapped pooch saved by rescuers who had to smash the ice to reach it. 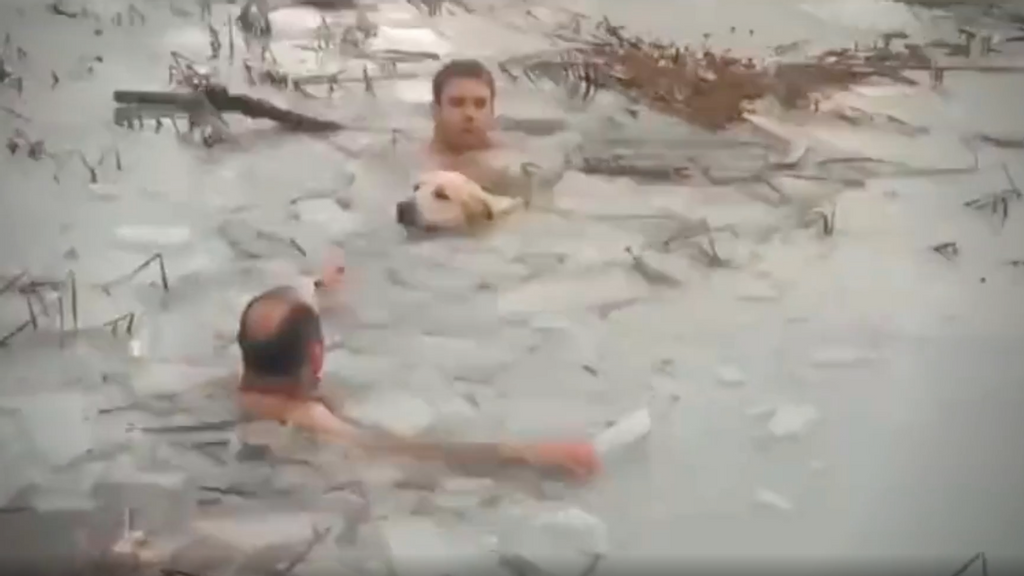 Spanish Civil Guard officers stripped down to their underwear and braved the icy waters of a reservoir to rescue a dog in a community in the country’s northeast.

Video posted by the police on Dec. 7 show the men, identified only as Corporal Jerome, 28, and Officer Abraham, 41, bare-chested and paddling several feet into the reservoir to clear a path for the dog, which appears to be a Labrador retriever.

“We received notice around 11 a.m. that a dog fell in a reservoir, the Spanish Civil Guard posted along with its video. “The Canfranc patrol went into the water to carry out the rescue.”

The rescue took place in Huesca, in the autonomous community of Aragon.

The officers’ access was made difficult by the large amount of snow in the area. They saw the dog, named Shiro, howling in the pond, apparently in distress.

Police spokesperson Sara Carnicer said: “It took a long time for them to arrive because of the amount of snow, and a woman was waiting there to tell them where to go.

“The dog was exhausted and could not get out.”

The dog had run away from his owner and fell through the ice and was trapped in the hole, Carnicer said. “He did not have enough strength to break the ice and was growing very tired.

“The officers decided to go in the water for him. They first asked for rope, but noticing that the animal was in a precarious situation, they waded into the water with a large branch. They used the branch to clear several feet of ice between them and the dog.

“There was 3 centimeters [1.2 inches] of ice in some places, but the rescue was carried out in less than five minutes,” Carnicer said.

“The officers took off their clothes to prevent them from being weighed down, allowing them to move quicker through the water,” she said. “The first one to go in was Corporal Jerome, followed by Officer Abraham.”

After the officers rescued the dog, they covered him up. He was fine, but slightly nervous, Carnicer said.

“They went back to the woman’s house to check the documentation, and the dog did not want to leave them.

“They were very grateful for the affection and did not think twice about saving the animal’s life,” she said.