A win in January could secure the “Irish Spartan” his chance at taking the crown later in 2022. 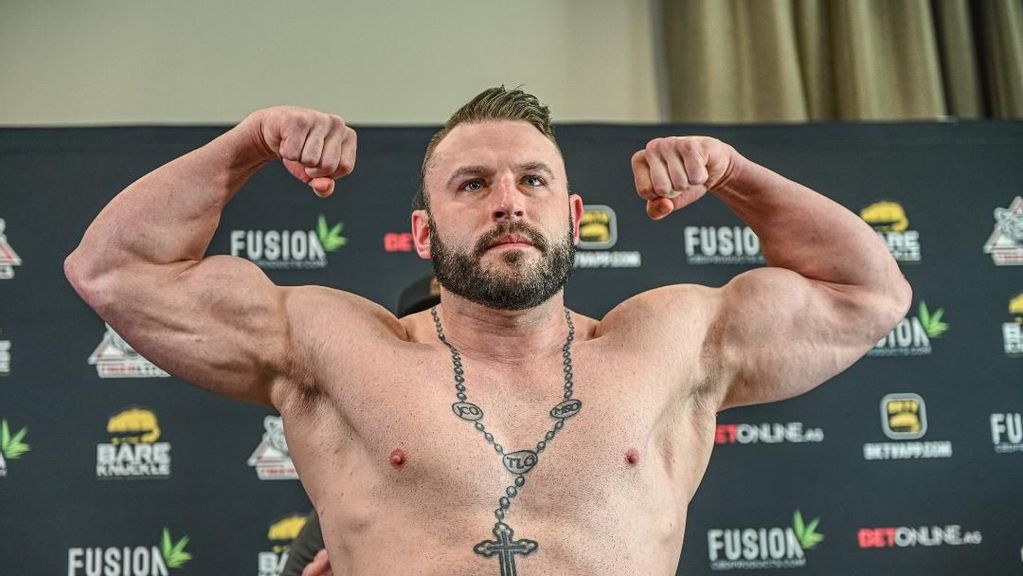 A veteran of mixed martial arts, Louisiana’s Scott O’Shaughnessy has taken his talents to the budding Bare Knuckle Fighting Championship stage. Unbeaten in his first two outings, O’Shaughnessy looks to be on the fast track to fighting for the coveted title in the cruiserweight division (185 pounds).

First things first: Ranked the No. 4 cruiserweight in the world, the “Irish Spartan” will face a fellow as-yet unnamed top five contender in Jackson, Mississippi, on Jan. 29. If successful in securing his third consecutive win, O’Shaughnessy is confident that he will receive the nod to face current champion Lorenzo Hunt, or whoever holds the title when his shot arrives.

BKFC is quickly becoming a go-to in the combat sports world. NBA legend and Hall of Famer Shaquille O’ Neal recently expressed interest in investing in the promotion while attending one of its events.

The “Irish Spartan” fills Zenger in on his transition from MMA to bare knuckle fighting, talks about his quest to become a world champion in the BKFC and more.

Zenger: Congratulations on your recent win over David Simpson and your 2-0 start in BKFC [Bare Knuckle Fighting Championship].

O’Shaughnessy: Thank you, brother. I appreciate that.

Zenger: What was the transition from MMA [Mixed Martial Arts] to Bare Knuckle like for you?

O’Shaughnessy: At first it was exciting just to have a fresh new sport. Obviously, there were concerns about how it was going to be on the hands, how would it be on getting cuts, and things like that. But at the end of the day, we’re just in a fight. That manner of fighting is similar to what I have been doing the past several years, anyway, just throwing punches. You gotta take kicks out of it, but it was in my comfort zone. Aside from the question mark of what it was going to do to my hands, it was a good fit just based on the rules.

Zenger: How have your hands held up through your first two fights?

O’Shaughnessy: The first one wasn’t bad. I jabbed Melvin [Guillard] pretty hard on the top of his head, so it busted up my left knuckle. But the punches that did the most damage, the right hand, it was perfectly fine. Barely had a bump on it. The fight with Melvin went pretty flawless in terms of that.

The second fight being a longer one. I thought it was broken, it wasn’t, but I punched a hole in his lip, and his tooth went through his lip and his tooth went through my knuckle. So, I had to get a good amount of stitches in my left hand just from his teeth. No breaks yet, and I got almost six rounds in it. No notable injuries; they just swell up real bad. It doesn’t feel good, but to be honest, they go numb pretty quick.

Zenger: You seemed to show more patience and were a lot more poised in your second fight. Was that just a matter of settling in, understanding what bare knuckle fighting was going to consist of and adjusting?

O’Shaughnessy: Yeah! I don’t want to be some guy that’s reckless, goes forward a bunch, especially with bare knuckle because in MMA there’s not a lot of room for error, and in bare knuckle, there’s hardly none. You get cut too easily; if you hit the wrong spot on your opponent’s head, your hands can get in real bad trouble. My mindset for the two fights were just different. I know Melvin is an absolute killer when he’s doing well. Melvin is the kind of guy that you really can’t afford to let him get any kind of momentum. If Melvin starts to get hot, he’s very dangerous. I wanted to put more pressure out of the gate to not get punked by him. You can’t let a guy like Melvin punk you in any way.

As for David Simpson … I didn’t really know a lot about him, and he ended up being a pretty damn good fighter. Compared to Melvin, who you could watch hours of tape on, I didn’t know a lot about Simpson. David was more of a methodical approach. We wanted to sit back and be a little more patient and try to capitalize on some of the openings that were there. I think it worked pretty well. We dropped him several times in the first few rounds. A couple of them weren’t even ruled knockdowns, which I don’t know how they weren’t, but it was more or less just sticking to the game plan of picking our shots correctly, not putting too much power into it because you do gotta save your hands. When the openings were there, use speed, slight angles if they’re there, and capitalize on his pressure.

Zenger: Obviously, you don’t have to grapple and things like that anymore, but have you deviated completely from your MMA training, or have you found a way to incorporate some of what you were doing in that sport and brought it into this sport?

O’Shaughnessy: Obviously, I have always had a coach, but it was really a team in there training, and we were doing everything as a team. We catered everything around the team in general. I brought in a coach, Kenny Stevens; everything is just catered to me. It’s kind of like we’re pushing towards a specific style. The training is a lot different than it used to be. It’s a lot of situational training. The rules of BKFC, fighting in the clinch and stuff like that, there are a lot of small things we work on daily just to get more comfortable with those rules. We changed my stance a lot. I was a heavy kicker, so my stance was more square just to have the access of both legs to kick with.

We’re changing a lot of stuff up. We’re still learning and getting better and comfortable with it. We are really hitting on angles a ton, head placement a ton, and just started to get to where we can steer people with our bodies and our punches. Our goal is not necessarily to just land shots, it’s to get ourselves in position to land a big shot. One punch is just a setup. We’re working a lot of setups, a lot of angles and a lot of movements. It’s not things that I did a ton of before. I didn’t work on a ton of head movement before. We did it, but it wasn’t the goal.

Zenger: You were an interested and vocal spectator for the Hector Lombard-Lorenzo Hunt fight a month ago. Hunt became the champion that night. Two-part question: When can we expect you back, and can you say who your opponent will be in your return?

O’Shaughnessy: You can expect me back Jan. 29 in Jackson, Mississippi. They don’t let us say names just yet. I’m ranked No. 4 in the world right now; every potential opponent is also in the top 5 in the world right now too. The plan is … from my perspective and even talking to BKFC, they seem to be in the same mindset. We’re going to win this fight in January, and the next one will be for the world title after that.

Zenger: What do you feel will eventually separate you from the pack that will allow you to become the world champion?

O’Shaughnessy: Everybody’s got certain things that they bring to the table. For me, I think it’s just mental toughness. Not only that, a lot of people try to be something they’re not. I know Lorenzo. I like Lorenzo, but Lorenzo is almost going full heel [villain]. I don’t know if he’s trying to hide something. I don’t know what he’s trying to do. He’s a good guy. I like Lorenzo, but I’m not going to do none of that crap.

I’m going to continue to be exactly who I am. I know who I am, and I’m going to fight with the exact same ferocity and vigor, and everything else that I bring to the table. I’m not going to be some spectacle, jumping over cages and flipping tables. You’re going to get a guy that’s going to be in your face for however long the fight lasts, and it’s going to be a dogfight.

Zenger: What did you learn the most about yourself in your first two outings?

O’Shaughnessy: I learned that I can take a punch (laughing). Melvin hit me with a damn good punch. I think in the fourth round of the Simpson fight he got me with a few good hard uppercuts that cut me open. Never once did I feel wobbled or shaken up. I think if you look at the contrast to that, anytime that I’ve ever touched somebody, even with a misplaced shot, a glance, those guys are touching the floor. I have eaten a lot of hard punches and never even got staggered yet. Not saying that can’t happen, but I have certainly learned that you’re going to have to hit me harder than you think you have to for that shot to affect me. That’s something that can’t be debated.

I’ve been hit pretty hard, and I’ve stayed in the pocket and returned fire. You never know how you’re going to do under the fire. Two-minute rounds are short, so the intensity is much higher. You don’t know how you’re going to face that. You can call it what you want, but a lot of guys look for ways out. They quit, and they try to find a way to get out of that fight without getting knocked out. I know for a fact that’s not the kind of guy I am. If I’m going to go out, I’m going to go out on my shield, and we’re going to be in a war the entire time.

Zenger: Continue to make the city proud. I look forward to seeing you back in there next year. Is there anything else you would like to add?

O’Shaughnessy: Being a new sport but being a veteran of the fight game, it’s about time that I’m putting myself on a platform to be recognized for the skills that I have. I think this is a sport that is built for someone like me. There’s a lot of people that it’s going to favor, but it definitely favors someone like me, my mindset and my attitude. Being 2-0, it’s a new sport, but I’m one of the few fighters in the division that has only fought in that one division who haven’t lost.

I’m going to be the world champion. I’m one fight away. We’re going to get a big win in January, and then I’m expecting sometime by the end of the first quarter, we will be fighting for a world title. Regardless, if that’s Lorenzo Hunt, Joe Riggs … whoever that is, we’re going to come for that championship. But we got one more hurdle to get over, and then I will be ready to fight to become the 185-pound bare knuckle champion of the world.

«Previous Post
Chango Opens Up About ‘King Of Swag’ Alpo Martinez Being Murdered In Harlem»Next Post
Floyd Mayweather Jr.: When It Comes To Boxing, Fighter’s Health Is More Important Than Anything