Home workshop was full of professionally made items with Nazi symbols intended for sale. 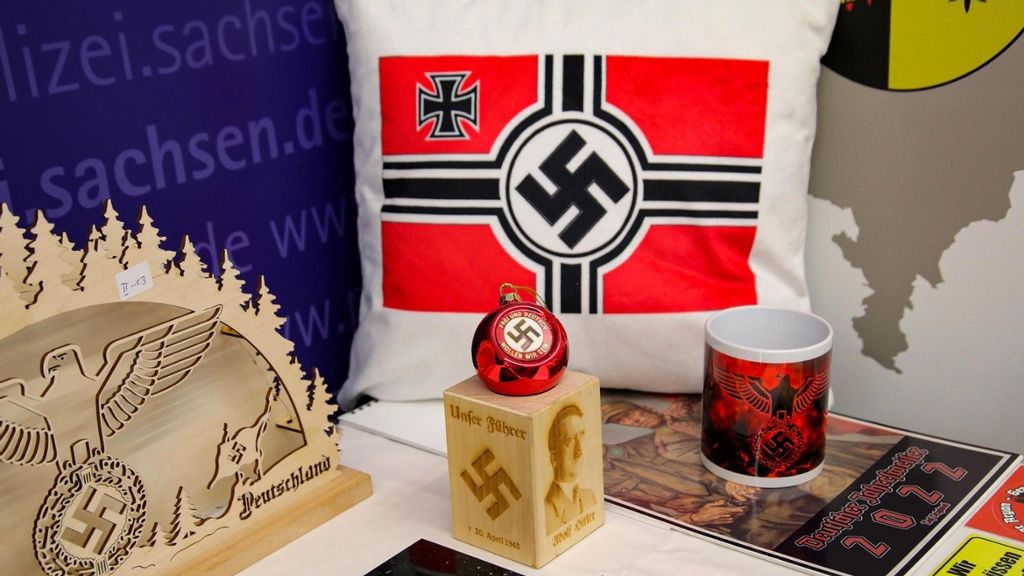 A Christmas tree ornament with a swastika was among the items with Nazi symbols and photos seized by Saxony police during a raid on a residence on Dec. 6. (Zwickau Police Headquarters/Zenger)

Swastika-branded Christmas tree ornaments and other items with Nazi symbols or photos of Adolph Hitler are among items seized by police in an eight-hour raid at a residential building in Zwickau, in the eastern German state of Saxony.

“With the support of colleagues from the State Criminal Police Office in Saxony, the Zwickau criminal police carried out an eight-hour search on [Dec. 6] in a residential building in the Zwickau district of Cainsdorf. As part of their investigations, state security officials had previously come to the conclusion that the 39-year-old German residing there could trade in Nazi devotional items.”

The suspect was not named.

Investigators found more than 100 different professionally manufactured objects in the living rooms and a workshop, police said, and the items had Nazi symbols or portraits of personalities from the time of National Socialism. “These included candle arches, incense smokers, cups, engraved glasses and slates, Christmas tree decorations, busts, T-shirts and calendars,” police said.

“The items found were apparently intended for sale.”

Among items were Christmas tree ornaments featuring a swastika.

The suspect is under investigation for allegedly disseminating Nazi propaganda, a crime under Germany’s strict laws targeting national socialist symbols.

The law regards swastikas and Schutzstaffel, or SS, runes as “symbols of anti-constitutional organization.” Putting such items on display unless for artistic purposes is illegal and can result in a jail term. The ban also extends to using Nazi gestures, such as the Nazi salute or Nazi-era expressions.

Police said they also found two blank vaccination passports, an allegedly forged vaccination card “and construction tools that had been advertised for a search for burglaries.”

In addition to the suspect’s cellphones and tablets, police said, they also seized a forbidden one-hand knife, brass knuckles and a cartridge.

Zwickau’s Police Chief, Lutz Rodig said it was clear that the suspect was selling the seized items far beyond the regional borders.

“As a result of investigations by the state security police, a supra-regional dealer with right-wing Nazi propaganda” has been prevented from trading, Rodig said.

“We are convinced that we have dealt a serious blow to the distribution structures of the right-wing scene,” the police chief said.

The suspect, a tenant of the apartment, “has to answer for the dissemination and use of propaganda material by unconstitutional organizations and violations of the weapons law,” police said.

The investigation is ongoing. It is unclear whether the suspect has appeared in court.