Dino-Soar: How The World’s Largest Flying Predator Got Into The Air

The massive pterosaur was as big as a giraffe and leaped high into the air before flapping its wings.
By Martin M Barillas December 9, 2021
Facebook
Twitter
Linkedin
Email 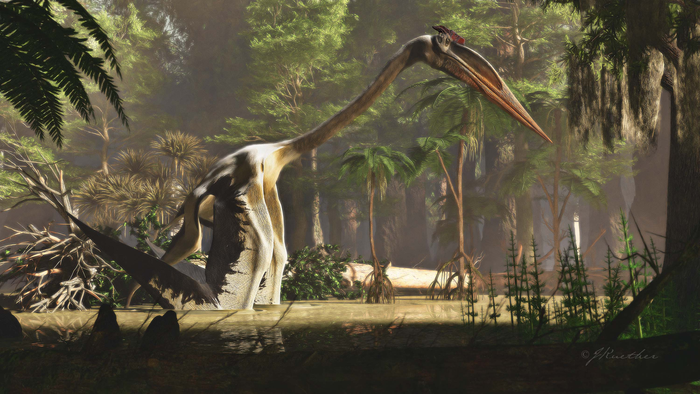 An artist's concept shows that 70 million years ago, Quetzalcoatlus northropi and related species of pterosaurs ranged in the ancient forests of Texas. Scientists have discovered how it moved on land and could leap into the air and take flight.  (James Kuether)

The secret of how giant pterosaurs were able to get aloft has resisted scientific explanation until now. Based on fossils found in West Texas in 1971, researchers determined the largest flying animal ever could leap into the air and take flight, though it was once thought to gather speed by running and going airborne like a modern albatross.

A monograph and five studies published by the Society of Vertebrate Paleontology  about Quetzalcoatlus northropi, which lived during the late Cretaceous Period, 100 million to 66 million years ago, were some of the first to directly examine its fossil bones.

“This is the first time that we have had any kind of comprehensive study,” Matthew Brown, co-editor of the report, said. “Even though Quetzalcoatlus has been known for 50 years, it has been poorly known.”

The new studies determined that the giant pterosaur probably jumped into the air at least eight feet and then flapped its wings to soar aloft. The studies offer the most complete picture of Quetzalcoatlus, which has long been depicted in movies and art. Scientists had wondered not only how it could fly, but what its diet was.

Quetzalcoatlus northropi had a wingspan of nearly 40 feet and resembled the modern stork or pelican. The studies not only shed light on how it was able to fly, but they also revealed two new pterosaur species — a smaller version of Quetzalcoatlus that had an 18- to 20-foot wingspan. The new species was dubbed Quetzalcoatlus lawsoni in honor of geologist Douglas Lawson, who discovered its larger cousin decades ago.

All the dozens of known Quetzalcoatlus northropi fossils are at the University of Texas, but there also are hundreds of fossils of the smaller species. Researchers were able to assemble a nearly complete skeleton of Quetzalcoatlus lawsoni and determine its flight and mobility. They then applied what they learned to the bigger cousin.

Quetzalcoatlus is named after the plumed serpent deity of the Aztecs, despite evidence that it was covered with fine hair rather than feathers. With a wingspan rivaling airplanes, Quetzalcoatlus had wings 50 percent bigger than the ancestor of modern condors, which in turn are descendants of dinosaurs.

Its legs were six feet long at the hip. Its neck was six feet long, and it had a skull crest four feet long. Like birds, Quetzalcoatlu was warm-blooded, soaring in the manner of modern condors.

Kevin Padian, a co-editor of the report, explained how the giants could fly and move on the ground. “Pterosaurs have huge breastbones, which is where the flight muscles attach, so there is no doubt that they were terrific flyers,” he said.

“Despite two centuries of reconstructing pterosaurs like bats, there is no evidence for this view: Bats are unique and very different from birds and pterosaurs,” Padian said. “The results are revolutionary for the study of pterosaurs — the first animals, after insects, ever to evolve powered flight.”

Paleontologists in the past theorized that the bipedal Quetzalcoatlus moved on the ground on elbows like a modern vampire bat.

“To avoid tripping, the animal first raised its left arm, then advanced its left leg in a full step, then it placed the hand on the ground,” Padian said. “This was repeated with the right leg and then the right paw.” This theory matches the tracks of walking pterosaurs that were found in Southern France in the 1990s, he said.

Its powerful rear legs gave Quetzalcoatlus a jump-start into the air. “If they could jump twice their hip height, to 8 feet, the wings would be able to clear the ground, and they could execute a deeper flight stroke,” Padian said. “This may be the best option for taking off, though it depends on sufficient power from the legs.”

70 million years ago, the two Quetzalcoatlus species lived in what is now Big Bend National Park in Texas. The land was covered in dense evergreen forests. Each of them revealed distinct lifestyles. While the larger lived like modern herons and conducted lonely hunts along rivers and streams, the smaller species assembled in flocks around lakes, either during mating season or seasonally. Evidence for the latter is that 30 Quetzalcoatlus lawsoni were found in one spot.

Rather than scavenging, Quetzalcoatlus probed lake and stream bottoms with its long, toothless jaws to seize clams, crabs and worms, just as modern egrets and herons do.

“This animal could raise its head and neck vertically, so as to swallow the small prey it seized with its jaws. It could lower the great head far below the horizontal, so if it were cruising above dry land, it might have been able to swoop down and pluck an unsuspecting animal,” Padian said. “Walking about on land, it could move its head and neck to an arc of 180 degrees, capable of full vision all around it.”

«Previous Post
Plut-No! Is Pluto Making A Comeback As A Planet?»Next Post
VIDEO: Ice Got You: Hero Cops Strip Off To Save Dog From Frozen Lake