Nekias Duncan takes a look at possible landing spots for Pacers All-Star Domantas Sabonis if they decide to move him. 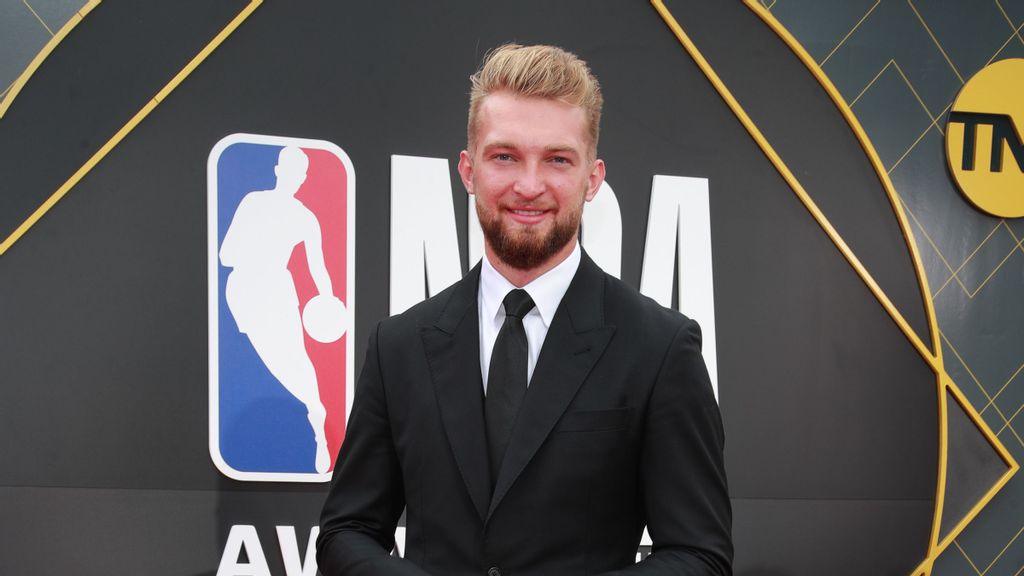 A suitor for Domantas Sabonis has to need what he provides — frontcourt passing and rim pressure via post-ups — while covering for what he doesn't.  (Rich Fury/Getty Images)

The Indiana Pacers might press the big red button.

Fresh off a plea from our own Evan Sidery, The Athletic’s Shams Charania and Bob Kravitz reported that the Pacers may be ready to shift into a rebuild.

“In need of a new direction amid a 10-16 start to the season, the Indiana Pacers are moving toward a substantial rebuild and are expected to open up trade conversations around some of their veteran stalwarts, sources tell The Athletic.”

The report lists Caris LeVert as a name that’s garnered interest from teams around the league. BasketballNews.com wrote about five teams that could make sense for the 27-year-old swingman on Tuesday.

Myles Turner also intrigues the masses; with his blend of shooting and elite rim protection, why wouldn’t he?

And then there’s Domantas Sabonis, the two-time All-Star bruiser who the Pacers are willing to take calls on.

There’s been plenty of smoke over the past few seasons about the Sabonis-Turner pairing, and how tenable it is long-term. If there was a split, Turner seemed to be the odd man out. But if Sabonis is actually available, the calculus on that changes.

WHAT SABONIS BRINGS TO THE TABLE

Dump it to him at the elbow, and he’ll give you options. He can flow into handoffs with guards, prying his partner open for shots or rolling into open space. He can take matters into his own hands, facing up or bumping and grinding his way into paint touches. Or, he can set up shop and pick out cutters in stationary sets.

Sabonis is most effective at the elbow, but because of his mix of ball skills and brute strength, he can be moved around the chessboard a bit.

He’s a willing participant in Delay sets — the cue would be a big handling the ball above the break — which allows him to pry guards open higher on the floor. Pull-up twos turn into three-point opportunities; and for Sabonis, he has even more space to roll into when operating that high.

And then, there’s the traditional low-post usage for him. He’s a bully in every sense of the word. Having tremendous footwork is a bonus (I avoided the pun, you’re welcome), but the physicality really stands out with him.

The scoring is the impressive (and important) part, but I’ve always marveled at how Sabonis nails the little things. He makes himself available, as simple as that sounds. High hands. Constant movement. He always jockeys for position, creating post looks out of nowhere. He’s not just a hub; he’s a security blanket of sorts.

What Sabonis is not, however, is a shooter. The “stretch big” experiment in OKC lasted one (1) season — his rookie campaign — and even that was a 32.1% clip on 2.0 attempts. He’s gotten back to slinging them on occasion over the past two seasons, but his numbers (30.9% on 2.6 attempts) underwhelm.

Sabonis is also a limited defender. A lack of length (6-foot-10.5 wingspan) and vertical pop prevent him from being a real rim deterrent. His lateral mobility isn’t at a level where you’d be comfortable switching him.

But this is where we have to be careful with Sabonis. He has clear limitations, but he isn’t useless. The Pacers have experimented with showing at the level of the screen, or outright blitzing them.

He’s not equipped to do that full-time, but he does have active hands and a solid enough understanding of positioning to pull the coverage off.

Funny enough, the Pacers’ ball-screen defense featuring Sabonis has fared better in more aggressive coverages. Per Second Spectrum, opponents are generating 1.07 points per possession when Sabonis is in drop (or “soft”) coverage; that number drops to 1.0 when Sabonis shows and recovers, or outright blitzes the screen.

Not knowing precisely what the Pacers are going after makes this a tough exercise. High level prospects and/or picks likely top the list, assuming they aren’t able to snag a young All-Star for an outright swap.

Beyond that, a suitor for Sabonis has to need what he provides — frontcourt passing and rim pressure via post-ups — while covering for what he doesn’t.

That narrows the list down to a few teams for me.

The Golden State Warriors top the list. They’ve been the league’s best team this season, though there’s room to shore up some things. Specifically on the offensive end, they currently lack a high-level secondary creator beyond Stephen Curry.

Jordan Poole can do it. Andrew Wiggins can do it. Saying either of them fill that role consistently is a bridge too far for me at the moment. The jury is out on Klay Thompson right now for rather obvious reasons.

Sabonis would certainly aid in the rim pressure department with his post-up and roll-man chops. The Warriors run enough post split action as-is; running it through Sabonis with the added element of post-up scoring if the cuts don’t work? Whew, buddy.

Defensively is where the questions come in, but Sabonis should be rather insulated. Assuming he’s flanked by Draymond Green, the Warriors could afford to have Sabonis hedge or blitz ball-screens while Green works his usual magic on the backline.

And if you’re looking for a trade package, the Warriors conveniently have three recent lottery-pick talents (James Wiseman, Jonathan Kuminga, Moses Moody) that nearly match Sabonis’ salary on the nose.

I’d guess the Pacers would want all three youngins; I’d also guess the Warriors would be fine with parting with Wiseman and one of Kuminga or Moody, and finding the salary to make it work elsewhere on the depth chart, and likely throw in some pick consideration to even the scales.

There’s a malleable framework if both teams are down to deal.

The Boston Celtics also intrigue me as a fit. Sabonis’ skillset would be a nice complement to the perimeter exploits of Jayson Tatum and Jaylen Brown, and the Celtics already run similar high-post actions through Al Horford and Robert Williams (when healthy). The scheme fit wouldn’t be troublesome.

Threading the needle on a package is where it gets tricky. The Pacers would rightfully ask for Brown first, aiming for the fabled “young All-Star for young All-Star” swap that was mentioned earlier. The Celtics would scoff at that.

They have enough mid-tier salaries to make a deal — I’d guess Marcus Smart and Williams (extension kicks in next season) — but the pick capital and rookie-scale prospects (do we feel good about Romeo Langford as the blue-chipper in an All-Star trade?) leave a bit to be desired.

The Dallas Mavericks are on the “good on-court fit, ‘meh’ assets to get it done” list, as are the Portland Trail Blazers (who may need to reset soon anyway) and Phoenix Suns (they aren’t giving up Ayton… at least they better not).

The Memphis Grizzlies intrigue me — imagine Ja Morant as a pick-and-roll partner, and Jaren Jackson Jr. sniping around the perimeter — though I’m not sure they’d be willing to give up what it may take to satisfy Indiana.

Who knows whether Sabonis is dealt or not, but at the very least, Indiana is listening intently to offers around the trio of Sabonis, Turner and LeVert.