Pharaohs believed that the tongues allowed them to bargain with Osiris, the Lord of the Underworld. 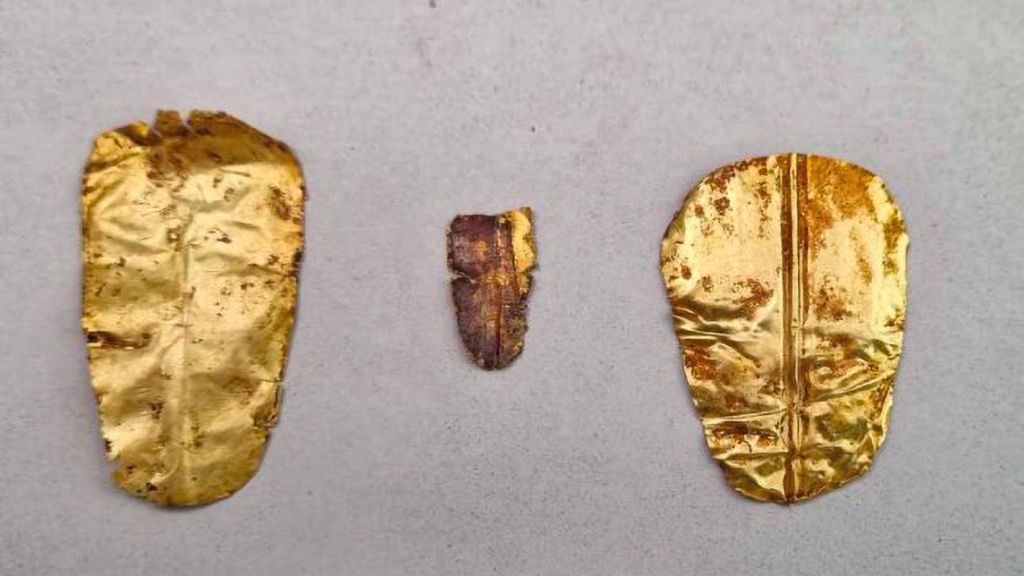 Three golden tongue-shaped amulets found in a human remains by the Spanish archeological mission in Egypt. (Egyptian Ministry of Tourism and Antiquities/Zenger).

Three ancient Egyptian golden tongues used by the dead to talk to Osiris, god of the underworld, on their way to the afterlife have been found in adjacent tombs believed to be 2,500 years old.

The three golden tongues include one belonging to a 3-year-old child and two from the mouths of adults, and date back to around 30 B.C., which corresponds with the beginning of the Roman period of Ancient Egypt.

Egypt’s Ministry of Tourism and Antiquities said the three gold tongues were found in tombs, one of which was sealed when it was discovered, meaning the contents were probably undisturbed over the years.

“This is very important, because it’s rare to find a tomb that is totally sealed,” Esther Pons Melado a co-director of the archeological team, said.

Jamal al-Samastawi, director general of Central Egypt Antiquities, said that the Spanish mission had been working in the Bahnasa archeological area for many decades, during which it had found many tombs.

The University of Barcelona established the archeological mission in 1992 with its latest find of a limestone sarcophagus containing a well-preserved male mummy, four jars, amulets, including some depicting a scarab, and 402 funerary figurines made of faience, an ancient type of glazed pottery.

A second tomb had been opened at some point in antiquity, and the remains were not in a good state, Melado Mustafa Waziri, secretary-general of the Supreme Council of Antiquities, said in a statement. A coffin made of limestone with a cover in the form of a woman was found, and the remains of an unknown person were also found next to the coffin, he said.

Hassan Amer, a professor at the Department of Greco-Roman Archeology at the Faculty of Archeology at Cairo University, who was also the director of excavations on the mission, said a limestone coffin in one of the tombs contained a human face in good condition.

On the walls of the tombs, scenes that talked about the afterlife were depicted and books that helped the deceased in that world, such as the Book of the Dead, had been left.

In February, archeologists at the ancient Egyptian site of Taposiris Magna found more than a dozen tombs, one of which contained a mummy with a similar golden tongue.

«Previous Post
Statue Of Mythical Winged Lion From Time Of Roman Empire Unearthed »Next Post
Dino-Soar: How The World’s Largest Flying Predator Got Into The Air