Fang-cy A Sss…it Down? 5-Foot-Long Boa Constrictor Was Hiding In New Couch 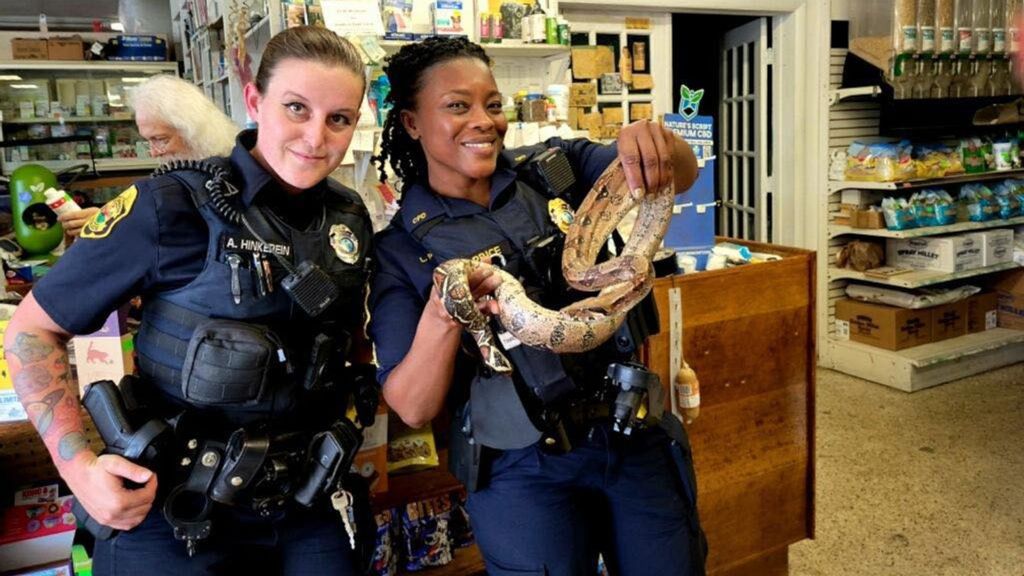 A 5-foot snake found slithering inside a sofa in a man's Florida home was take by police to a nearby pet store. (Clearwater Police Department/Zenger)

Two Florida police officers tackled one slippery customer after a man found an uninvited guest in his recently delivered sofa: a 5-foot-long boa constrictor hiding under the cushions.

The Clearwater Police Department reported on Dec. 4 that a man in a local condominium complex called them about a snake in his new piece of furniture. It was not clear how long the snake-bearing couch was in the man’s home, nor was it disclosed where the man had acquired it.

“Snakes alive!! Here’s a call you don’t see every day,” the Clearwater police wrote in a release on the unwanted reptile’s unexpected appearance. “A resident at Marilyn Pines calls this afternoon because he’s got a snake in his condo, and it’s hiding in his couch.

“Officers carry the couch outside and find the red tail boa deep inside the couch. They then carefully extracted it from its hiding place. It was easily 5 feet long and was taken to a local pet store after being plucked from the couch.

“The man just got the couch the other day, and he thinks the snake was hiding in it when it came to his house. Officers also carried the couch back in the residence for the man. It’s a jungle out there sometimes.”

In the wild, the boa constrictor is non-venomous and kills its prey by grabbing it with its teeth before constricting it until it can no longer breathe.

Once the prey is dead, the boa consumes it whole.

Boa constrictors are endemic to South America north of the 35th parallel but are often kept and bred in captivity further afield. What’s known as an “introduced population” — that is, one that was brought there — is known to thrive in southern Florida.

While the Clearwater man clearly wanted nothing to do with the snake authorities found in his couch, such boas are popular pets, as evidenced by where police took the snake after its capture and the variety of websites dedicated to such reptiles’ care and feeding.

“In general, [domesticated] boas are voracious eaters, taking rodents and birds of appropriate size,” reports one such site, Reptiles magazine. “Newborn specimens will take adult mice, while adults can take rats. This species grows quickly, reaching 6 feet in just three years … If handled from birth, most specimens remain calm and are not dangerous.”