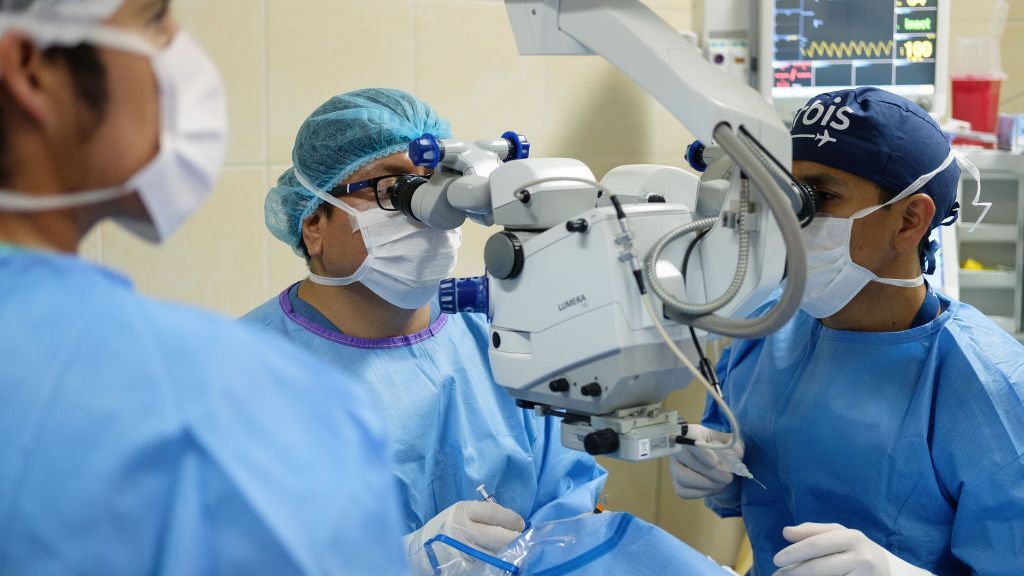 Surgeons work to remove a cataract from a 60-year-old at the Regional Institute for Ophthalmology in Trujillo, Peru. A new study has found that cataract surgery lowers the risk of developing dementia over the next ten years by nearly 30 percent. (Leon Neal/Getty Images)

Hope may be in sight for patients who have had cataract surgery as a large, long-term study has found they are at significantly lower risk of developing dementia.

More than 5,000 people over age 65 were observed as part of the Adult Changes in Thought (ACT) study from Kaiser Permanente Washington. University of Washington School of Medicine researchers looked at the data of more than 3,000 ACT study participants and found that subjects who had cataract surgery had a nearly 30 percent lower risk of developing dementia over the next 10 years.

“This kind of evidence is as good as it gets in epidemiology,” said Cecilia Lee, professor of ophthalmology at the University of Washington and lead author of the study, published in JAMA Internal Medicine. Lee added that no other medical procedure has been so strongly tied to reduced dementia risk in the elderly.

The study followed participants diagnosed with glaucoma or a cataract but without symptoms of dementia at the beginning of the study. In addition, these patients had not undergone cataract surgery before the study began.

Over the course of nearly 8 years, on average, the participants were evaluated every two years for cognition on the basis of the Cognitive Abilities Screening Instrument. Scores range from 0 to 100, and participants scoring less than 85 received further neurological tests.

Of the 3,038 subjects, 853 developed dementia, of which there were 709 cases of Alzheimer’s. Forty-five percent of all subjects, 1,382 individuals, had cataract surgery. The study showed that participants who had the surgery were about 30 percent less likely to present dementia for at least 10 years after surgery.

Although scientists have not determined why cataract surgery is associated with a lower risk of dementia, they believe that improved vision after surgery may provide the additional benefit. “These results are consistent with the notion that sensory input to the brain is important to brain health,” said co-author Eric Larson of Kaiser Permanente Washington Health Research Institute.

Lee said that people who have had the surgery receive more blue light in their eyes as cataracts tend to block this light. Surgery may reactivate cells in the eye. “Some special cells in the retina are associated with cognition and regulate sleep cycles, and these cells respond well to blue light,” she said.

Several factors were considered during the study. For example, cataract surgery could appear to have a protective effect due to a healthy patient bias, whereby those who had the procedure might have been healthier and at lower risk of dementia. But even when such factors were considered, researchers still found strong associations between the surgery and reduced risk for dementia.

Because the majority of participants were white, the researchers were not certain if the same effect would be found in other populations.

Previously, the team at University of Washington discovered other links between the eye, brain and dementia. For example, studies have shown a connection between age-related macular degeneration — the blurring of vision due to the shrinking of the part of the retina responsible for clear vision — and Alzheimer’s disease.

Understanding the links between the aging of the brain and eye may help scientists find ways to lower the risk of dementia in patients, the authors say.