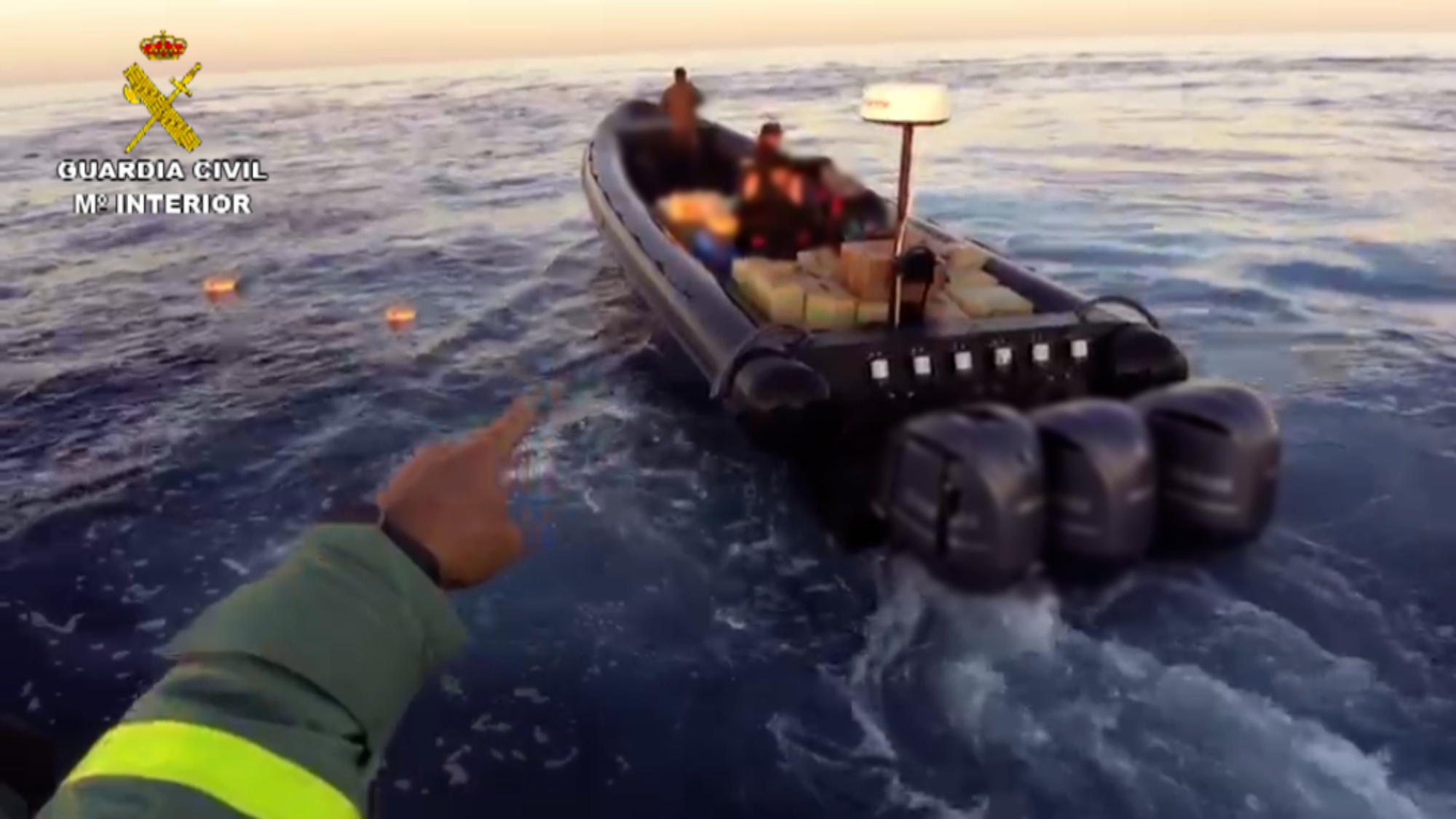 Maritime police arrested six people and seized 2.5 tons of hashish after a long chase off the coat of southwestern Spain on Dec. 5. (Spanish Civil Guard/Zenger)

Six people were arrested and 2.5 tons of hashish confiscated after maritime police in Spain chased down the suspects in a speedboat on Dec. 5.

Video shows agents of the Maritime Service of the Spanish Civil Guard chasing the suspected drug dealers, who are seen chucking their cargo in an area between Ayamonte and Isla Cristina, near Huelva on the southwestern coast of Spain.

“Given the possibility of a drug transshipment on the high seas, the agents decided to make a direct approach to the suspects,” police said.

After the people aboard the boat detected the police presence, the suspects boarded another vessel, an inflatable boat, to flee, leaving the first boat that was observed empty.

The crew on the inflatable boat, “made up of six people, fled ignoring the signals of the agents, carrying out constant evasion maneuvers, while they began to throw bales of hashish and fuel pouches into the sea,” police said.

“After a long chase, the agents managed to board the boat, proceeding to arrest its six occupants,” police said. The suspects were transferred ashore “to be brought to justice,” police said.

The video shows the pursuit of the suspects as police gesturing at them, indicating that they should cut their engines.

The police signals are ignored, and the suspects turn their boat in circles, “carrying out constant evasive maneuvers,” police said, allowing them to dump the cargo into the sea. Police said the suspects were also trying to dump fuel into the sea, presumably to make the boat go faster.

Eventually, the police boat manages to make the suspects stop throwing the cargo overboard and follow police instructions. The suspects turn off the boat’s engines, and the police officers board their vessel.

The investigation is ongoing. It is unclear whether the six suspected drug smugglers, who were not identified, have been charged. The authorities did not reveal an estimated value of the drugs seized.

The Spanish maritime police agents were supported by other vessels of the corps as well as by the Portuguese National Republican Guard.

Spain is known as an entry point into Europe for drugs smuggled from South America and further afield. It is not uncommon to see drug smugglers occasionally landing their vessels on beaches populated by tourists.

In May, Spanish law enforcement agencies said that in two separate operations they arrested 11 people and seized 12 tons of hashish that came in from Africa by boats, according to the Organized Crime and Corruption Reporting Project.

“The Guardia Civil (Civil Guard), National Police and the Tax Agency, “have seized more than seven tons of hashish and arrested three people,” the Guardia Civil said in a statement on May 2.