Trainer: “Gervonta came to the corner after the sixth round and said, ‘my hand is hurt.’ I said, ‘Fight through it.’” 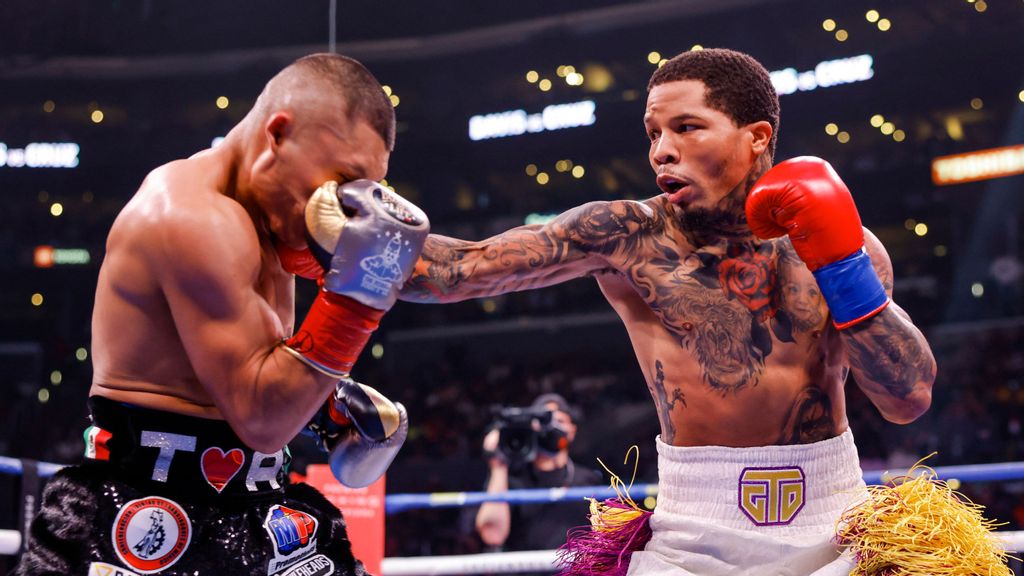 WBA 135-pound champion Gervonta Davis (right) refused cite a sixth-round left-hand injury following Sunday's unanimous decision victory over Isaac “Pitbull” Cruz. “Forget the hand. I don’t want to put it on my hand. I did what I did, and it’s about boxing. I knew what I was coming into this fight with.” (Esther Lin/Showtime)

Davis (26–0, 24 KOs) didn’t earn his 17th straight knockout, but he gutted out victory over the steel-chinned Cruz (22–2–1, 15 KOs) of Mexico City in the most difficult fight of his career to retain his crown by narrow unanimous decision (115–113 twice, 116–112). En route to victory, Davis had to overcome a left hand injury suffered during training that was aggravated in the fight’s sixth round before nabbing a victory in front of a sold-out of crowd of 15,850 at Staples Center in Los Angeles.

Davis displayed skills against Cruz that rank him among boxing’s biggest draws in his third straight pay-per-view event after being called “the best fighter at 130, 135 and 140” pounds by retired two-time welterweight champion Shawn Porter following their sparring session three weeks ago.

When the decision was announced, Davis ran to a neutral corner, stood on the ropes and thrust both fists skyward.

“Tank is a fighter. He showed that he can dish it out as well as take it. Tank did exactly what I asked him to do,” Floyd Mayweather, Davis’ Hall of Fame promoter, said during the post-fight press conference. “Turn him, turn him, box him, make him miss and make him pay, and that’s what he did. The guy was rough. If I would have fought this guy when I was younger and at my peak, I probably wouldn’t have knocked the guy out. He was tough.”

During a post-fight embrace with Cruz, Davis said, “hell no,” to the prospect of a rematch, later adding, “if we were to fight again, I’d knock him out,” and, “I’m fresh and could go another 12 rounds.”

“This is the first time that [a hand injury] has ever happened to me. It feels like not just one knuckle, but a couple of them. But it ain’t no big deal. I got the job done. [Cruz] is definitely a warrior. Even though he didn’t win, a star was born tonight,” Davis said. “At the beginning of the fight, we knew that my opponent would come out strong. But I felt that as I was going on and on with the fight that he would break down. But I hurt my hand, so I couldn’t get him outta there.”

It was after the sixth round that Davis, a 27-year-old Baltimore native, returned to his corner and complained to his career-long trainer, Calvin Ford, that he had injured his left hand.

“Gervonta came to the corner after the sixth round and said, ‘my hand is hurt.’ If you look at the tape, I said, ‘I don’t wanna hear that. Fight through it,’” said Ford, revealing the injury happened in training.

“Gervonta hurt his hand in camp and never complained about it. He just came out here and put on a helluva show, and that’s the bottom line. He fought this kid with one hand. Now give this young man his props.”

“Tank’s performance was beautiful tonight. He had a chance to show the world another facet of his boxing skill set,” Hunter said. “The average fighter facing somebody like Cruz with one hand and under that type of pressure, stress and duress would have broken down. Cruz took the role of the bull, and ‘Tank’ was the matador.”

Cruz took every shot imaginable from Davis, using brilliant head movement and relentless pressure along with brutal blows to the head and body.

But Davis refused to cite the injury as an excuse.

“Forget the hand. I don’t want to put it on my hand,” Davis said. “I did what I did, and it’s about boxing. I knew what I was coming into this fight with.”

“I’m happy to be in the position I’m in, but I don’t think I’m the face of boxing right now,” said Davis, calling his division counterparts “easy work.” “I feel that I’m the top guy at 135, but I don’t call anybody out. They can call me out, and when the time comes, it will come.”

“The fans are speaking to who they thought won the fight tonight. A star was born,” Cruz said. “In the fifth round, I noticed his hand wasn’t working correctly. My style as the ‘Pit Bull’ is to always pressure, and I maintained a rhythm from start to finish. If there is a chance at a rematch, then I want it.”

Davis-Cruz represented the third straight high-profile, 135-pound clash within nine days and among four in a two-week span, following up an upset split-decision victory on Nov. 27 by Kambosos (20–0, 10 KOs) over Teofimo Lopez (16–1, 12 KOs), whom “Ferocious” dethroned the IBF/WBA/WBO and WBC franchise champion.

Davis floored Gamboa once each in the second, eighth and final rounds to earn the WBA’s vacant lightweight crown, Santa Cruz was knocked out for the first time in his career by Davis’ ripping left uppercut, and Barrios was floored twice in the eighth and once in the 11th, falling to 26–1 (17 KOs) following “Tank’s” fight-ending left hook to the solar plexus.

A capacity crowd of 16,432 packed State Farm Arena in Atlanta to see Davis dispatch Barrios, and, in July 2019, 14,686 witnessed “Tank’s” second-round TKO of Ricardo Nunez at Royal Farms Arena in his native Baltimore.

“We were in Atlanta a few months ago, and we had more fans at our fight than the [NBA’s Atlanta] Hawks had at their playoff game,” said Leonard Ellerbe, CEO of Mayweather Promotions during an interview following Saturday’s weigh-in.

“The numbers don’t lie. We’ve gone to the UK, we’ve gone to Baltimore, we’ve gone to New York. Everywhere Tank goes, this young man sells out. You can feel the energy [during his ring walk].”

Davis entered the ring behind rapper Lil Durk wearing the late Kobe Bryant’s jersey numbers “8” and “24” on each side of his trunks.

“Davis is the cash cow of the division, and he came out west tonight and had another sellout. Everywhere he goes, Tank always has a hot artist with him, and the place is just rocking,” Ellerbe said.

“You hear some promoters complaining about nobody’s selling tickets, but we don’t have that problem with this young man, because he’s the most exciting fighter in the entire sport; he gives the fans exactly what they want to see. He’s that guy for this new, young generation. They don’t care who he fights, so it all begins and ends with ‘Tank.’”