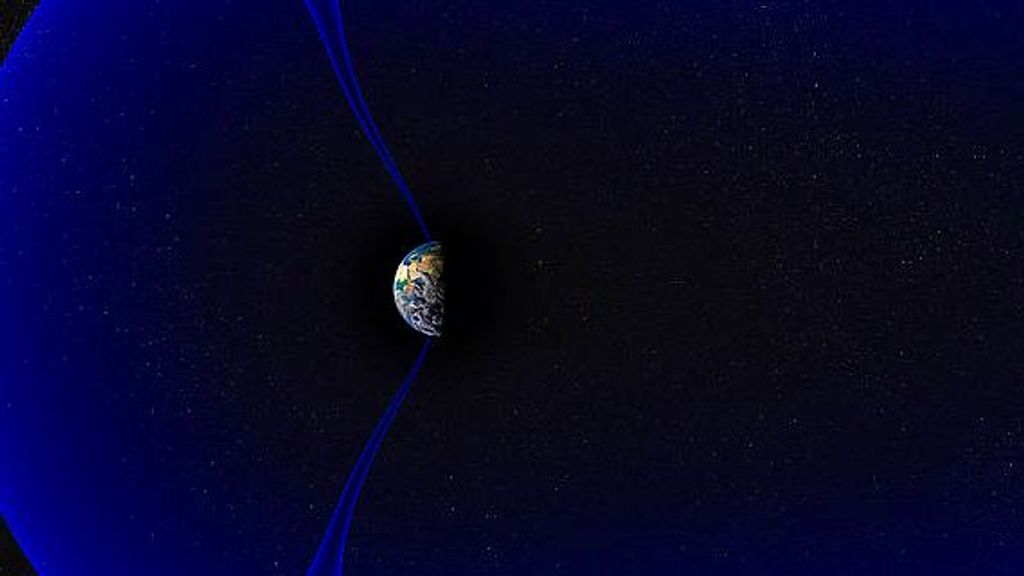 An artist's concept depicts Earth's protective magnetosphere to scale. North of Norway over the Norwegian and Greenland seas, a magnetic bubble known as the cusp surrounds Earth and dips inward. Some air in the cusp is unusually dense, and the CREX-2 mission aims to understand why. (NASA)

Over both of Earth’s polar regions at noon local time there opens a region called the polar cusp where very strange things happen. To help scientists understand why, NASA’s Cusp Region Experiment-2, or CREX-2, payload was launched on Dec. 1 from the Andøya Space Center in Norway.

The polar cusp is a gap shaped like a funnel that appears in Earth’s magnetosphere — the magnetic field — that protects humanity from the stream of atomic particles coming from the sun known as solar wind. When the gap is open, the particles can directly access the atmosphere.

GPS and radio signals behave abnormally in the polar cusp and spacecraft inexplicably slow down when they pass through it. “At around 250 miles above Earth, spacecraft feel more drag, sort of like they’ve hit a speed bump,” said Mark Conde, a physicist at the University of Alaska Fairbanks and the principal investigator for the CREX-2 sounding rocket mission.

Earth’s atmosphere is consistent horizontally around the world and roughly the same density. But air is 1.5 times denser in the cusp than elsewhere in the atmosphere, and no one knows why.

“You can’t just increase the mass in a region by a factor of 1.5 and do nothing else, or the sky will fall,” Conde said.

The mission he leads seeks to find out what are the invisible supports for that extra mass of air. Conde said it will “try and sort out which one is doing the work.”

After nearly two years of delay, CREX-2 set off to study how electrical and magnetic phenomena affect the interaction of solar wind and the tenuous upper atmosphere. CREX-2 will also measure high-altitude winds.

CREX-2 will release 20 rocket-propelled soda-can-sized canisters that go in different directions while releasing vapor tracers at various altitudes. Like Roman candles on the Fourth of July, the particles glow when exposed to oxygen. By catching light from the sun, the particles will create glowing clouds of color caught by the winds, revealing where the winds go.

To observe the high-altitude light show, the dark winter months in the Arctic are ideal. Students across the Nordic countries, including Iceland and the Svalbard Islands of the Arctic Ocean, will document the tracers through most of their journey from various vantage points.

Among the reasons proposed for the density of the polar cusp is that electrodynamics in the ionosphere — the upper atmosphere ionized by solar wind — support denser air indirectly, or generate heat that causes vertical winds keeping the air aloft. Also, the air in the vertical column of the cusp may be denser than the surrounding air. Stacked on heavier air, the dense air at high altitude would float, but it should also create horizontal or vortex-like winds. These are the phenomena CREX-2 is designed to investigate.

“We get about an hour or two each day when conditions are suitable to do the experiment,” Conde said.

Two of the observation stations, at least, need a clear view of the tracers to gather enough data. In 2019, the launch window was open for 17 days, not one of which was suitable for CREX-2 to launch.

«Previous Post
VIDEO: Lava-cue: Birds Risk A Grilling As They Fly Over Erupting Volcano»Next Post
Not So Balloonatic: How Fleets Of High-Tech Balloons Could Scrub CO2 From The Air