VIDEO: Lava-cue: Birds Risk A Grilling As They Fly Over Erupting Volcano

The white koa'e kea seabird makes its home in the walls of the crater, still bubbling over with molten magma.
By Lisa Maria December 5, 2021
Facebook
Twitter
Linkedin
Email 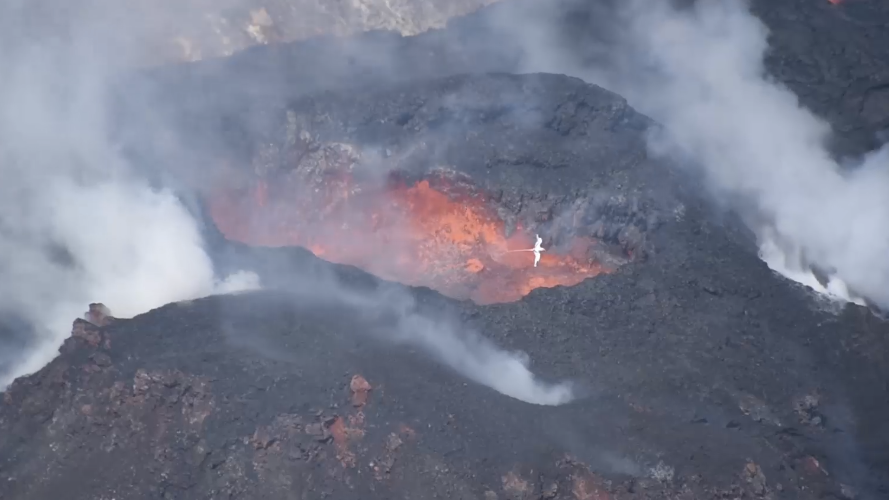 A koa'e kea, or white-tailed tropicbird, was captured on video flying above the Kīlauea volcano in Hawaii. (U.S. Geological Survey)

Dramatic images show lava continuing to spew out of a volcano in Hawaii as a tropical bird circles the smoking crater.

As of Dec. 2, all lava activity is confined within Halemaʻumaʻu crater in Hawai‘i Volcanoes National Park.

The video was taken at the Halemaʻumaʻu crater, found at the summit of the K&imacr;lauea volcano on the island of Hawaiʻi, which has been erupting since Sept. 29.

The footage shows nearly continuous spatter bursts through the pond and a roiling and sloshing pond surface. At about 43 seconds into the video, a white-trailed koa‘e kea, a local bird sporting a black eye-mask and orange bill, majestically flies through the frame.

The white seabird is related to boobies and frigate birds and makes its home in the walls of Halema‘uma‘u crater. It is frequently seen swooping around it.

The koa’e kea, also known as a white-tailed tropicbird, often soars near the Ka’u Desert’s pit craters or above the K&imacr;lauea caldera.

In fact, lava has been spewing out of a vent that opened up inside an older lava lake for months.

After the September explosion, the species was seen circling the towering ash clouds. Often called “crater birds,” they are about 30 inches long, including their white tail.

Koa‘e keas breed in colonies and pairs remain together for years. Both parents incubate the egg for a month, often laid in a rocky recess between March and October, and together feed the single chick. In Hawai‘i, the tropical bird’s population is estimated at 1,800 breeding pairs. The koa’e kea captures its prey — crabs, fish and snails — by plunge diving from 50 to 65 feet above the water.

Seismic activity and volcanic gas emission rates has remained elevated at their home base. This new eruption at K&imacr;lauea’s summit means high levels of volcanic gas, a hazard that can have far-reaching effects down-wind.

The U.S. Geological Survey reported the eruption was being monitored from “within the closed area of Hawaii‘i Volcanoes National Park” by Hawaiian Volcano Observatory field crews, which are equipped with specialized safety gear.

The scientific agency hopes the data collected by scientists will allow them to assess hazards and understand how the ongoing eruption at K&imacr;lauea evolves.

The K&imacr;lauea volcano, believed to be between 210,000 and 280,000 years old, emerged from the sea about 100,000 years ago. K&imacr;lauea is located on Hawai’i, the official name of the largest island in the archipelago, also called the Big Island, not to be confused with Hawaii the state.