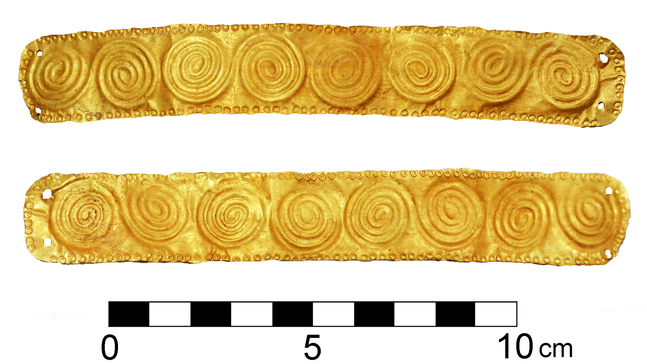 One of the scores of skeletons discovered at an archeological dig in Cyprus belonged to a 5-year-old child who was buried with gold jewelry, including this tiara or diadem. (Peter Fischer, Teresa Bürge/University of Gothenburg)

Archeologists made a spectacular find of Bronze Age relics in Cyprus, including gold jewelry and gems, in a tomb dating to about 1350 B.C.

Two underground burial chambers were found at the Hala Sultan Tekke complex in 2018 by the Söderberg Expedition from Sweden’s University of Gothenburg. After several seasons of excavation, 155 skeletons were uncovered, as well as 500 artifacts buried in successive layers. Burials at the site near the modern city of Larnaka had continued, one on top of the other, for generations.

“The finds indicate that these are family tombs for the ruling elite in the city. For example, we found the skeleton of a 5-year-old with a gold necklace, gold earrings and a gold tiara. This was probably a child of a powerful and wealthy family,” said archeologist Peter Fischer, who led the excavations.

Because the site is near the island’s coast and has a high salt content, researchers had to treat the fragile human remains gingerly. Planned DNA analysis should reveal the relationships between the individuals and whether they had ancestry from beyond Cyprus. Fischer said immigrant ancestry is likely because of the island’s extensive trade network.

“We also found a ceramic bull. The body of this hollow bull has two openings: one on the back to fill it with a liquid, likely wine, and one at the nose to drink from,” he said. “Apparently, they had feasts in the chamber to honor their dead.”

There were also silver, bronze, ivory, gems and ceramic vessels from elsewhere in the ancient Mediterranean world. The site corresponds to the Mycenaean period of Ancient Greece, which featured the war depicted in Homer’s “Iliad.”

“The way that the ceramics changed in appearance and material over time allows us to date them,” Fischer said, “and study the connections these people had with the surrounding world. What fascinates me most is the wide-ranging network of contacts they had 3,400 years ago.”

One intriguing artifact is an inlaid gold lotus from Egypt of a style favored by Queen Nefertiti. She was the wife of Pharaoh Akhenaten of the 18th Dynasty. He established a monotheistic religion and ruled during one of Ancient Egypt’s most prosperous eras.

Another is a blood-red cylinder-shaped seal made from the mineral hematite, with a cuneiform inscription from landlocked Iraq, or ancient Mesopotamia, where the Babylonian civilization once flourished.

Archeologists were able to decipher the cuneiform script. “The text consists of three lines and mentions three names. One is Amurru, a god worshiped in Mesopotamia. The other two are historical kings, father and son, who we recently succeeded in tracking down in other texts on clay tablets from the same period, i.e., the 18th century B.C.,” Fischer said. He added that the team is seeking to determine how the seal wound up on the island of Cyprus, more than 600 miles away from where it was made.

The researchers also found carnelian gemstone from India, amber from the Baltic Sea region, and lapis lazuli from Afghanistan. In addition to gold artifacts, there were Egyptian amulets in the form of scarab beetles inscribed with hieroglyphs, as well as evidence of fish imported from the Nile River. This provided evidence that Cyprus had extensive trade ties with Ancient Egypt.

Archeologists determined that most of the artifacts date from the time of Akhenaten and Nefertiti, approximately 1350 B.C. Regarding the Egyptian gold pendant, Fischer said, “Nefertiti wore similar jewelry.”

«Previous Post
Potted History: Conquered Mexicans Buried Pot Of Human Ashes To Mourn End Of Their Civilization»Next Post
Not So Balloonatic: How Fleets Of High-Tech Balloons Could Scrub CO2 From The Air