VIDEO: That’s Trucky! Cop And Stopped Driver Jump For Lives As Pickup Piles Into Them

Officer and driver fixing a flat had to dodge a truck that barreled onto the scene. 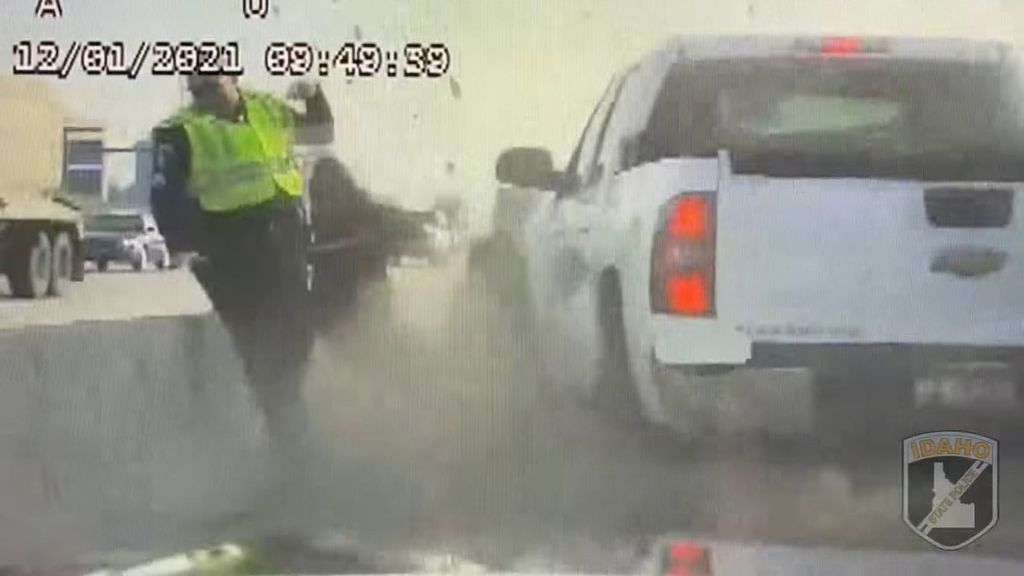 A motorist’s decision to fix a flat tire on his car by parking it along an Idaho highway’s median barrier nearly turned to tragedy, when a pickup truck smashed into the back the disabled vehicle, narrowly avoiding a policeman who had stopped to assist and the man working on the tire.

The harrowing near-miss took place Wednesday morning, and footage of the incident was released by the Idaho State Police later that day.

The mishap, according to authorities, was part of a six-car collision on the eastbound Interstate 84 in Idaho.

The footage starts by showing a man changing a flat tire on the front driver’s side of his car, while an officer in a high-visibility vest assists at the rear of the vehicle. Suddenly, a white pickup truck smashes into the parked car, sending the officer falling backwards over the median barrier to avoid being hit by the wayward vehicle.

Passing drivers called the emergency services and the injured trooper was taken by ambulance to a nearby hospital, where he was treated for minor injuries and released.

The man repairing the flat tire also reported minor injuries, but did not apparently need to be taken to hospital.

“The preliminary investigation indicates one vehicle began to slow prior to passing the patrol car,” the Idaho State Police’s press release said. “That vehicle was hit by another, causing a chain reaction of four eastbound vehicles. Two involved pickups were pushed left, sideswiping the parked patrol car and hitting the rear of the Toyota.”

Idaho police did not immediately disclose the names of those involved in the mishap, nor was it clear whether the driver who smashed into the parked vehicles will face any charges.

The lanes on the eastbound side of the interstate were blocked for around 90 minutes following the incident, as emergency responders assisted the injured and cleared the scene of debris. The mishap remains under investigation by the Idaho State Police.

According to state law, Idaho drivers are required to “slow down, change lanes, or both when passing police vehicles, emergency vehicles, tow trucks, and highway incident response vehicles stopped on the roadway.”

“Traffic stops are very high risk,” said Sgt. Brandalyn Crapo of the Idaho State Police. “They’re necessary to keep people safe on the road and to help those stranded, but we need motorists’ help so we can all go home at night.

“Slowing down and moving over for emergency vehicles and workers isn’t just a courtesy, it’s the law. Drivers need to be alert to emergency lights and vehicles and always alert to what’s happening around them. That keeps all of us safe.”