Cruz plans to take home Gervonta Davis’ WBA title, while providing boxing with its biggest upset of the year. 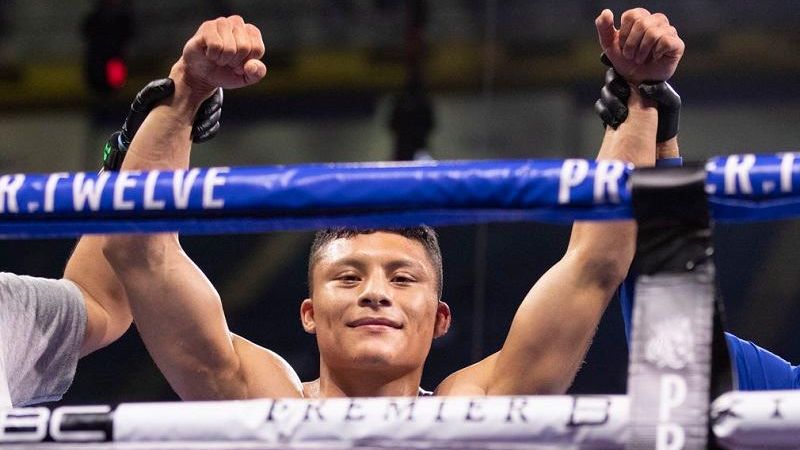 When Sandor Martin defeated Mikey Garcia in October, many observers dubbed it the “Upset of the Year.” Not to be outdone, last weekend, George Kambosos made his submission for that crown when he defeated Teofimo Lopez to become the unified lightweight champion.

Now, Isaac Cruz has the opportunity to seek the “UOTY” on Sunday, when he faces fierce puncher Gervonta “Tank” Davis, who is 25–0, with 24 of those wins coming by way of knockout. Davis is easily becoming one of boxing’s biggest attractions due to his high knockout ratio, charisma and willingness to move up in weight to face guys much bigger than he is.

However, Cruz is 22–1–1 and hasn’t tasted defeat in five years. Cruz is currently on an 11-fight win streak and looks to bring the Tank to a screeching halt on Sunday night. Sundays aren’t typically made for violence, but Davis-Cruz has all the makings of a classic lightweight war. In fact, Cruz promises one.

“Pitbull” sat down with Zenger to discuss the significance of a win this weekend, his preparation for Davis and how he plans to shock the boxing world.

Zenger: How has training camp been in preparation for your fight against Gervonta Davis on Sunday?

Cruz: My preparation was very varied and versatile because we had a lot of names that were being brought to us as potential opponents. We just made sure to stay ready for any and all opponents. Training camp has been very productive. I have been doing a variety of things that you will be able to see on Sunday night.

Zenger: Fighters are creatures of habit, and most fights of this magnitude take place on a Saturday night. Does it change your approach at all that this fight is being held on Sunday night?

Cruz: It doesn’t affect me at all. That’s what preparation is for. We knew this fight was going to be on a Sunday, so we prepared both mentally and physically for it. We will be ready for whatever it takes to come out with the win.

Zenger: Have you been inspired by upsets like Sandor Martin’s win over Mikey Garcia, George Kambosos’ win over Teofimo Lopez? Do you feel you can keep this “Year of the Upsets” going?

Cruz: Absolutely! That’s been our mindset, to be able to pull off the upset against Gervonta since the fight was announced. Regardless of what anyone else does, I’m going to be the one pulling off the biggest upset of the year when the time comes.

Zenger: Did you have to get with your team and really go through a thought process before accepting this fight when Rolly Romero was pulled from the main event, or was this an easy decision?

Cruz: No, I didn’t even have to think about it. I knew this was my opportunity. I’m ready to face him and show him that I am a quality opponent.

Zenger: Davis has grown accustomed to fighting guys so much taller than him. Do you see your being shorter than him as an advantage?

Cruz: When it comes to height, it won’t affect me at all, and I’m sure it won’t affect him. Each opponent is different. It doesn’t matter to me how tall or short somebody may be, because in the end, my ability will show in terms of what I can do inside of the ring.

Zenger: You are an aggressive fighter from the opening bell, and Gervonta maintains his power throughout the fight. That being said, can we expect a more cautious version of Isaac Cruz early on until you figure things out?

Cruz: My training is to come out and be aggressive from the first round. I’m not going to betray what got me here. I’m going to be the same Isaac Cruz that I have always been, and I will give it my all from the get-go.

Zenger: Does him being a southpaw pose any issues for you?

Cruz: That doesn’t worry me at all. The key point for me is to always be focused and take advantage of the opportunities that are given. Being destructive can be costly, so I will be on my game and ready to counter anything that he throws.

Zenger: Have you studied film on Gervonta, or do you prefer to figure your opponents out in real time, during the fight?

Cruz: Yes! You always have to study your opponent. There is no taking anything for granted, especially against a quality opponent like Gervonta Davis. Having said that, I’m confident in my preparation. When I come out to that ring, I will have studied Gervonta and be confident in my ability as well.

Zenger: What would it mean for you to take Gervonta’s title, while handing him his first defeat?

Cruz: It would be huge. It would be something that I have dreamed about my whole life. That’s why I will be more than ready to accomplish this on Sunday night.

Zenger: For anyone who hasn’t watched an Isaac Cruz fight and will be tuning in for the first time on Sunday, what can they expect from you?

Cruz: This is going to be a war. You can expect me to give it my all. This will be two fighters that are going to be going at each other. It’s going to be an extremely fun fight. I cannot wait to see you at Staples Center, or tune in on pay-per-view — you’re not going to regret it.