The pair is now thriving, as they delight visitors with horseplay in their Basel Zoo enclosure. 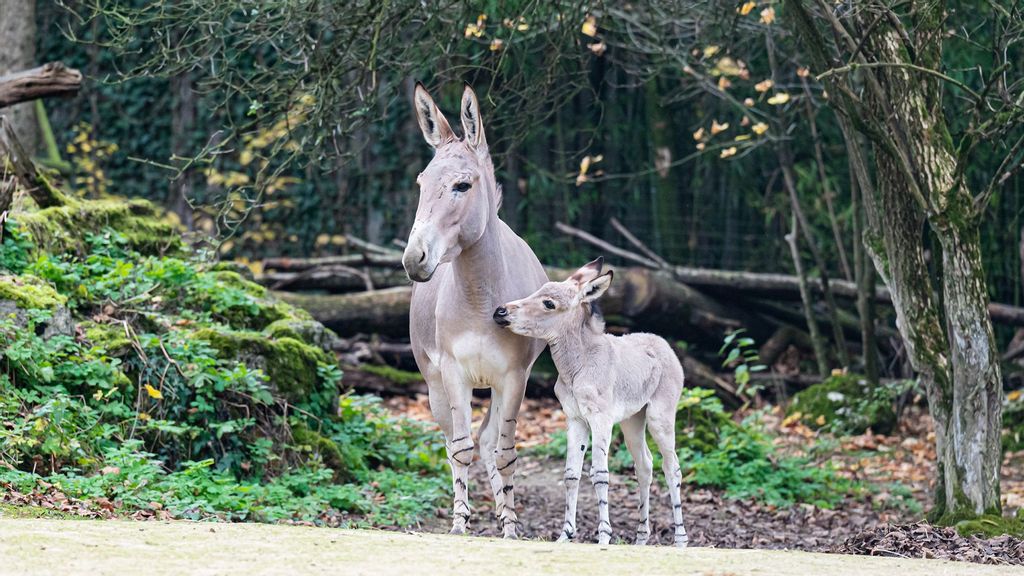 Somali wild ass offspring Salia was born in the Basel Zoo in Switzerland on Nov. 13, 2021. She stands alongside her mother, Mwana.  (Zoo Basel/Zenger)

A critically endangered Somali wild ass born at a Swiss zoo was initially rejected by its nervous, first-time mother. That is, until veterinarians and zookeepers helped the two bond.

The Somali wild ass foal, called Salia, was born at the Basel Zoo in Switzerland to mare Mwana and stallion Adam on Nov. 13. However, the “natural mother-foal bond was broken after the birth,” the zoo said. The mother initially rejected her foal and stopped it from feeding.

The Basel Zoo said: “The mare Mwana was visibly stressed and overwhelmed with the young animal after giving birth — which often happens with first-time mothers.

“This meant the bond between mother and young animal could not develop properly. Mwana showed no interest in her foal, and drove Salia away as soon as she wanted to drink. The foal’s chances of survival dropped drastically.”

The zoo consulted with two local horse specialists and decided to give the mare “a hormone injection, so she could relive the birth hormonally.

“The vital bond between mother and foal was established within 30 minutes. For the first time, little Salia was allowed to drink extensively. Today, the offspring is fine,” the zoo said.

“She is playful and likes to test her long legs when she sprints with her mother in the outdoor area.”

The footage shows an energetic Salia discovering her surroundings under the watchful eye of her mother.

Somali wild asses are listed as critically endangered on the International Union for Conservation of Nature’s Red List of Endangered Species, with fewer than 1,000 individuals estimated to remain in the wild.

The zoo said Salia is among approximately 200 wild asses living in zoos worldwide.

“In nature, these donkeys are threatened with extinction and are among the rarest mammals. Only a few hundred animals still live in Ethiopia, Eritrea and perhaps Somalia. Wars, competition with the livestock of the population, and the meager food and water reserves have decimated their populations in recent years,” the zoo said.

The species’ declining numbers makes the efforts of the zoological gardens crucial. The European Endangered Species Program works to preserve this rare mammal. The Basel Zoo coordinates the program for the Somali wild ass and maintains the international herd book.

The wild ass is considered the origin species for the donkey, domesticated more than 6,000 years ago in North Africa. Its name derives from the Latin word for the donkey: asinus.