Remote-controlled aircraft, demonstrated in Bali, is designed for island-hopping passengers and aerial sightseeing. 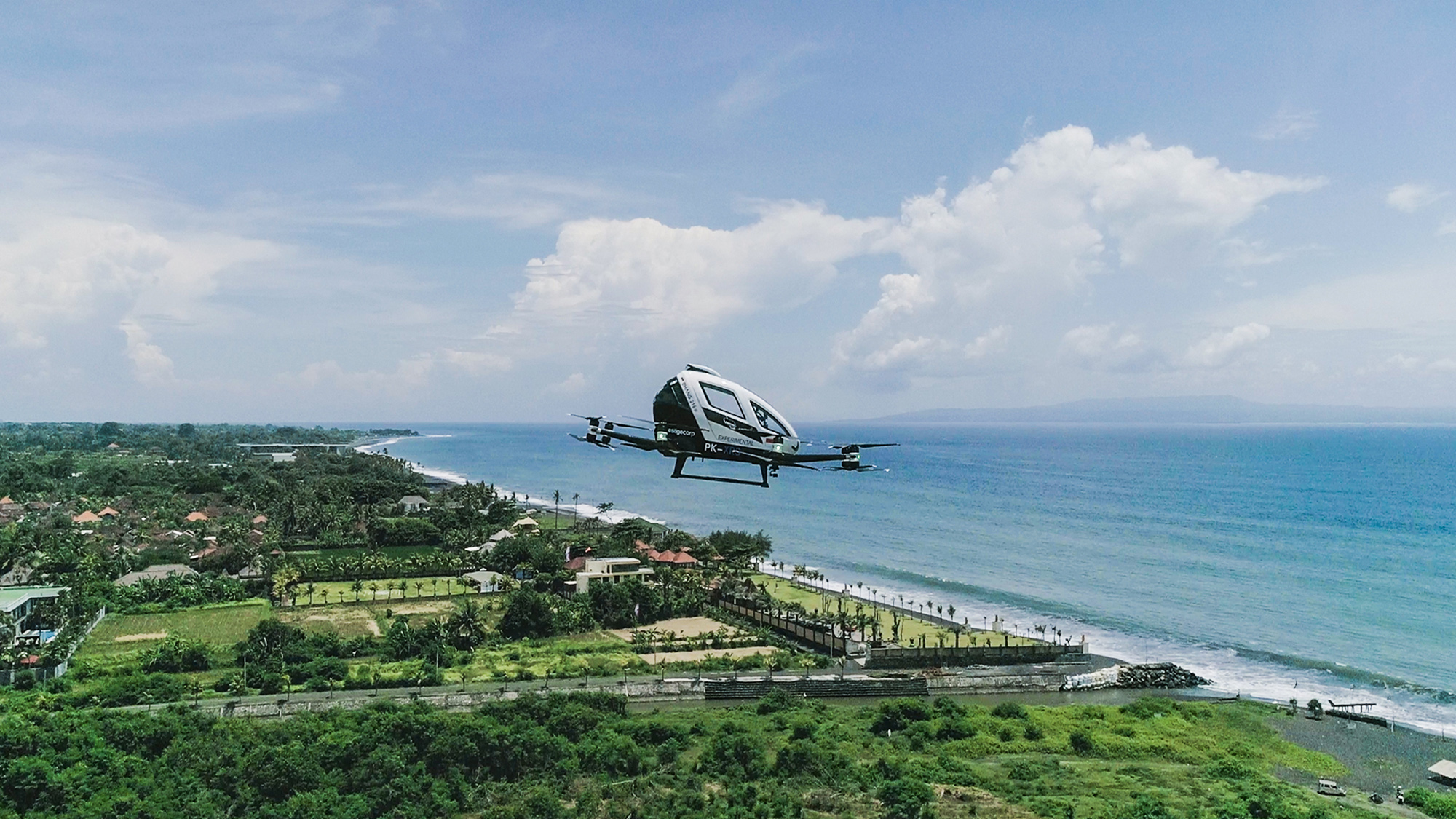 The autonomous aerial vehicle EHang 216 completed its debut flight demonstration in Bali, Indonesia, on Nov. 29. It is envisioned as being used for aerial sightseeing and island-hopping in the Southeast Asian country. (EHang/Zenger)

Ready to take to the friendly skies without a pilot? At least, not a human one in the cockpit.

An autonomous aerial vehicle, with vertical takeoff and landing, is poised to tap into the travel industry following the successful five-minute debut demonstration of the EHang 216.

The Chinese-made autonomous aerial vehicle completed its first flight on Nov. 29 at Villa Blackstone Beach in Bali, Indonesia, soaring out across the ocean in a demonstration of aerial sightseeing. Officials watched from the ground; no one was onboard the aircraft.

“We are pleased to join hands with Indonesian local partners to bring our leading AAVs and Urban Air Mobility solutions to Indonesia, one of the most promising UAM markets in Southeast Asia.”

Much like the benefits of autonomous electric road vehicles, “the technology of autonomous flight eliminates the possibility of failure or malfunction caused by man-made errors,” Ehang states on its website.

“Without any concern about controlling or operating the aircraft, the passengers can just sit and enjoy the journey. Flight routes will be surveyed in advance to preset multiple feasible plans for the user. EHang AAV uses 4G/5G as the high-speed wireless transmission channel to communication smoothly with the command-and-control center, thus enabling remote control of the aircraft and real-time transmission of flight data.”

The demonstration flight was conducted in cooperation with an Indonesian local partner, Prestige Aviation, a subsidiary of Prestige Corp.

“Prestige Aviation aspires to be the pioneer to provide smart city innovations with digital-based transport implementation.”

Indonesia’s Directorate General of Civil Aviation issued a Special Certificate of Airworthiness, allowing the aircraft to be the country’s first passenger-grade AAV approved for a public unmanned flight demonstration.

Among the witnesses to the demonstration, Bambang Soesatyo, chairman of the Indonesian People’s Consultative Assembly, said, “We are entering a new chapter of transportation. As a modern transportation solution, EHang 216 will change our lifestyle in the future.”

“The Fail-Safe safety system serves as a reliable guardian by equipping itself with multiple-redundant protection plans. The system can monitor each airborne device and acquire its operating status and health condition, and then transmit the information back to the command-and-control system.

“In case of any abnormal condition, a smoothest route will be selected and executed based on the preset algorithm logic to safely take the passenger to the destination.”