Letter with a 234-year-old plea from the Russian empress urging people to get the smallpox vaccine was sold at auction. 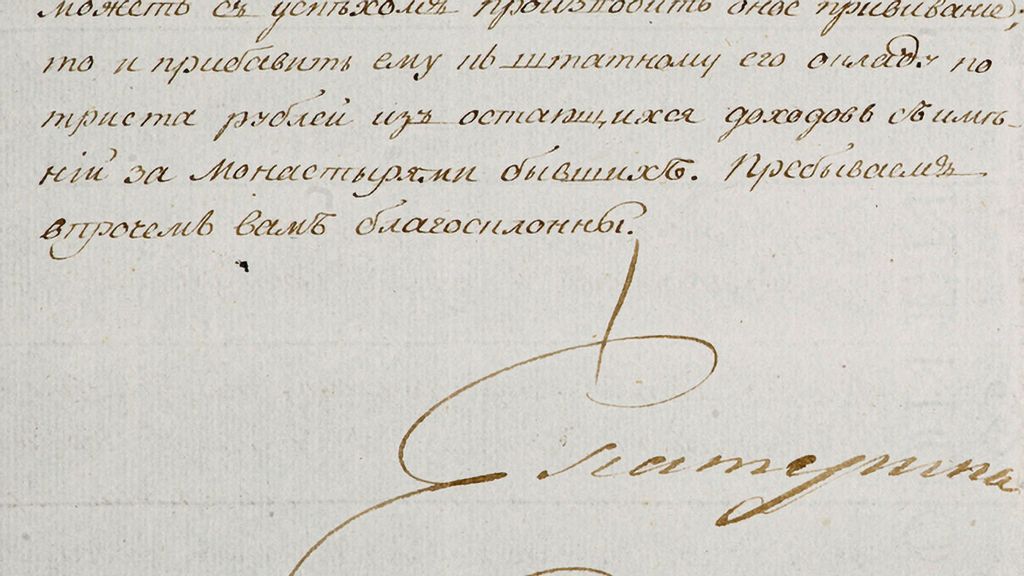 The letter written by Catherine the Great about the importance of vaccination, along with a portrait, fetched $1.26 million at auction. The buyer was not identified. (McDougall Auctions/Zenger)

A letter written by Empress Catherine the Great of Russia in 1787 advocating vaccination has been sold at auction for $1.26 million, along with a portrait of her.

The portrait by Dmitry Levitsky, as well as the letter about the benefits of vaccination against smallpox, were auctioned by McDougall’s in London on Dec. 1.

The founder of the auction house, William McDougall, confirmed the figure. The buyer was not named.

“The Catherine the Great letter received great interest and publicity in Russia and the West given its relevance to current events,” he said. “Moreover, the portrait was an unusual contemporary painting of Catherine by a Russian, and so is important to the history of Russian art.”

The letter and portrait had been valued at between $1 million and $1.6 million.

The famous Russian empress was the first in the country to be vaccinated against smallpox after her future husband was disfigured during an epidemic of the disease.

She wrote the letter to explain how to organize a vaccination campaign on a large scale, warning that without vaccination, there would be “great harm especially among the common people.”

Catherine the Great (1729–1796), also known as Catherine II, wrote the letter, “about inoculating against smallpox in parts of present-day Ukraine” during a trip to Crimea. It was addressed to Count Piotr Aleksandrovich Rumiantsev.

The letter is the first known document regarding Russia’s first vaccination campaign, according to the auction house, which specializes in Russian art.

McDougall said the letter is “certainly topical at the moment” and that it is “very interesting that prominent leaders encouraging vaccination is nothing new.”

The letter reads: “Count Piotr Aleksandrovich, among the other duties of the Welfare Boards in the Provinces entrusted to you, one of the most important should be the introduction of inoculation against smallpox, which, as we know, causes great harm, especially among the ordinary people.

“Such inoculation should be common everywhere, and it is now all the more convenient, since there are doctors or medical attendants in nearly all districts, and it does not call for huge expenditure.

“To set an example of this, issue an order on the first occasion in each provincial town, to count the remaining superfluous conventual residences or the small monasteries that have been abolished, and build the minimum number of lodgings for the temporary stay of those who are unable to have this inoculation at home; money needed for this could be borrowed from town revenues.

“Provincial doctors can put this matter right, especially since now there are people sent from us who have a low salary against the regulations: so, since Dr Gund in Novgorod-Seversky can successfully carry out this inoculation, then add three hundred rubles to his regular salary from the remaining income from the former monastery estates. We remain, by the way, favourably disposed towards you.”

It is signed “Catherine” and, according to the auction house it bears her personal signature.

McDougall said it is not only a unique, authentic document from that age, “but also an extremely pertinent testimony to the statecraft and foresight shown by the great monarch.”

Catherine the Great ruled Russia from 1762 until her death in 1796.

After successfully being vaccinated against smallpox, she “proudly wrote to her ambassador plenipotentiary in Britain, Count Ivan Grigorievuch Chernyshev,” saying: ‘We now have only two topics of conversation: the first is the (Russo-Turkish) war, and the second is vaccination,” according to the auction house.

“Starting with me and my son, who is also recovering, there is no noble house in which there are not several vaccinated persons, and many regret that they had smallpox naturally and so cannot be fashionable. Count Grigory Grigorievich Orlov, Count Kirill Grigorievich Razumovsky and countless others have passed through Mr Dimsdale’s hands – and even renowned beauties… Here is what example means.”

The portrait that was sold with the letter was described by the auction house as “one of the examples of Catherine the Great iconography, which are extremely rare on the art market.”