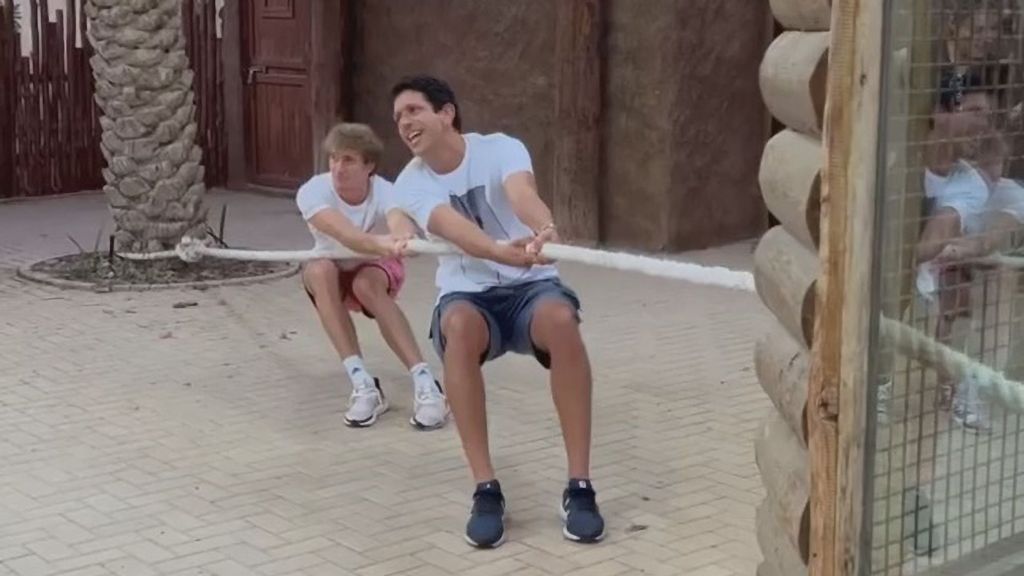 Tennis stars Alexander Zverev (left) and Marcelo Melo are facing backlash after getting into a tug-of-war with a lion in Dubai, UAE, in late November. (@marcelomelo83/Zenger)

German tennis player Alexander Zverev, a permanent fixture in the top 10 since 2017, has been criticized for showing footage of himself taunting a lion in a tug-of-war match at a private zoo in Dubai.

Zverev won the 2021 ATP Finals in Turin, Italy, on Nov 28. He beat Daniil Medvedev, the Russian defending champion, in straight sets. He went to Dubai, in the United Arab Emirates, to collect his prize money, over $2.1 million.

The footage shows the tennis ace pulling on a thick rope, along with Brazilian tennis player Marcelo Melo, while the animal inside its enclosure pulls on the other end.

His friend said: “One, two, three!” And Zverev, laughing, said: “And what exactly do you want me to do… when you say three?”

In an interview, PETA Germany said: “At PETA Germany, we’re deeply disappointed that tennis player Alexander Zverev has visited the infamous private zoo, Fame Park, in Dubai and even participated in a tug of war with a captive big cat.

“We have reached out to Alexander Zverev and informed him that zoos are essentially prisons for animals,” said the organization. “For mere human entertainment, wild animals are locked up for life and put on display. The animals suffer from confinement and lack of mental stimulation; which is why many show signs of stereotypic behaviors in captivity.”

“Baby animals in particular are often misused as visitor magnets and for cub petting. Animals such as bears or big cats are typically separated from their mothers prematurely to ‘tame’ them and trained by force and coercion to be used as profitable photo props.

“PETA Germany is urging Alexander Zverev to avoid zoos in the future and instead support or visit reputable sanctuaries, which do not breed animals into a life in captivity and would never encourage direct-contact encounters with wild animals in their care. PETA Germany is campaigning for an end to the keeping of animals in zoos, because animals are not there for human entertainment.”

Zverev is now prepping for the Australian Open, which starts in Melbourne on Jan. 17, 2022. He has not commented on the public criticism.