Getting Their Kicks In: Urban Initiative Brings Soccer Fields To Underserved Cities

Goal is to enhance physical and social well-being of kids who lack resources and opportunities. 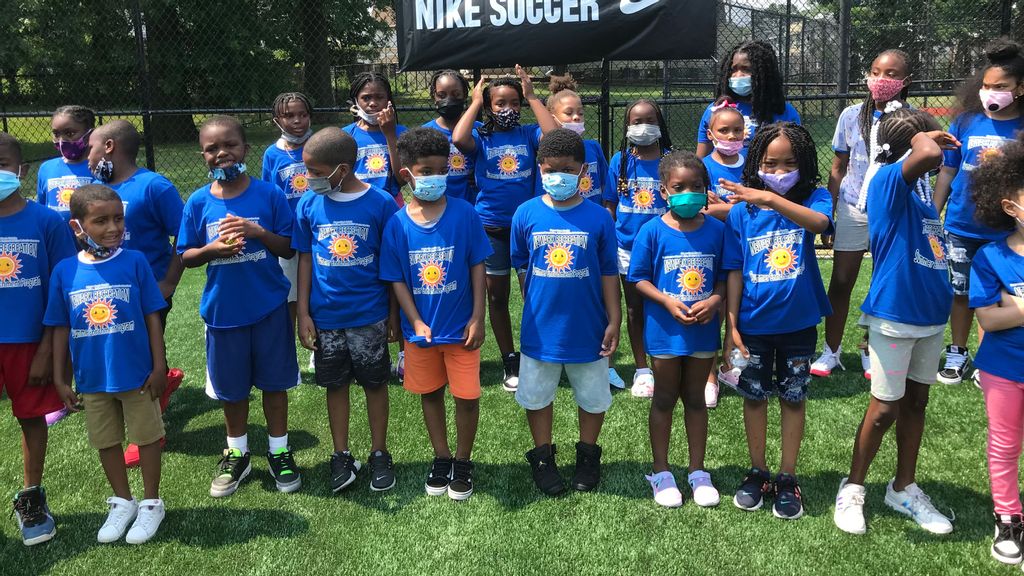 NEW BRUNSWICK, N.J. — Children in some urban communities in New Jersey are benefiting from new soccer fields aimed at making the game accessible to those who lack the resources or opportunities to play.

The practice fields were built by the Players Development Academy Urban Initiative in collaboration with RWJ Barnabas Health.

The goal of the initiative, founded during the pandemic, is to provide soccer facilities and coaching to children in underserved urban communities to enhance their physical and social well-being. Five turf fields have been built since January: two in New Brunswick, and one each in Newark, Hamilton and Belleville. There are plans for additional fields in other New Jersey communities before duplicating the program nationally.

“There are plenty of soccer fields around, but not in these underserved communities,” Gerry McKeown, the initiative’s director, told Zenger.

“I thought that if we can bring the game to underserved communities, we can help those communities, increase the pool of athletes that are exposed to the game, give kids a chance to fall in love with the game, and perhaps break the cycle of poverty by getting a scholarship to a college or maybe becoming a professional.”

Founded in 1998 and based in Somerset, New Jersey, the Players Development Academy is a training program that offers instruction and top-level competition for boys and girls. McKeown is the boys executive director of coaching.

He came up with the concept for the Urban Initiative during the pandemic. He looked at the success of the academy and all the young athletes throughout the years who have received college scholarships to play soccer and some who have gone on to professional careers. But there was something he didn’t like.

“Soccer has become an upper-middle-class sport with all the travel teams and the money needed for that,” McKeown said. “We’re the only country in the world where it has become a game of relative wealth. The better you are, the more it costs you. In every other country, it’s a game for the poor. There is no cost. We’re the antithesis of the rest of the world.”

The Urban Initiative concept is similar to building a neighborhood basketball court that’s open to the public for informal pickup games anytime. Many of the greatest basketball and football players in the country learned their games on public courts and fields in urban communities. McKeown believes the same can happen with soccer.

“Providing soccer fields children can walk to from their house might give them a chance to learn the game,” McKeown said. “Kids are so orchestrated these days. This is an organic environment with not much instruction. It’s peer-learning.”

There are health and social benefits, too, which is why RWJBarnabas Health agreed to fund the majority of the fields. President and CEO of RWJBarnabas, Barry Ostrowsky, was contemplating ways to invest in communities to promote physical activity and recreation, particularly for young people.

“One of the social detriments keeping people unhealthy is the lack of facilities for children and others to get exercise outside,” Ostrowsky said. “Typically, vulnerable communities are not communities in which they build great outdoor recreational facilities. When they told me about PDA’s Urban Initiative, it was just perfect. Their mission and our mission are precisely aligned.”

When McKeown spends time at one of the fields in New Brunswick, he first sees young kids playing after school. Later in the afternoon, young men and adults start to appear, accompanied by their children and families. The fields, approximately 40 feet-by-70-feet, are much smaller than regulation soccer fields, and teams are usually 5-on-5. The ball is always in play because the field is fenced.

“In these environments, you’re on the ball the whole time,” McKeown said. “The kids get a lot of touches. It’s about having the ability to be creative and sharpen your skills. It’s a lot different teacher than a normal soccer field.”

McKeown is not only watching to see how the fields are being used, but he is also searching for the diamond in the rough, who might be an exceptional talent.

“Any kid who shows any promise, our club has agreed to provide a scholarship to the Players Development Academy for that kid to participate free of cost,” McKeown said. “We’ll try to get as many of these kids in our program as we can.”

Ostrowsky grew up in an era when kids met at the neighborhood field or court and played whatever sport was in season.

“If there was a field available anywhere near us, we used it,” Ostrowsky said. “We didn’t have to reserve it or join a league. We just used it. That’s the kind of thing you see with the … Urban Initiative.  You see people coming out because they want to use it.”

Each soccer field costs an estimated $70,000 to build, which Ostrowsky sees as a worthy investment.

“It warms my heart to know that we’ve actually put resources into something that will not only be used immediately but used happily and to the benefit of those who use it,” Ostrowsky said. “People talk about building recreational complexes with gyms and practice fields costing millions of dollars. These fields are far less expensive and can be done quickly in areas and on land people may not want.”

McKeown, who was born in Glasgow, Scotland, moved to Kearny, New Jersey, where he played soccer in high school and then at North Carolina State. He has been with the Players Development Academy for 21 years and is widely recognized for his coaching skills. But he insists “our reach needs to be bigger.”

The next field will be built in Perth Amboy with an individual sponsor.

Camden, Elizabeth, and Paterson are other locations being considered before the program undertakes plans to expand nationally to urban areas in major cities.

“There’s a lot of places that can use these things as a positive influence,” McKeown said. “These fields serve as a distraction from all the negative influences and provide positive socialization as well as promote physical and mental well-being.”