Surprised officers found the marine mammal in the middle of a highway and steered her back toward the water.
By Lee Bullen November 30, 2021
Facebook
Twitter
Linkedin
Email 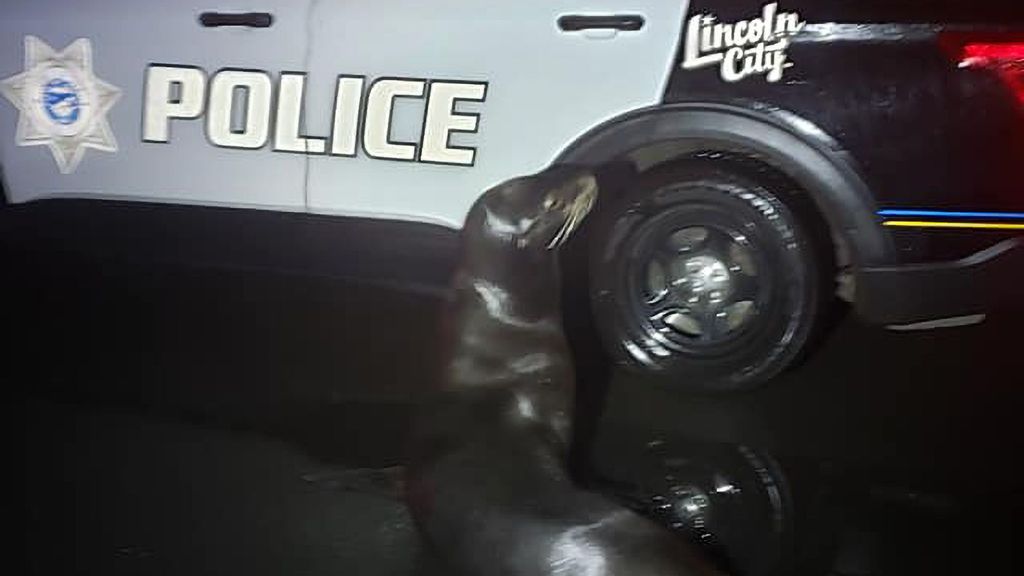 The curious sea lion checks out a parked patrol car in Lincoln City, Oregon, before she was carefully “escorted” back into the water. (Lincoln City Police Department/Zenger)

Police on the central coast of Oregon corralled a wayward sea lion and steered her toward the nearest river point after she declined to follow the fish bait dangled in front of her.

The sea lion, named Tiffany by Lincoln City police, was spotted wandering the streets of a neighborhood before resting near a highway.

“Lincoln City Police Department officers arrived on scene and set up a perimeter around the sea lion … to keep her from getting struck by a vehicle. Tiffany was very content on staying in the middle of the roadway and slowly moved closer to Hwy 101,” the police posted online on Nov. 26.

“As LCPD does not deal with situations like this on a regular basis, we called in for assistance from the Oregon State Police Fish and Game and North Lincoln Fire and Rescue,” police said, noting that for one of their veteran officers, who has been in the area for more than 20 years, “this was a first for him.”

“Over the course of the next couple hours, several different plans were made and attempted,” police said.

“In an effort to get Tiffany to the water with as little stress as possible, we attempted to bait Tiffany with some delicious fish. An officer responded to Kenny’s IGA Village Market in Taft and explained what was going on. The staff at Kenny’s donated several packages of fish to our cause and refused payment for the fish, insisting they wanted to do what they could to help out the animal.

“The gift of fish was presented to Tiffany, who was interested in the fish, but was likely too overstimulated and unfortunately was not willing to follow the bait,” police said.

Next, the police decided to use sheets of plywood to create a mobile corral “and herd Tiffany to the nearest river access, which was about three blocks away. North Lincoln Fire had some sheets of plywood brought to the scene and the plan was put into motion.”

“The plan was working, and Tiffany began moving in the right direction,” police said. “After several breaks for the sake Tiffany’s health, (and a few refreshing soaks from garden hoses) she was guided to an opening which led down to the river. The tide was currently out and would be a while longer before she would be covered in water completely, but she settled down happily a small stream section and seemed content to wait it out until the next tide.”

Police posted images of the sea lion in the middle of the road, blocking traffic while curiously checking out a patrol car parked nearby, before she was successfully edged into the water.