The 21-Year-Old Devoted To Trash Talk

Nigerian-Israeli founded a global movement to pick up trash and is now diving into a wide range of environmental activities. 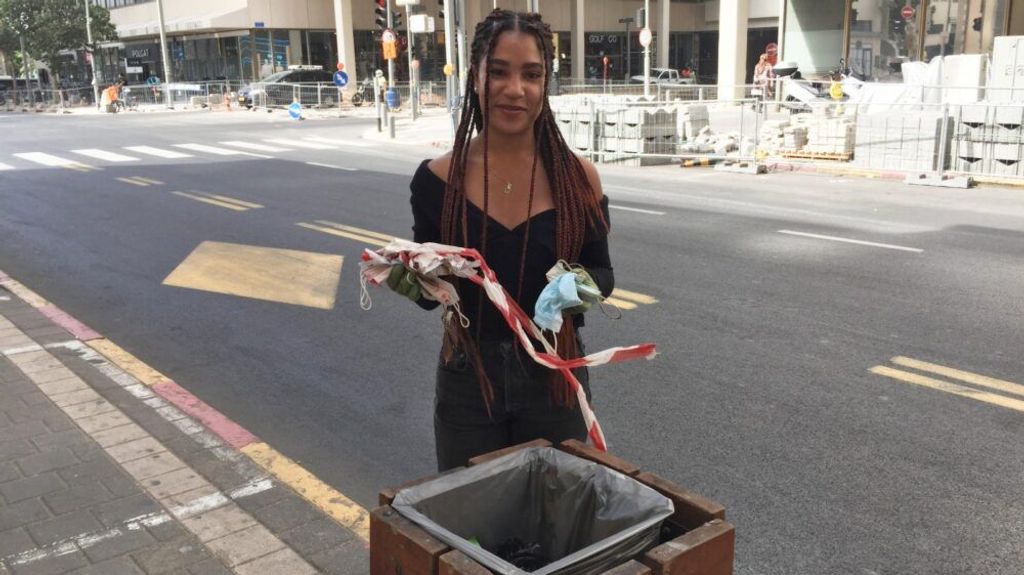 Sharona Shnayder throwing away trash she picked up on a Tel Aviv street. (Diana Bletter)

Nigerian-Israeli environmental activist Sharona Shnayder, at 21, is “focused on politics because without legislation, nothing can change.”

Shnayder, who moved to Israel last May, is co-founder and CEO of Tuesdays for Trash, a global environmental movement that encourages individuals around the world to dedicate at least one day a week to picking up garbage.

Shnayder started the movement during a COVID lockdown in May 2020, when she was restless to get out of her room at Portland State University and “do something.” Putting on masks and gloves, she and a friend, Wanda McNealy, began picking up trash.

They did it the following week and then the next, and the initiative grew into Tuesdays for Trash. In a little more than a year, Shnayder has grown the movement to 23 countries with 10 chapters.

And since arriving in Israel, Shnayder has dived into a mind-boggling assortment of environmental activities, including speaking at high schools and demonstrations and planting seeds for her political future.

The young environmental activist was born in Lagos, Nigeria, to a Nigerian mother and an Israeli father. When she was eight, she moved with her father to Tualatin, a small suburb of Portland, Oregon, where she grew up.

She was in college when she watched Greta Thunberg from Sweden speak at the United Nations. At the time, Shnayder was studying accounting.

“I was good at it, too,” Shnayder said, “but I realized that I don’t want to spend my life crunching numbers if there isn’t going to be a planet. As much as it is a cliché, it’s true.”

She didn’t have to look far to see the disastrous effects of climate change. All around her in Oregon, wildfires were spreading.

“I’d look at the red sky and all the smoke and it almost felt like we were in an apocalypse,” she said.

“The weather was 116 degrees Fahrenheit, which is hotter than the Sahara. Cable lines were melting. Sweating isn’t even healthy. Your body can’t regulate so you can suffocate. Breathing outside for one hour was equivalent to smoking a pack of cigarettes.”

She also talked about her new position at Albo Climate.

“It’s like my dream job,” she said. “It’s a high-tech startup which uses satellite imagery and A1 to map and monitor carbon sequestration.

“That’s a way to take the carbon out of the air and bring it back into the soil. Our company works with projects in Africa that are working on managing forests and regenerative agriculture.”

She said she got the job through a WhatsApp group in Israel.

Shnayder had never been to Israel when she considered moving there. While at the university in the United States, she got involved with the Jewish Student Union. “The students there were so funny and made me feel so welcome,” she said.

Although her father is Israeli, it was the first time she started to explore her Jewish roots. She came on a Birthright trip last year and then continued with a Masa Israel Journey program working as an intern at UBQ Materials, a company that promotes recycling and waste management. She decided to stay in Israel.

“It was a strategic move for me,” she said.

“I know, I overthink everything,” she said. “But in Oregon, I was fearful. I was thinking, how am I going to live? What do I do to survive?”

Israel, she said, is where innovation is happening. “Israel can be a leader around the world for setting standards for sustainable society. We have the ability to implement widespread change if we can convince people to care.”

Soon after Shnayder arrived, she began the Israeli chapter of Tuesdays for Trash and has organized weekly cleanups in Tel Aviv.

Her group will participate in nationwide beach cleanup day on Dec. 3, and she hopes to organize intercultural cleanups in Tel Aviv and Jaffa with HaBayit (TheHome), which sponsors Israeli-Palestinian dialogues and “Cleaning the Hate” litter cleanups.

“I know a lot of people ask, ‘Why does it even matter?’ because there’s so much trash,” Shnayder said. “But if billions of people around the world pick up one piece, that’s seven billion pieces.’”

There’s also an awareness aspect. “It gets you thinking, ‘Hey, this is going back to a landfill. Then you think, ‘Who’s responsible for the litter?’ This is an educational tool. It’s a gateway into action.”

She said companies are “unwilling to make the switch and our governments are allowing them to continue to make money. As much as I’d love to think that companies care and they’d be ethical, they’re not.”

Israel needs laws that “hold big businesses — producers and manufacturers — responsible for the plastic pollution being created,” she said.

Shnayder would like to see the government implementing incentives and subsidizing eco-friendly materials that can substitute for plastic, as well as providing tax benefits for utilizing renewable sources of energy instead of fossil fuels.

Although a newcomer, she was one of the speakers at an Oct. 25 demonstration with Extinction Rebellion and other environmental activists outside Israeli President Isaac Herzog’s residence as the Israeli delegation to the United Nations COP 26 Climate Talks in Glasgow, Scotland, were meeting inside with the president.

Shnayder said she feels in some ways she and other environmental activists gave up their childhoods to force governments to make changes.

“I don’t love to wake up and think about these issues,” she said. “I’d love to follow my dreams and live my life but if we keep going, business as usual, for the next seven years, we’re not going to survive.”

She said wildfires are growing more intense and the rising sea levels have accelerated rapidly.

In Israel, she would like to see a more “robust educational system around climate and the environment so our society can be equipped with the knowledge and understanding of how to work towards a sustainable future. We are in a generational battle to determine the livability of our future on this planet.”

This planet we call home

When she’s not “strategic thinking,” as she puts it, Shnayder likes to spend time in the Israeli National Park near where she lives in Ramat Gan, a suburb of Tel Aviv.

“I just sit there and be in that space, where there’s a lot of water and trees. It’s really cool to be so still and be a part of nature,” she said. She believes that Jewish values should lead Israelis “to take tangible steps to take care of their home.”

Beginning in January, every Birthright trip that comes to Israel can put Tuesdays for Trash on its itinerary.

“It could be influential and have an impact as part of your lifestyle of caring for the environment and love for your community,” she said. “Just like Shabbat for the soul, Tuesday could be the day dedicated to sustainability.

“There’s something called climate doomism that affects environmental activists. It’s easy to maintain a mindset of negativism,” she said, but “at the end of the day, if we don’t face reality and make even small changes, then we’re going to die.

“I’m basically trying to ask people to let me live. I’d like to be part of this planet I call home.”

«Previous Post
How Israel Became The World’s Cyber Powerhouse»Next Post
Sun-Sational Breakthrough: Some Of Earth’s Water Was Brought To The Planet By Solar Winds