Sun-Sational Breakthrough: Some Of Earth’s Water Was Brought To The Planet By Solar Winds 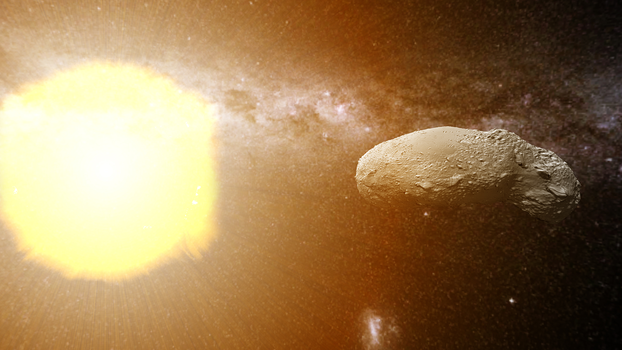 An artistic conception shows the stream of particles from the sun known as solar wind striking the Itokawa asteroid. (Curtin University)

The origin of water, which covers 70 percent of the Earth’s surface, has long eluded mankind, but scientists may have discovered that the sun is the unheralded source.

Waves of charged particles from the sun, known as solar wind, changed the chemical composition of rocky grains of dust to produce water, according to a study published in the journal Nature Astronomy.

“The solar winds are streams of mostly hydrogen and helium ions which flow constantly from the sun out into space,” study co-author Luke Daly of the University of Glasgow said. Water is made up of hydrogen and oxygen. Ions are atoms that are electrically charged, due to having too many or too few electrons.

Daly said that when hydrogen ions hit airless asteroids or dust particles in space, they penetrate a few tens of nanometers below the surface and change their chemical composition. This “space weathering” from the hydrogen ions eventually ejects enough oxygen atoms from the rock to create water molecules, the combination of two hydrogens and one oxygen.

Some scientists had theorized that C-type asteroids, which carry water, may have brought it to Earth about 4.6 billion years ago. Previously, scientists tested pieces of C-type water-rich meteorites — asteroids that have fallen to Earth — to determine whether the ratio of hydrogen and deuterium matched terrestrial water. A match could have led to a conclusion that C-type meteorites were the source of water on Earth.

While the water in some meteorites did match Earth’s water, most did not. The lighter isotopic composition of Earth’s water differs from those meteorites. Some water on the Earth, the scientists concluded, must have come from an unaccounted source elsewhere in the solar system.

“Crucially, this solar wind-derived water produced by the early solar system is isotopically light. That strongly suggests that fine-grained dust, buffeted by the solar wind and drawn into the forming Earth billions of years ago, could be the source of the missing reservoir of the planet’s water,” Daly said.

Using an analytical process known as atom probe tomography, the international research team looked at fragments of an S-type asteroid, known as Itokawa, which orbits closer to the sun than C-type asteroids. Their samples were collected by the Japanese space probe Hayabusa and returned to Earth in 2010.

Scientists measured the atomic structure of the dust particles one atom at a time, detecting individual water molecules. They showed that much of the water on Itokawa was produced on the dust grains just below their surface by space weathering.

Early in the formation of Earth, the surrounding space was quite dusty, allowing solar wind-borne particles to produce water beneath the surface of dust grains. The dust and C-type asteroids fell to Earth and covered much of its surface with water. According to Phil Bland of Curtin University, an asteroid such as Itokawa may have produced as much as 20 liters of water for every cubic meter of rock.

“By showing for the first time that water is produced in-situ on the surface of an asteroid, our study builds on the accumulating body of evidence that the interaction of the solar wind with oxygen-rich dust grains does indeed produce water,” Professor John Bradley, of the University of Hawai‘i at Mānoa, Honolulu, said.

How astronauts would get sufficient water, without carrying supplies, is one of the barriers of future space exploration, the researchers said.

The discovery has relevance for missions to deep space, given that water may be found in space-weathered surfaces and could be manufactured by future astronauts to keep them alive on arid planets.

“We think it’s reasonable to assume that the same space weathering process which created the water on Itokawa will have occurred to one degree or another on many airless worlds like the moon or the asteroid Vesta,” study co-author Hope Ishii said.

Regarding NASA’s project to establish a permanent moon base, Daly said that “If the lunar surface has a similar water reservoir sourced by the solar wind this research uncovered on Itokawa, it would represent an enormous and valuable resource to aid in achieving that goal.”