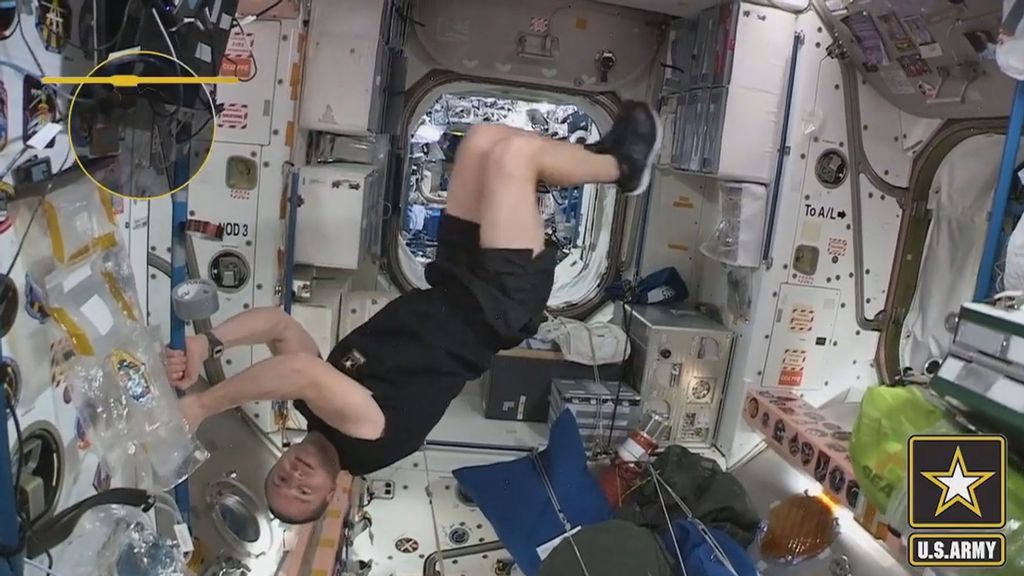 U.S. Army astronaut Drew Morgan exercises in space. According to a new study, microgravity causes more errors in DNA replication, which will lead to premature aging and other negative health effects for astronauts. (U.S. Army/Zenger)

It’s long been known that exposure to radiation damages DNA, but a new study has found an additional risk for astronauts: DNA replication is more prone to errors in microgravity.

Scientists tested whether enzymes accurately copy DNA in cells during microgravity — the weightlessness produced during the freefall of a jet on a parabolic flight pattern. When the so-called “vomit comet” descends more than 2 miles in 20 seconds, the near-weightlessness replicates conditions in space. Accurate DNA replication in space is crucial for astronauts and the future of space travel.

“So-called DNA polymerases are essential enzymes that copy and repair DNA. Inevitably, they aren’t perfect: even under optimal conditions, they sometimes make mistakes. Here, we show that DNA polymerases derived from the bacterium E. coli are considerably more prone to errors under microgravity, such as occurs in space,” said Aaron Rosenstein of the University of Toronto, corresponding author of the study published in Frontiers in Cell and Developmental Biology.

Scientists are already aware that DNA undergoes a higher rate of mutation when exposed to cosmic rays and solar particles. Space radiation causes substitutions of single nucleotides, crosslinks, inversions and deletions, which increases the risk of cancer, genetic defects in a developing fetus and future offspring and the degeneration of tissues and cataracts.

Until now, it was not known whether human DNA replication is affected by weightlessness. If DNA polymerase copies are less accurate, the high mutation rate will increase each time the DNA is copied, resulting in a higher incidence of cancer. In 2020, scientists at the University of Rome Tor Vergata found that exposure to cosmic radiation damages cells and causes the onset of diseases normally associated with aging.

The authors of the new study showed for the first time that the error rate in DNA polymerases in E. coli bacteria is higher during weightlessness. Using a semiautomatic mini-laboratory, they observed a single round of replication of a 1000-nucleotide-long DNA fragment during the parabolic flight of a jet, which simulated space flight conditions.

The scientists faced challenges in using their mini-laboratory during flight conditions that ranged from weightlessness to hypergravity, or two times the gravity on the Earth’s surface.

The dual phenomena of cosmic radiation and inaccurate DNA replication during weightlessness, the authors concluded, pose dangers to astronauts’ health during future missions to the moon and Mars. The study emphasized the need for future spaceships to generate artificial gravity to prevent possible negative health effects for astronauts in deep space.

“We have shown that DNA polymerases similar to those found in mitochondria — the cell’s powerhouses — make more errors in microgravity,” said co-author Virginia Walker of Queens University in Ontario, Canada. “The combined effect of greater damage and decreased replication accuracy could lead to premature aging in astronauts.”