No Fueling: Sugar-Eating Microbes Could One Day Fuel Cars

Genetically modified bacteria that feasts on sugar could one day become a leading biofuel, say experts. 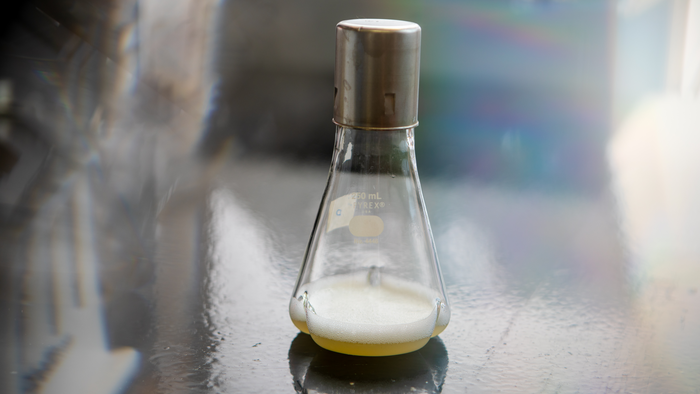 A strain of E. coli that doesn’t endanger human health grows in a flask full of nutrients (the yellow broth). In a study, scientists genetically engineered such E. coli to convert glucose into a class of fatty acids the team then transformed into a hydrocarbon called an olefin. (Douglas Levere / University at Buffalo)

Two scientists have harnessed strains of bacteria that feast on glucose (a type of sugar) and turn it into olefins, a type of hydrocarbon that is a component of gasoline, posing the possibility of a new way to fuel vehicles.

“Making biofuels from renewable resources like glucose has great potential to advance green energy technology,” Researcher Zhen Q. Wang at the University at Buffalo said. “So, the carbon in the glucose — and later the olefins — is actually from carbon dioxide that has been pulled out of the atmosphere.”

Wang teamed with Michelle C. Y. Chang with the University of California, Berkeley to show that strains of Escherichia coliform (E. coli) that don’t affect humans can be tweaked to produce other types of hydrocarbons used in gasoline, while olefins can be used in industrial lubricants and precursors for making plastics.

The study was published in Nature Chemistry.

The research team fed glucose to the E. coli microbes, which were genetically engineered to produce four enzymes that convert glucose into compounds called 3-hydroxy fatty acids. As a catalyst for the transformation of the glucose, the team used niobium pentoxide (Nb2O5). This removed unwanted parts of the fatty acids, while producing olefins. The catalyst and enzymes were identified by trial and error after the team tested various molecules for the two steps in the process.

“We combined what biology can do the best with what chemistry can do the best, and we put them together to create this two-step process,” said Wang. “Using this method, we were able to make olefins directly from glucose.”

Glucose and oxygen are products of photosynthesis in plants, which draw carbon dioxide and water from ambient air. Feedstock for producing ethanol, which is used in biofuels, are barley, corn, sorghum, sugar cane and sugar beets. All of them contain substantial amounts of glucose. Glucose is also found in grasses and trees as well as waste products such as corn cobs and stalks.

More research is needed to determine what benefits the new method has and if it can be scaled up to produce biofuels. One unanswered question is whether the amount and cost of the energy required for the process are too high. The technology may need optimization to be practical in industrial applications.

Wang said the process takes 100 glucose molecules to produce about 8 olefin molecules. This ratio would have to be improved, she said, by inducing the microbes to produce more of 3-hydroxy fatty acids per gram of glucose consumed.