Programmed robots built the modern version of the 73-foot-tall tribute to the biblical king’s wife. 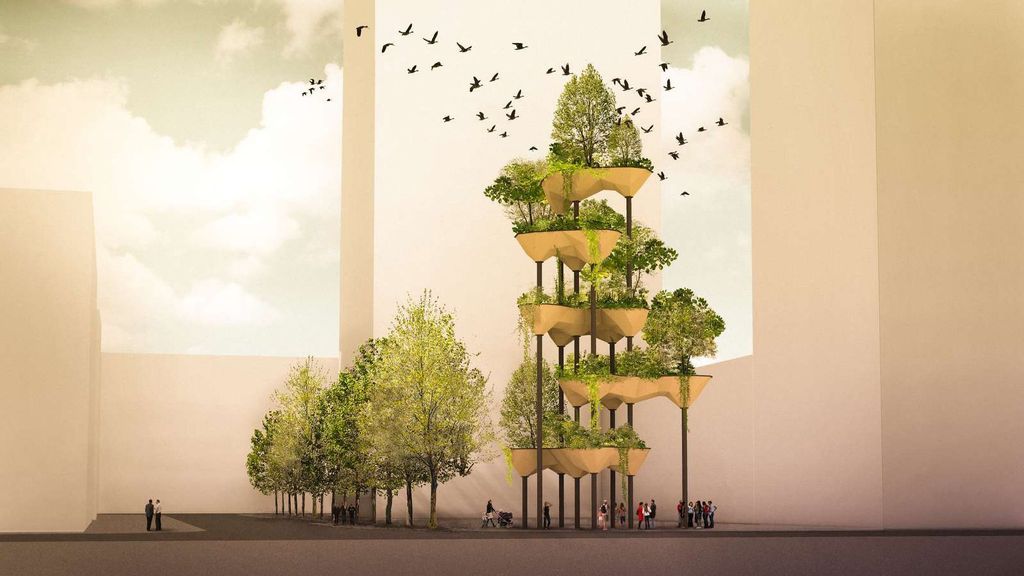 The model of the finished sculpture, named “Semiramis” after Queen Amytis, for whom the original Hanging Gardens of Babylon was built. The design was produced with the help of an AI specifically developed for the task. (Gramazio Kohler Research-ETH Zurich/Zenger)

A massive sculpture designed with the help of artificial intelligence and being built by robots has its roots in the past, drawing inspiration from the Hanging Gardens of Babylon.

The research team that designed the 73-foot (22.5-meter) tall sculpture, named “Semiramis” after Queen Amytis, for whom King Nebuchadnezzar II built the Hanging Gardens of Babylon, is led by professors from ETH Zurich University in Switzerland.

The ancient city of Babylon was located near present-day Hillah in Iraq, about 50 miles south of Baghdad, on a branch of the Euphrates River.

The tribute structure will be made of five wooden pods that are slightly offset from each other and suspended by eight steel pillars, ETH Zurich said. Each pod comprises 70 wooden panels.

What makes this design stand out, apart from its size, is that it was heavily influenced by the input of artificial intelligence and computer software.

The design of a structure like this would typically be adjusted by architects, potentially dozens of times, as they try to meet all building code standards. This costly and time-consuming process was bypassed using AI.

The Swiss Data Science Center collaborated on the development of the AI that helped produce the sophisticated design.

The algorithm suggested creating wooden pods of varying size and shape, noting how each design affected variables such as the irrigation of the pods.

“The computer model lets us reverse the conventional design process and explore the full design scope for a project. This leads to new, often surprising geometries,” said Matthias Kohler, a professor of architecture and digital fabrication at ETH Zurich.

At ETH’s Immersive Design Lab, the team used augmented reality to create a 3D design that allowed the researchers to make small adjustments and see the effects of these changes in real time.

Software developed in collaboration with ETH’s Computational Robotics Lab helped the researchers measure overall changes to the wooden pods each time a small adjustment was made.

The design is now being built at the Robotic Fabrication Laboratory at ETH Zurich.

The arms are managed by an algorithm that makes sure they never reach for the same panel or bump into each other.

Once the panels are assembled, craftsmen glue them together with a special casting resin.

The robotic arms have several advantages over humans: they can lift heavy weights, are extremely precise and can work nonstop barring a loss of power.

“Semiramis has been a beacon project for architectural research, bringing together people inside and outside ETH and advancing the key research topics of the present, such as interactive architectural design and digital fabrication,” said Kohler.