The cub, born on Sept. 3, goes exploring in her outdoor enclosure at a German zoo.
By Lee Bullen November 27, 2021
Facebook
Twitter
Linkedin
Email 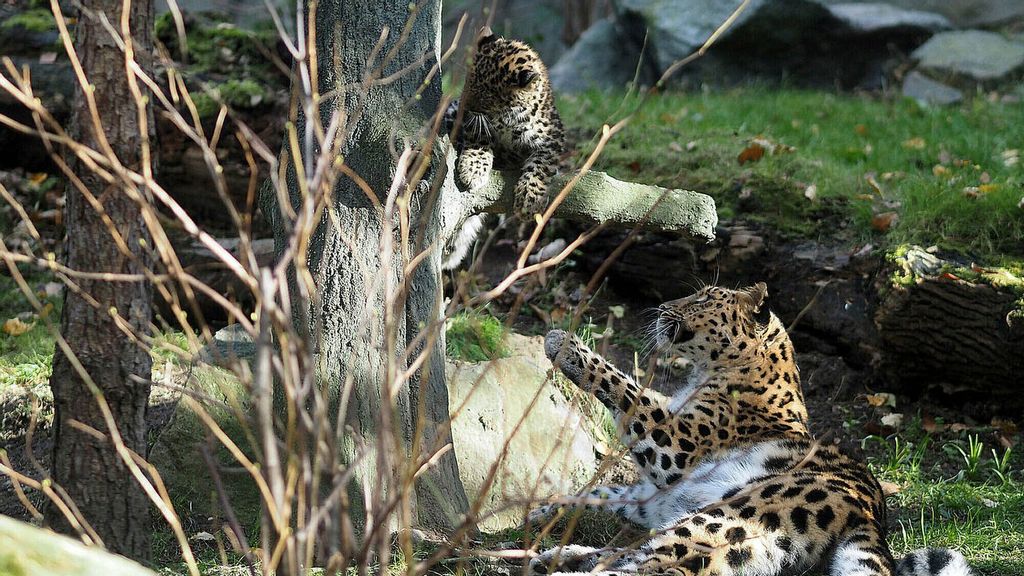 Amur leopard cub Manju explores the outer enclosure in the Leipzig Zoo in Germany, with its mother. (Zoo Leipzig/Zenger)

Video shows an endangered Amur leopard cub exploring its outdoor surroundings with its watchful mother at a German zoo.

The Amur leopard cub, which was born at the animal park on Sept. 3, has started exploring the Leopard Valley enclosure with her 8-year-old mother, Mia. Manju weighs nearly 11 pounds and is developing very well, according to the zoo.

Manju likes to nibble on small pieces of meat and is not afraid of exploring her new play options in the outdoor enclosure, the zoo said. She particularly likes tree branches, bushes and rocks.

Mia also seems to enjoy playing with her offspring and appears very vigilant when Manju sneaks away.

The Amur leopard is a leopard subspecies native to the Primorye region of southeastern Russia and northern China.

“People usually think of leopards in the savannas of Africa, but in the Russian Far East, a rare subspecies has adapted to life in the temperate forests that make up the northernmost part of the species’ range. Similar to other leopards, the Amur leopard can run at speeds of up to 37 mph. This incredible animal has been reported to leap more than 19 feet horizontally and up to 10 feet vertically,” according to the World Wildlife Fund.

In the video posted by the zoo, the cub can be seen frolicking with her mother, and the two of them playfully stalk each other in the overgrowth before Mia pins the cub on the ground and nibbles at Manju before she runs off.

“Leipzig Zoo registered Manju as the first cub to be born in Europe this year, according to the European Endangered Species Program,” said the zoo’s director, Jorg Junhold. “Therefore, we are all more than pleased to be able to announce the first offspring in 2021.

“Because the rarest big cat species and the rarest mammal in the world is threatened with extinction, we have been able to make an important contribution to the conservation of the species.”

He said only between 100 and 250 Amur leopards remain in the wild.

The main reasons for their drop in numbers are, among other things, poaching and habitat destruction.