A community call-in effort helps save 11-month-old feline from a high perch. 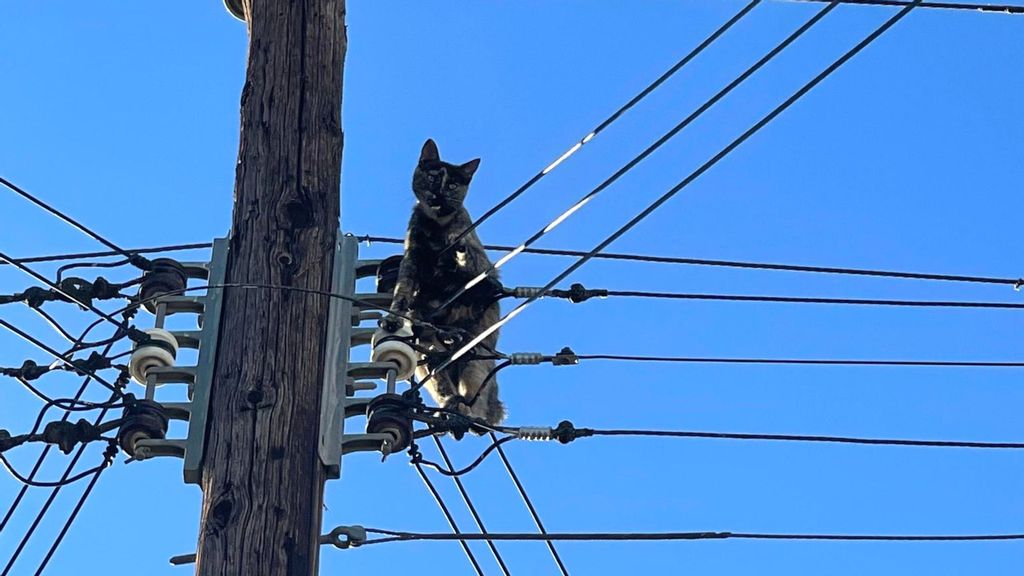 Ruth, an 11-month-old kitten, was stranded for four days on a utility pole in Riverside, California. (Heather N Adrian Padilla/Zenger)

Video shows a kitten being rescued from the top of a utility pole, after a community in Riverside, California, rallied to her aid by calling on authorities to rescue her.

The cat’s owner, Heather Padilla, said Ruth is 11 months old and “very outgoing, loving and so friendly. Too friendly — she would let anyone pick her up.”

Ruth darted outside and when she did not return for four days, Padilla said she started posting on local neighborhood lost-and-found sites, “hoping someone had seen her or taken her in thinking she was a stray.”

“About the fourth day she was gone, I was headed to work walking to my van, and she saw me and started meowing. I looked everywhere in the backyard the front yard, I was looking over our brick wall thinking she was stuck in the neighbor’s yard, she sounded so close but so far away at the same time.

“I said her name and she faintly cried. I finally looked up, and she was at the top of an electric pole three houses down from us. It was really sunny out that day and the sun was glaring in my eyes and I had to do a double-take because she blended in with the wooden pole.

“We think the neighbor’s dogs scared her,” Padilla said. “I think that she got scared and ran up the pole and she was not coming down for anything.”

“I called the electric company, and they said that they wouldn’t come out for a cat and that they weren’t going to shut down power.

“Finally, on the second day she was up there, I couldn’t stop thinking that she was going to die if I couldn’t get somebody to get her down. It’s so hot during the day and very cold at night. She probably hadn’t eaten for the four whole days she was missing, and then she’s at the top of this pole for two days, she was so dehydrated, you could tell she was just weak.

“So I called … the mayor, and I said that I had exhausted all my options, and she said she would do everything she could to help me try and get my kitty down.

“I think with a phone call from [the mayor] to the Imperial Irrigation District [electricity company] board and with all the phone calls from the community to the fire department and electric company, finally [the irrigation district] came out here and shut the power down for around 20 minutes and got my baby kitty down from the pole.

“It was so traumatic for me, my husband and my kids, I couldn’t eat or sleep I was so worried. We took her straight to the veterinarian, and they said she was fine. We brought her home and it took her a couple days, but she finally started eating again, and she slept for a solid three days. Finally, she is fine and full of life again.

“I’m making sure everyone in this house is extra careful of not letting her out because she is sitting at every door looking at us so sad because she wants to go outside, but I’m so fearful I don’t want her to get hurt.

“I’m so thankful for the word of mouth from everyone in this community and everyone that helped my baby kitty,” she said.

«Previous Post
That Moth Be A Record: Moth Species Survived 12,000 Years On Remote Mountain Peak»Next Post
VIDEO: I Can Spot You: Amur Leopard Cub Plays Hide And Seek With Mom