Thugs who teamed up with Hells Angels are found in possession of guns, knives, cocaine and cannabis, police say. 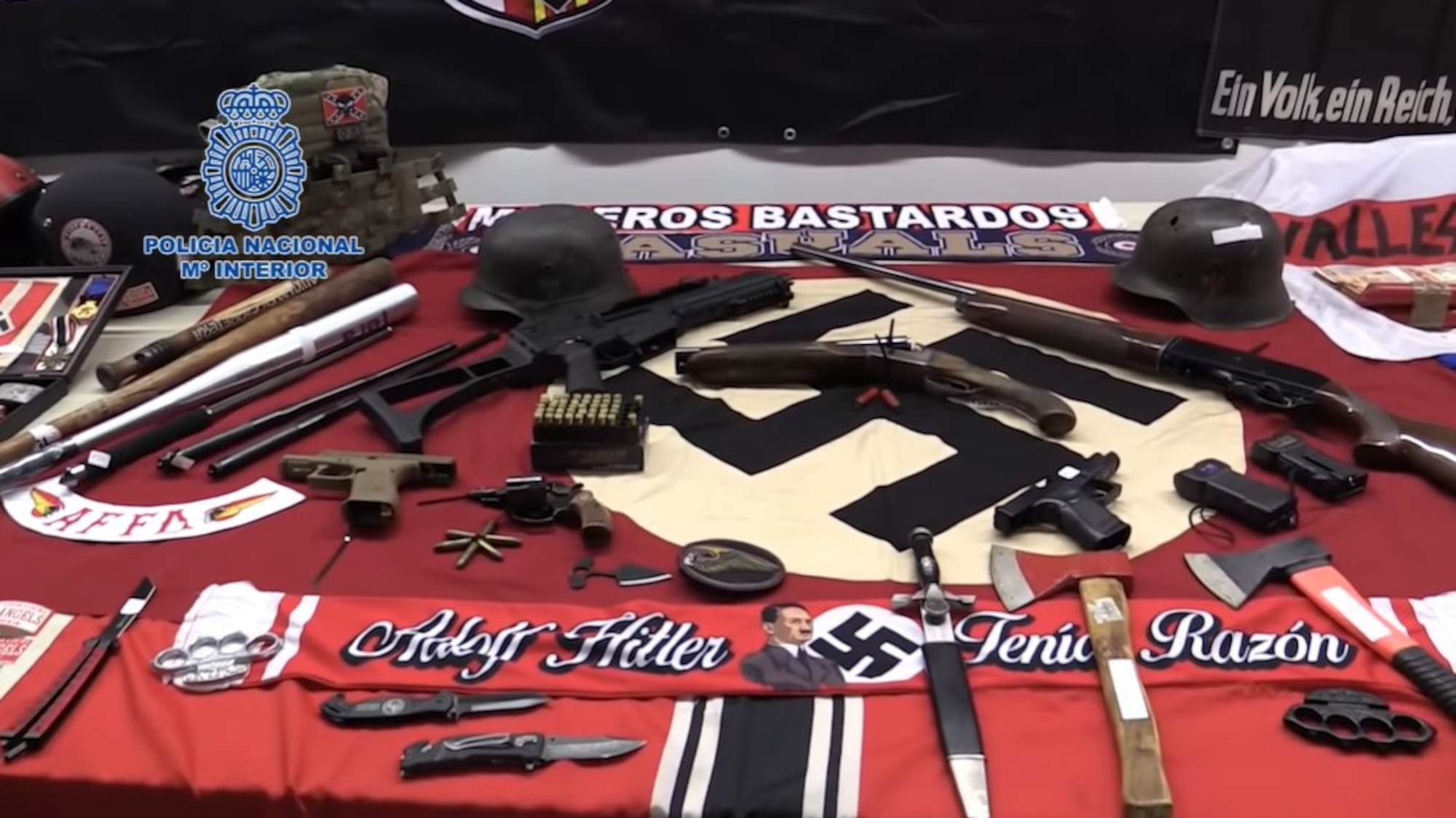 More than a dozen members of the Boixos Nois group in Spain have been arrested in a sweeping operation by Spanish police.

“The agents entered and searched 18 homes and premises, resulting in the seizure of 10 firearms, numerous knives, a kilo [2.2 pounds] of cocaine, more than 5,000 marijuana plants and 42 kilos [93 pounds] of buds, as well as different narcotic substances, like pink cocaine and hashish,” the National Police said on Nov. 25. Fourteen people were arrested.

Boixos Nois is an “ultra” that supports football club FC Barcelona. Ultras are groups of fanatical supporters of sports teams, known for their organization and violence.

“Numerous material of a supremacist nature has also been intervened, relating to this ultra-radical group ‘Boixos Nois’ and the motorcycle gang Hells Angels, to which one of its leaders belonged.”

The operation, directed by a court in Sabadell in the province of Barcelona, took place on Nov. 2.

“Those arrested led an extremely violent criminal organization with a marked multi-criminal nature [and] specialized in alleged crimes such as drug trafficking, coercive prostitution or the importation of illegal drugs,” the National Police said.

Police also said that more than 20 bank accounts have been blocked, three homes and 27 vehicles seized, and more than 300,000 euros ($339,000) in cash seized, allegedly from the illegal activities carried out by the organization.

The investigation began in the first quarter of 2020, police said, “when the investigators detected how this criminal network, whose link would be the ultra Boixos Nois group, acted as a true hierarchical and disciplined criminal organization, and with an excessive violent character that they manifested in front of other organizations and clans that tried to dispute their areas of action.”

“A significant event in this operation,” police said, has been the elimination of a source of coercive prostitution of women. “The economic returns resulting from this illicit activity became the basis for financing their activities, mainly related to attending musical and sporting events for the dissemination of hatred, hostility and violence towards other vulnerable or antagonistic groups.

“This radical faction would be the heir to the one known as ‘Casuals.’ dismantled a few years ago with the arrest and imprisonment of some of its members accused of extortion and kidnapping,” police said.

“The investigations continue under the direction of the titular judge of the Court of Instruction number 1 of Sabadell (Barcelona), who has received all the detainees … and has ordered the entry into prison for seven of them.

The Boixos Nois group was founded in 1981. “Since then, some of its members have participated in numerous attacks on ideologically antagonistic ultra groups and have been the target of different police operations mainly linked to drug trafficking, money laundering, extortion, threats, illegal detentions, violent attacks, etc.,” police said.

“One of the darkest moments in the history of this radical group was in 1991, when five of its members stabbed to death a 20-year-old supporter of RCD Espanyol de Barcelona in the surroundings of the old Sarriá Stadium,” police said.