Demand is at the very least holding near pre-pandemic levels despite looming concerns about inflation. 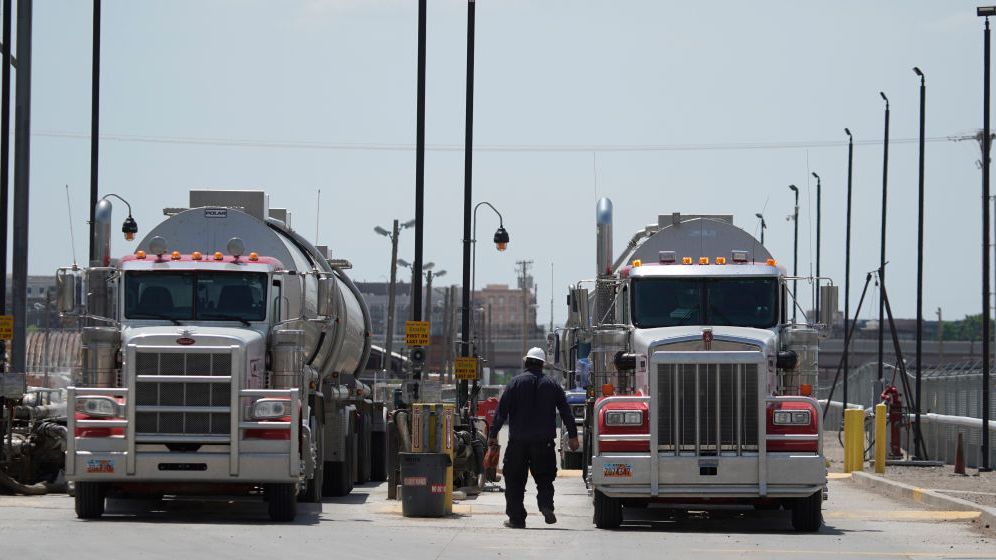 Drivers line up their tanker trucks to deliver crude oil to Marathon Oil to be refined into gas in Salt Lake City, Utah. (George Frey/Getty Images)

The U.S. Energy Information Administration, part of the Energy Department, publishes weekly data on commercial storage levels of fossil fuels, including gasoline. Gains usually indicate that demand turned lower, while the opposite holds for declines in inventory.

Tamas Varga, an analyst at London oil broker PVM, said demand looked supportive despite the higher level of inflation and the uptick in commodity prices. Total products supplied to the market during the reporting period, used as a barometer for demand, is close to 21 million barrels per day, which at the very least is near levels from before the onset of the COVID-19 pandemic in early 2020.

“If the EIA is a barometer of the U.S. economy, then the U.S. economy is in good health, at least this is what the demand figures imply,” he said, referring to the Energy Information Administration.

That’s in contrast to the latest survey of consumer sentiment from the University of Michigan, which found that inflation “combined with the absence of federal policies” to do anything about it are taking a toll on confidence.

“Consumers expressed less optimism in the November 2021 survey than any other time in the past decade about prospects for their own finances as well as for the overall economy,” the report read.

President Joseph R. Biden Jr. on Tuesday tried his hand at market control by announcing the government would release oil from strategic reserves in coordination with Asian and the U.K. economies. Most analysts said that would only have a temporary impact on crude oil and gasoline prices, which have been moving off from recent highs over the last few weeks.

However, the implied demand figure from total products supplied, as well as a report that showed consumer spending moved higher in October, paints another economic picture altogether.

That dichotomy was reflected in crude oil prices, which were hovering around even for most of the trading day on Wednesday. Tom Kloza, the president of the Oil Price Information Service, said that, at least for gasoline, trends may already be working in consumers’ favor.

“After this week, we really don’t see great demand until later in the first quarter 2022,” he said.

With COVID-19 vaccines readily available, U.S. travelers are expected to hit the road for the long Thanksgiving holiday. Many opted to stay home last year.

Elsewhere, Giovanni Staunovo, a commodities strategist for Swiss investment bank UBS, said there may be too many factors at play other than the Energy Information Administration report.

“Not sure the report matters so much, with market participants looking for new mobility restrictions in Europe and what OPEC+ does at their upcoming meeting,” he said.

Coping with an outbreak of new cases of COVID-19, many European nations have reimposed tight social restrictions as a preventative measure.

Some commentators have suggested OPEC+, the core members of the Organization of the Petroleum Exporting Countries and a handful of non-member states such as Russia, may decide to react to the coordinated decision to release oil from strategic reserves by standing firm with their conviction that the market doesn’t need more oil when they decide on output levels again next month.