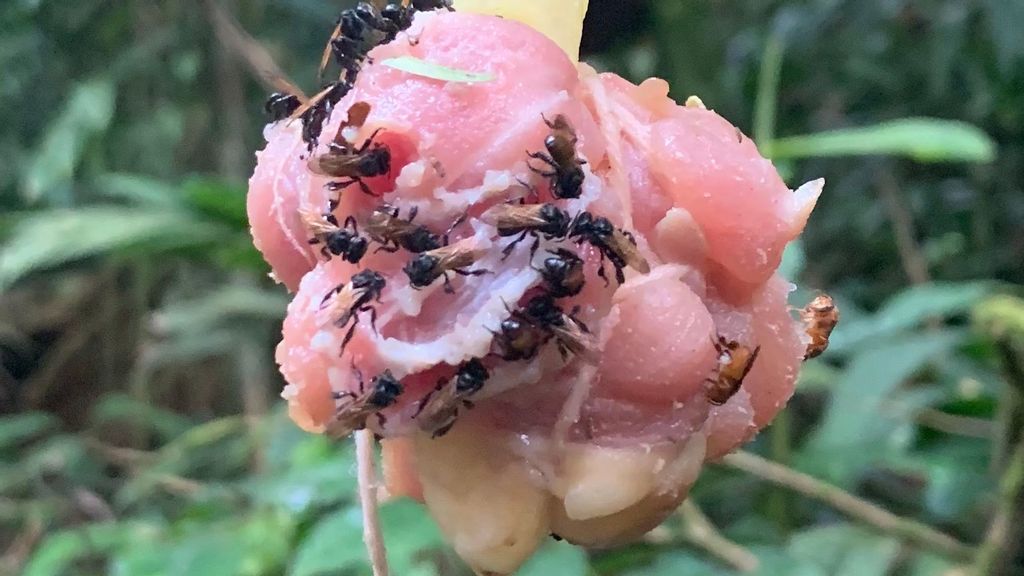 Researchers strung raw chicken from tree branches to act as bait for vulture bees in Costa Rica. These stingless bees feed on carrion, while most bee species are vegetarian. (Quinn McFrederick/UCR)

Although most bees are not carnivores, a few stingless tropical bee species have evolved a taste for flesh, presumably due to fierce competition for nectar, scientists say.

The so-called “vulture bees” evolved an extra tooth and their gut microbes are more like those found in vultures than in other bees. This allows them to feed on dead animals, or carrion.

“These are the only bees in the world that have evolved to use food sources not produced by plants, which is a pretty remarkable change in dietary habits,” said entomologist Doug Yanega of the University of California-Riverside.

Millions of years ago, bees evolved from wasps, which do eat meat albeit not exclusively. While some modern bees eat both pollen and meat, vulture bees are fully necrophagous, meaning they eat only carrion.

Other species, such as bumblebees, honeybees and other stingless bees typically have the same five core microbes inhabiting their guts.

“Unlike humans, whose guts change with every meal, most bee species have retained these same bacteria over roughly 80 million years of evolution,” said researcher Jessica Maccaro, co-author of the study published in the journal mBio. The researchers found gut bacteria in vulture bees differed greatly from those in other bees, allowing them to feast on carrion.

Turkey vultures, widespread across the Americas, rely on strong gut bacteria to eat dead carcasses. Microbes such as Fusobacteria and the poisonous Clostridia make carcasses toxic for other animals but are merely a sauce for the winged flesh-eaters.

“The vulture bee microbiome is enriched in acid-loving bacteria, which are novel bacteria that their relatives don’t have,” said McFrederick. These bacteria resemble those in actual vultures and other animals that feed on carrion, according to McFrederick, “presumably to help protect them from pathogens that show up on carrion.”

The research team traveled to Costa Rica and used pieces of raw chicken strung from the branches of trees to bait the bees. The bait was smeared with petroleum jelly to fend off ravenous ants.

Vulture bees and related species were drawn to the meat. Stingless bees have structures on their hind legs resembling baskets to collect pollen. But meat-loving bees, the team found, use the same baskets to store meat. “They had little chicken baskets,” said researcher Quinn McFrederick. According to previous research, these meat-lovers are able to reduce a small corpse to bone in just a few days.

Some stingless bees feed on both flowers and meat while others feed only on pollen. The team looked at the gut microbiomes of all three types of stingless bees and found that the carnivorous species showed the most extreme changes.

“It’s crazy to me that a bee can eat dead bodies. We could get sick from that because of all the microbes on meat competing with each other and releasing toxins that are very bad for us,” said Maccaro.

Even though the bees have no stinger, they are not defenseless. “Many species are thoroughly unpleasant,” said Yanega. “They range from species that are genuinely innocuous to many that bite, to a few that produce blister-causing secretions in their jaws, causing the skin to erupt in painful sores.”

Though the bees feast on flesh, their honey is sweet. “They store the meat in special chambers that are sealed off for two weeks before they access it, and these chambers are separate from where the honey is stored,” said Maccaro.

The research team will continue to study the genomes of the bacteria, fungi and viruses they found to learn more about the evolution of bees. “The weird things in the world are where a lot of interesting discoveries can be found,” said McFrederick. “There’s a lot of insight [to be had] there into the outcomes of natural selection.”