A wildlife official safely led the young stag out of the trashed classroom. 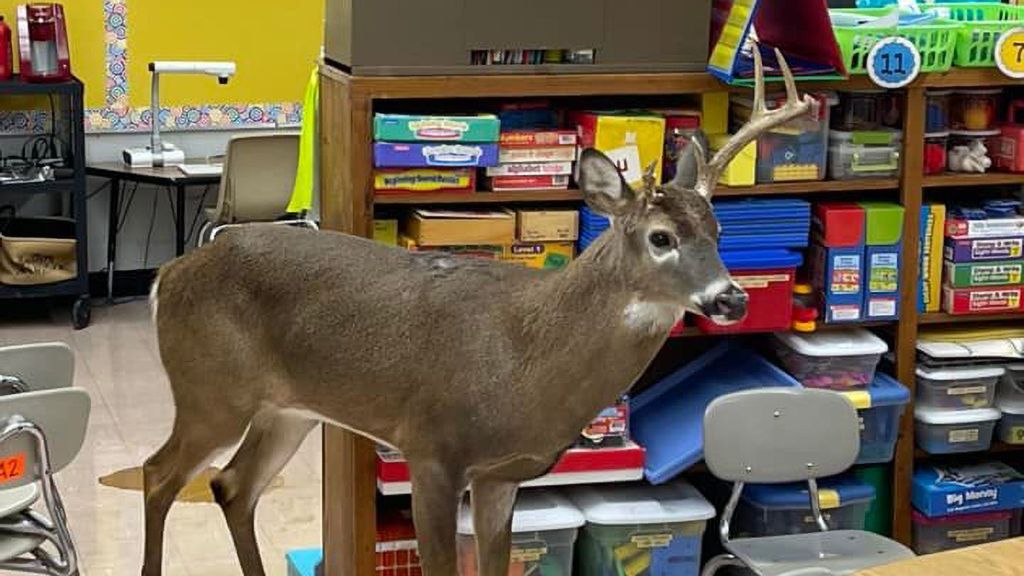 A deer crashed a Robertson County elementary school in Springfield, Tennessee on Nov. 23.  His broken antler may have happened during a fight with a rival. (Tennessee Wildlife Resources Agency/Zenger)

A wildlife officer encountered a white-tailed buck after it broke into a Tennessee primary school and spent the night wrecking a classroom.

The incident took place at the Westside Elementary School in Springfield, Tennessee, on Nov. 23.

Stratton said: “So, how’s everybody else’s morning going today? This guy has had a rough one!”

He then pans around the wrecked classroom before laughing and focusing on the calm deer, which is missing an antler, possibly after fighting a rival for a love interest during mating season. Sexually mature males, known as bucks, grow antlers in the spring/summer of each year.

As Stratton enters, the buck stands at the far side of the room. Showing no fear, he walks toward the wildlife official, stopping just short of touching distance to size up the new arrival.

The Tennessee Wildlife Resources Agency (TWRA) shared the images on social media with the message: “Surprise student at Westside Elementary in Springfield this morning.

“Officer Kaleb Stratton was called to the school to remove the individual, who had apparently broken his way in through an emergency exit.”

“The 2.5/3.5-year-old white-tail buck was in good spirits and allowed Officer Stratton to lead him to an exit. Today, teachers are teaching the 4 R’s at Westside. Reading, Righting, Rithmetic and Rut!”

The agency also shared a selfie taken by the officer. He smiles at the camera with the buck in the background.

During his enforced stay in the playroom overnight, the deer wreaked havoc. He left a puddle on the floor and deposited pellets that mixed among the toys, pencils and furniture. He also knocked chairs and tables over.

The officials earned praise from online commentators for removing the animal safely. Many said the young buck would be a magnificent stag when it grew to adulthood.

Wildlife officials speculated the buck may have been chasing a doe when it entered the school, since it is mating season. Or, it could have seen its reflection and thought there was another buck in the area.

A buck usually refers to immature males. A stag refers to fully grown males. The buck may weigh an average of 150 pounds, and stands 5 feet to 6 feet long, and 3 feet high at the shoulder. Antlers remain on the bucks until after the breeding season, when they are shed.

Female deer give birth to one to two young each year. Young fawns have white spots on their coats, which act as camouflage from predators.

White-tailed deer are found throughout Tennessee, even in urban and suburban areas.